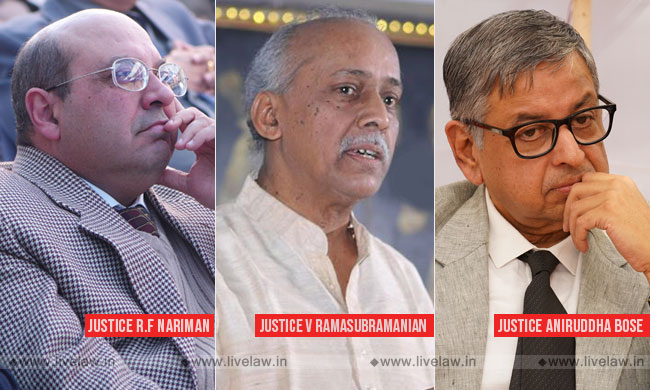 Supreme Court has held that the High Court can exercise its powers under Article 226 of the Constitution, if NCLT has passed an order pertaining to a matter falling under the realm of public law.The Division Bench of Justice Nariman, Justice Bose and Justice Ramasubramanian held that wherever the corporate debtor has to exercise a right that falls outside the purview of the IBC, 2016,...

Supreme Court has held that the High Court can exercise its powers under Article 226 of the Constitution, if NCLT has passed an order pertaining to a matter falling under the realm of public law.

The Division Bench of Justice Nariman, Justice Bose and Justice Ramasubramanian held that wherever the corporate debtor has to exercise a right that falls outside the purview of the IBC, 2016, especially in the realm of the public law, they cannot, through the resolution professional, take a bypass and go before NCLT for the enforcement of such a right.

In the present case, the court had to rule upon the following questions of law:

b. Whether questions of fraud can be inquired into by the NCLT/NCLAT in the proceedings initiated under the Insolvency and Bankruptcy Code, 2016,

Karnataka in a writ petition, staying the operation of a direction contained in the order of the NCLT, on a Miscellaneous Application filed by the Resolution Professional.

Appearing on behalf of the Resolution Applicant, Senior Counsel K.V. Viswanathan argued that the High Court should not have exercised powers, and especially against an order of the Chennai bench of NCLT, when section 61 of the IBC already provides for an effective alternative.

Mr Viswanathan went on to argue that remedies enshrined under the IBC are all pervasive and exclusive. Therefore, the only way through which the steps taken by the Insolvency Professional can be challenged is by taking recourse to IBC itself.

Supplementing these arguments, Senior Counsel Mukul Rohatgi submitted that though he would not go to the extent of saying that the jurisdiction of the High Court stood completely ousted, the High Court was obliged to switch over to the hands off mode, in matters of this nature.

Appearing for the Resolution Professional, Senior Counsel Kapil Sibal argued that if orders of NCLT are declared to be amenable to the writ jurisdiction of the High Court under Article 226, the whole purpose of the IBC would be defeated.

He also contended that the provisions of IBC, 2016 are given overriding effect under Section 238, over all other statutes.

Appearing on behalf of the Committee of Creditors, Senior Counsels Arvind Datar and E Om Prakash submitted that IBC being a complete code in itself, it doesn't provide any room for challenging the orders of NCLT, otherwise than a manner prescribed in the code itself.

On the other hand, Attorney General KK Venugopal argued that if a case falls under the category of inherent lack of jurisdiction on the part of a Tribunal, the exercise of jurisdiction by the Tribunal would certainly be amenable to the jurisdiction of the High Court under Article 226.

It was also argued by the Attorney General that NCLT can only review orders that arise out of inter-parties contractual matters. It cannot review orders passed by quasi-judicial/statutory bodies which fall in the realm of public law.

While dealing with the first issue, the court observed that the distinction between the lack of jurisdiction and the wrongful exercise of the available jurisdiction, should certainly be taken into account by High Courts, when Article 226 is sought to be invoked bypassing a statutory alternative remedy provided by a special statute.

The court agreed with the contention of the Attorney General, regarding the specialised body not allowed to deal with matters of public law, to hold that NCLT, being a creature of a special statute to discharge certain specific functions, cannot be elevated to the status of a superior court having the power of judicial review over administrative action.

'The NCLT is not even a Civil Court, which has jurisdiction by virtue of Section 9 of the Code of Civil Procedure to try all suits of a civil nature excepting suits, of which their cognizance is either expressly or impliedly barred. Therefore NCLT can exercise only such powers within the contours of jurisdiction as prescribed by the statute, the law in respect of which it is called upon to administer'.

On the issue of the jurisdiction of the NCLT in the facts of the present case, the court opined that a decision taken by the government or a statutory authority in relation to a matter which is in the realm of public law, cannot, by any stretch of imagination, be brought within the fold of the phrase "arising out of or in relation to the insolvency resolution" appearing in Clause (c) of Sub­section (5) of Section 60 of IBC.

On the issue of whether NCLT can look into the question of fraud, the court noted that section 69 makes an officer of the corporate debtor and the corporate debtor liable for punishment, for carrying on transactions with a view to defraud creditors. Therefore, NCLT is vested with the power to inquire into (i) fraudulent initiation of proceedings as well as (ii) fraudulent transactions.