#Breaking : In-House Committee Finds No Substance In Allegations Against CJI, Report Not Liable To Be Made Public 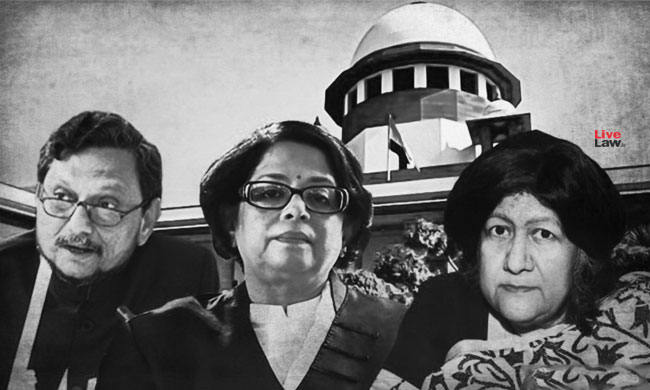 The In-House Committee which probed the sexual harassment allegations raised by a former woman employee of the Supreme Court against the Chief Justice of India Ranjan Gogoi has submitted its report.

The Secretary General of the Supreme Court has stated that the committee headed by Justice SA Bobde, also comprising of Justices Indira Banerjee and Indu Malhotra found no substance in the allegations contained in the complaint of the former employee of the Supreme Court.

Referring to Indira Jaising v. Supreme Court of of India, the committee said that the report of committee constituted as a part of the in-House procedure is not liable to be made public. In accordance with In-House procedure, the report dated 5 May 2019 has been submitted to next senior Judge competent to receive the report and also to the CJI, the Secretary General said in a press release.

The judgment above referred was delivered in the year 2003 while dismissing a petition filed by Senior Advocate Indira Jaising or the publication of the inquiry report made by a Committee consisting of two Chief Justices and a Judge of different High Courts in respect of certain allegations of alleged involvement of sitting Judges of the High Court of Karnataka in certain incidents.

It is pertinent to note that the judgment was delivered during a period when Freedom of Information Act was in force, a predecessor to Right to Information Act. While dismissing the contention raised by Senior Advocate Shanti Bhushan, who had appeared for Ms. Jaising, the bench had said: "Even the Freedom of Information Act, 2002, to which also reference has been made by the learned counsel of the petitioner, does not say in absolute terms that information gathered at any level in any manner for any purpose shall be disclosed to the public. The inquiry ordered and the report made to the Chief Justice of India being confidential and discreet is only for the purpose of his information and not for the purpose of disclosure to any other person. The principles stated in the above decisions are in different context and those principles cannot be invoked in a case of this nature, which is of exceptional category."

April 23: A panel of Justices Bobde, Ramana and Indira Banerjee gets constituted to probe the allegations levelled by the former Junior Court Staff.

April 30- Complainant decides not to participate in In-House enquiry any longer.

May 1: CJI Gogoi Deposes Before the committee.

May 6: Report submitted by the In-House Committee.