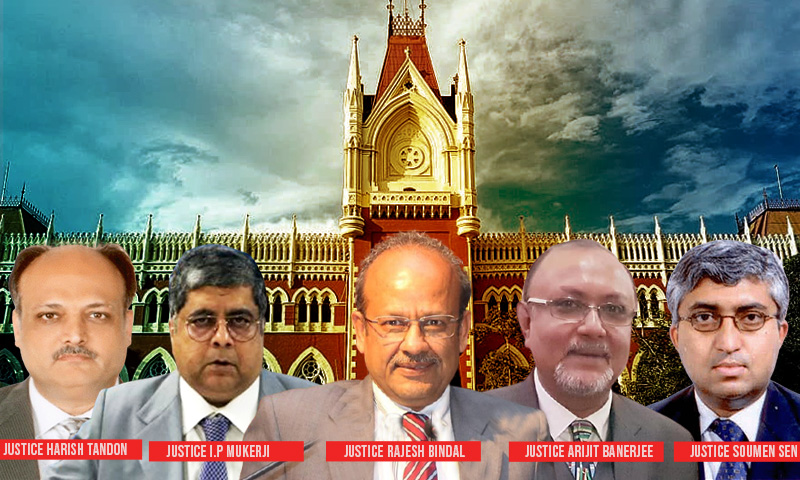 Hours after the Calcutta High Court referred the case pertaining to bail of four Trinamool Congress leaders, who have been in custody since May 17 since their arrest by the CBI in the Narada Scam Case, to a larger Bench, the Acting Chief Justice of Calcutta High Court Justice Rajesh Bindal has constituted 5 Judges' Bench to hear the matter.The Five Judges' Bench will consist of the Chief...

Hours after the Calcutta High Court referred the case pertaining to bail of four Trinamool Congress leaders, who have been in custody since May 17 since their arrest by the CBI in the Narada Scam Case, to a larger Bench, the Acting Chief Justice of Calcutta High Court Justice Rajesh Bindal has constituted 5 Judges' Bench to hear the matter.

The Five Judges' Bench will consist of the Chief Justice (Acting) Rajesh Bindal, Justice I.P. Mukerji, Justice Harish Tandon, Justice Soumen Sen, and Justice Arijit Banerjee, and the Matter would be heard on May 24 (Monday) at 11 AM.

While referring the matter to a larger Bench, in the meanwhile, the division bench today ordered that the four leaders— Ministers Firhad Hakim and Subrata Mukherjee, MLA Madan Mitra, and Sovan Chatterjee- be kept in house arrest and all medical amenities will be given to them.

Whereas Justice Arijit Banerjee has passed an order allowing interim bail, ACJ Bindal has disagreed and said that the four arrested TMC leaders must be kept in house arrest. In view of the split, the matter has been referred to a larger bench.

Significantly, since two of the arrested persons are Ministers in the newly-elected State Government and one of them is an MLA, the Court has permitted them to access files and meet officials through videoconferencing while under house arrest, to discharge their functions.

The Bench declined the requests made by the TMC leaders' counsels for their release on interim bail until the matter is heard by a larger Bench. However, it has allowed the leaders to access files, meet officials but only through VC. "Whatever work they are doing for the public, let it continue," it said.

The bench also rejected the request made by the CBI to stay the present order.

Senior Advocate Dr Abhishek Manu Singhvi, appearing for the TMC leaders, expressed his shock at the order as it has been passed mid-way of the hearing. He urged that the leaders be released on interim bail till the matter is heard by the larger bench, which should be constituted today itself.

"The interim situation should be freedom. These are Ministers, MLAs. There is no possibility of flight risk. There has been no slightest allegation of them not cooperating with investigation," he submitted.

To this, Justice Banerjee replied :

"One of the members of the bench thought it fit to grant interim bail. The other member of the bench did not agree. So, this point of interim bail has to be considered by the larger bench. In the meantime, considering the pandemic situation, house arrest has been given."

However, Singhvi pointed out that he made the interim bail plea at 4.30 pm on Wednesday when the court was about to rise; and the arguments were not complete.

He added that in case of house arrest, Ministers should also be given access to the files related to COVID work, vaccination, etc.

Senior Advocate Kalyan Bandopadhyaya, who represented the leaders before the Trial Court, also submitted that the leaders' absence is affecting Covid-related work. He stated that Firhad Hakim is working 24*7 for COVID vaccination-related matters and his presence is necessary for COVID work in Kolkata. "So necessary to give him access to files and permit him to meet officials," he urged.

He further pressed that the larger bench be constituted urgently and should hear the matter today at 2 PM itself, in the same spirit the High Court took up CBI's urgent plea against Trial Court order on May 17 at 5.30 PM.

Senior Advocate Sidharth Luthra, representing Sovan Chatterjee, submitted that the investigation is over and there is no requirement of custody. "Under what provision the custody will be given? Section 167?" he asked.

"This order was passed since interim bail plea was raised. Now it is surprising you are raising issues on merits after order," ACJ Bindal said.

He submitted that the Union has reservations about the Supreme Court judgment in Gautam Navalakha case, which has been relied on by the High Court to allow the house arrest of the TMC leaders.

The request was however declined. Complete minute-by-minute account of the hearing may be read here.

Background of the matter

On May 17, the bench had stayed the bail granted by the Special CBI Court at Kolkata to four Trinamool Congress leaders - Firhad Hakim, Madan Mitra, Subrata Mukherjee and Sovan Chatterjee - who were arrested dramatically by CBI on May 17.

On May 19, the bench had heard Solicitor General Tushar Mehta for the CBI, and Senior Advocates Dr Abhishek Manu Singhvi and Sidharth Luthra for the arrested TMC leaders. Singhvi and Luthra had prayed for interim bail on the ground that the accused are aged persons having comorbidities. The bench was told that three of the arrested persons were shifted to hospital and one of them, Sovan Chatterjee continued to be in jail.

Reports of hearing on May 19 :

Narada Case- "Do You Deny CM Sitting In Dharna In Front Of CBI Office"? Asks Court, "It Was A Means Of Democratic Protest": Dr Singhvi