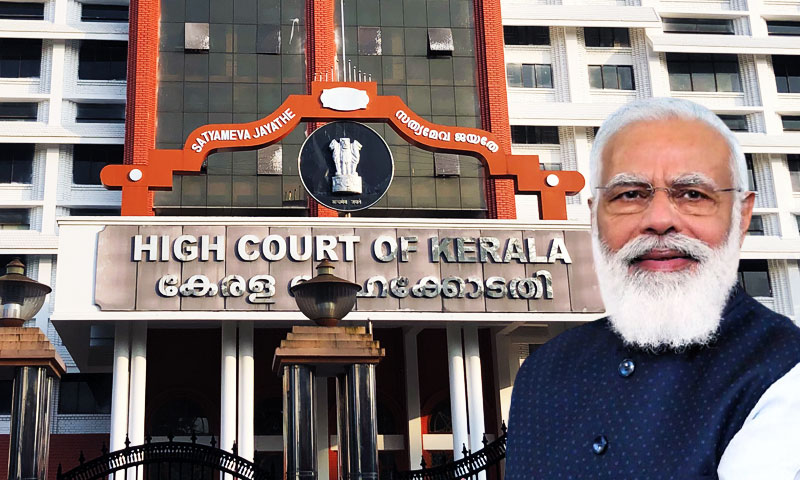 The Kerala High Court on Tuesday dismissed an appeal challenging the Single Judge order that rejected the plea challenging the photograph of Prime Minister being affixed on the Covid-19 vaccination certificates issued to citizens. The Single Judge had also imposed a whopping cost of 1 lakh on the appellant herein by the impugned order. A Division Bench comprising Chief Justice S....

The Kerala High Court on Tuesday dismissed an appeal challenging the Single Judge order that rejected the plea challenging the photograph of Prime Minister being affixed on the Covid-19 vaccination certificates issued to citizens. The Single Judge had also imposed a whopping cost of 1 lakh on the appellant herein by the impugned order.

A Division Bench comprising Chief Justice S. Manikumar and Justice Shaji P. Chaly, while dismissing the appeal, noted that a photo is not an advertisement.

"The Prime Minister has a right to give a message. Right to vote cannot be linked to it."

Agreeing with the decision of the Single Judge, the Court remarked that it will deliver the judgment in the matter later on.

The appellant appearing through Advocate Ajit Joy had argued that the Single Judge had dismissed the petition and imposed a cost of Rupees One Lakh on the appellant without properly appreciating the facts and the Constitutional provisions involved.

It was submitted that the Single Judge had erroneously proceeded to hear and dismiss the petition, assuming it to be posted for admission.

However, the petition was already admitted by another judge. Yet without even waiting for the counter affidavit of the respondents, the Single Judge proceeded to hear the matter as if it was posted for admission hearing and dismissed the same by the impugned judgment.

He reiterated that the COVID-19 Vaccination certificate issued in his name, with personal details and record of a medical event, is his personal space that the insertion of a photograph and message without his consent when objected to, is violative of the Fundamental Right of Freedom of Speech and expression under Art 19 (1) (a) of the Constitution of India.

It was further argued that such messaging and photograph is compelled hearing and compelled viewing prohibited by Article 19 (1) (a), and covered by the 'liberty of thought' as in the Preamble and the right to privacy.

"Holders of vaccine certificates are 'captive audience' upon whom the state has a greater responsibility not to impose unwanted content. Such objected content has been inserted into the certificate without the backing of any law. The appellant is aggrieved that the Learned Single Judge considered the above frivolous contentions," reads the appeal.

The appellant further submitted that the general campaign associated with the response to the COVID-19 pandemic, culminating in the certificate, in all of which the Prime Minister is prominently and ubiquitously shown on the public expense, leads to the colouring of the petitioner's rational and critical thought. This was, in turn, a distortion of the petitioners right to vote, including exercising free choice, it was argued.

In addition, this public campaign violates the Supreme Court guidelines in the Common Cause case (2015) 7 SCC 1  where it was held that Government advertising shall maintain political neutrality and avoid glorification of political personalities and projecting a positive impression of the party in power…"

The appellant pointed out that these contentions were not considered by the Single Judge.

However, the Division bench found no reason to interfere with the order of the Single Judge. It was also non-committal on reducing the cost imposed on the appellant.

Also Read: It Is The Duty Of Citizens To Respect The Prime Minister Of India : Kerala High Court