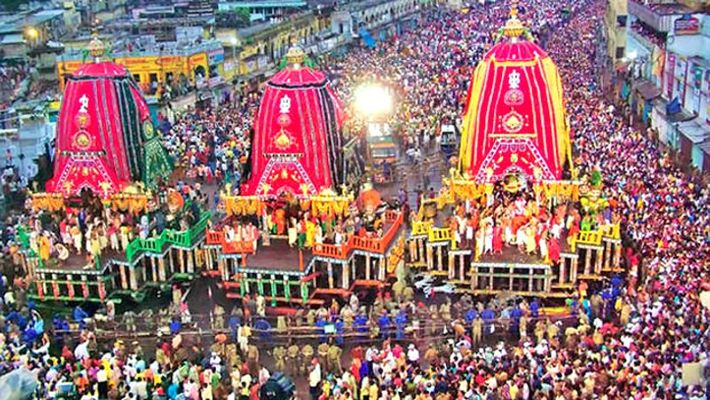 Modifying the absolute stay on conduct of Jagannath Rath Yatra in Odisha, the Supreme Court on Monday allowed the Rath Yatra at Puri, observing the strict restrictions and regulations of the Centre and the State Government.A bench headed by Chief Justice of India ordered that the Centre and State should "work in tandem". The following are the conditions :(1) All entry points into the City...

Modifying the absolute stay on conduct of Jagannath Rath Yatra in Odisha, the Supreme Court on Monday allowed the Rath Yatra at Puri, observing the strict restrictions and regulations of the Centre and the State Government.

A bench headed by Chief Justice of India ordered that the Centre and State should "work in tandem".

The following are the conditions :

(1) All entry points into the City of Puri, i.e., airports, railway stations, bus stands, etc., shall be closed during the period of Rath Yatra festival.

(2) The State Government shall impose a curfew in the City of Puri on all the days and during all the time when Rath Yatra chariots are taken in procession. The State Government may also impose curfew in the city of Puri on such other days and during such time as deemed necessary. During the period of curfew no one would be allowed to come out of their houses or their places of residence, such as, hotels, lodging houses, etc. To start with, the curfew shall begin tonight at 8 P.M.

(3) Each Rath, i.e.., Chariot, shall be pulled by not more than 500 persons. Each of those 500 persons shall be tested for the Coronavirus. They shall be permitted to pull the chariot only if they have been found negative. The number 500 shall include officials and police personnel.

(4) There shall be an interval of one hour between two chariots.

(5) Each of those who is engaged in pulling the chariot shall maintain social distancing before, during and after the Rath Yatra.

(7) The primary responsibility for conducting the Rath Yatra in accordance with the conditions and other norms shall be that of the Committee in-charge of Puri Jagannath Temple Administration. Each member of the Committee shall be responsible for due compliance with the conditions imposed by this Court and the general directions which govern ensuring of public health issued by the Union Government. In addition, the officers designated by the State Government for conduct of the Rath Yatra shall be responsible likewise.

(8) The rituals and the Rath Yatra shall be freely covered by the visual media. The State Government shall allow TV cameras to be installed at such places as may be found necessary by the TV crew.

(9) The bare minimum number of people shall be allowed by the Committee to participate in the rituals and in the Rath Yatra. We take a note of the fact that the State of Orissa has a good record of having controlled the pandemic with a very little loss of life. We see no reason why the same attitude of care and caution should not be applied to the Rath Yatra.

(11) The State Government shall maintain a record containing details of all those who have been allowed to participate in the Rath Yatra or the rituals connected therewith along with details of their medical conditions after testing.

The bench also clarified that the State Government will be at liberty to stop the festival in the event of any public health emergency.

The Central Government supported the modification of the stay order to allow the Rath Yatra after taking necessary precautions.

Solicitor General submitted that there are guidelines of the Central Government, as per which the Rath Yatra can be carried out without compromising health and safety.

He asserted that no compromise shall be made while carrying out the Puri Rath Yatra in terms of health and safety.

"Traditions of centuries cannot be stopped. It is a matter of faith for crores. If Lord Jagannath will not come out tomorrow, he cannot come out for 12 years as per traditions", the SG had submitted in the morning.

Senior Advocate Ranjit Kumar, appearing for the original petitioner Odisha Vikas Parishad, expressed concerns about the rise of COVID-19 cases in the state. He pointed out that the Rath Yatra goes on for "10 to 12 days".

The application for modification was moved by Jagannath Sanskriti Jana Jagaran Manch challenging stay imposed on the annual Rath Yatra on the ground that Odisha Vikas Parishad - the original petitioner - had concealed material facts and had not apprised the court of requisite arrangements ensuring social distancing.

Though the petition was originally listed before a bench headed by Justice Arun Mishra, it was later considered by a bench comprising CJI S A Bobde (who was at his Nagpur residence), Justice Dinesh Maheshwari and AS Bopanna. The shift happened after the Solicitor General made a mention before Justice Arun Mishra in the morning, seeking the conduct of the Rath Yatra on conditions.

Stating that Odisha High Court had already decided on the issue, the applicant drew court's attention to the order passed by HC on June 9, wherein due consideration had been given to all precautionary aspects.

Vide this order, the State Government had been given authority to take a decision about the Rath Yatra after ensuring all arrangements were consistent with the relevant directives issued by the Centre and State guidelines

In light of this, the applicant detailed the precautions undertaken to ensure all guidelines were followed to carry out the Yatra on June 23.

"The Deba Snan Purnima ritual was performed on 05.06.2020 with the help of 800 servitors. Before performing the ritual all the 800 servitors had undergone the COVID Test and all are found negative. The 800 servitors are in isolation for more than 1 month as on today…"

Further, it is emphasised that while the occasion usually witnesses the presence of over 2 lakh devotees every year, this year, the State Government and District Administration had issued guidelines to impose Section 144, thus disallowing any devotee from watching the 'darshan'.

Attempting to address the Top Court's concern regarding public health and safety, the Applicant urged that,

"The Rath Yatra can be performed with the help of 500-600 servitors by maintaining the social distance on the road of 3km stretch and by imposing restrictions as well as imposing Section 144 of CR.P.C."

Stating that customary practice of the temple has been carried out since times immemorial, applicant averred that the that stay order be reversed, especially since rituals enunciate a million sentiments.

On June 18, Top Court had ordered that no Rath Yatra should be held, keeping in mind the pandemic situation.

Agreeing to Petitioner's Counsel, Senior Advocate Mukul Rohatgi's submissions that allowing the Yatra would lead to a "catastrophic" situation, a bench headed by Chief Justice SA Bobde had ordered that the Chariot festival which attracts a congregation of nearly 10 lakh people in Bhubaneswar shall not be allowed in the interest of public health and safety of citizens.

CJI Bobde had observed "We are not allowing this. Lord Jagannath will not forgive us if we allow this to continue. Activities related to the Rath Yatra are injuncted"

The Court also ordered that no secular or religious activity associated to the Rath Yatra will take place this year in Odisha.

Senior Advocate Harish Salve, who represented the State of Odisha, also suggested that it would be better to stop the festivities.

Though some of the intervenors pleaded that rituals related to the Yatra should be permitted, the bench did not accept it.