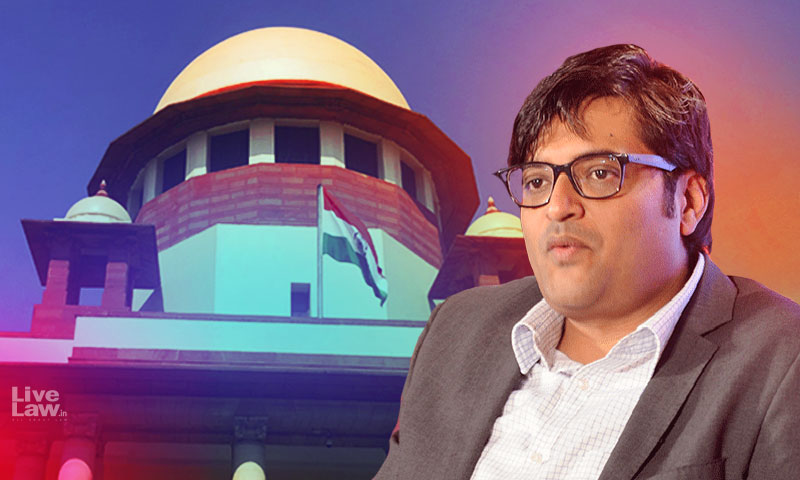 The Supreme Court on Friday granted Three weeks protection from arrest to Arnab Goswami, Editor-in-Chief of the Republic TV, on the basis of the FIRs filed against him in States of Maharashtra, Chhattisgarh, Madhya Pradesh, Rajasthan, Telangana and Jammu & Kashmir.A bench comprising Justices D Y Chandrachud and M R Shah said ' no coercive actions to be taken against him for two...

The Supreme Court on Friday granted Three weeks protection from arrest to Arnab Goswami, Editor-in-Chief of the Republic TV, on the basis of the FIRs filed against him in States of Maharashtra, Chhattisgarh, Madhya Pradesh, Rajasthan, Telangana and Jammu & Kashmir.

A bench comprising Justices D Y Chandrachud and M R Shah said ' no coercive actions to be taken against him for two weeks.

"Court intends to protect the petitioner for a period of Three weeks form today and permit him to move anticipatory bail application before the trial court or high court. For a period of two weeks, the petitioner shall be protected against any coercive steps in relation to the FIRs arising out of the telecast which took place on April 21"

The Bench also held that if there is any other FIRs filed thereafter, (arising out of or related to present cause of action) shall also remain stayed till further orders.

The Bench has directed the Commissioner of Police , Mumbai to give protection to Republic TV Office and the Petitioner

'The Petitioner must cooperate with investigation', said the Bench

"There is a place called #Palghar in Maharashtra, where persons were lynched in the presence of 12 police personnel...my client (#ArnavGoswami) bought out this incident on his daily show for 45 Minutes...."#PalgharMobLynching

Rohatgi submitted that the individual complainants could not be impleaded as his client had to file the petition in one day after the "murderous attack" on him and his wife on April 23.

"I have impleaded the States. I can implead the complaints also. Could not do, so since I had to file in one day because of the murderous attack on my client and his wife."

Senior Advocate Kapil Sibal, appearing for State of Maharashtra, submitted that the statements uttered by Goswami during the program were highly provocative, and that he communalized the Palghar lynching incident, and made vicious and tarnishing comments against Congress President Sonia Gandhi.

Sibal termed the petition as based on "fake freedom of speech".

He asserted that offences were clearly made out in the FIRs, and hence they could not be clubbed under an omnibus petition filed under Article 32.

Is Goswami a "privileged person" that no investigation can be carried out against him, Sibal asked.

Senior Advocate Dr AM Singhvi, appearing for State of Rajasthan, submitted that the offences under Sections 153A and 153B of IPC are non-bailable.

The FIRs were filed alleging that the news debates led by him on the Palghar lynching incident in Maharashtra amounted to promotion of enmity between groups, creation of communal disharmony, promotion of feeling against national integration etc. The FIRs mentioned offences under Sections 153A, 153B, 295A, 500, 504, 505 etc of the Indian Penal Code.

In the writ petition filed in the Supreme Court under Article 32 of the Constitution, the Republic TV Editor-in-Chief contended that the FIRs were in response to the broadcasts made by his channel linking Congress to the Palghar incident.

He contended that the FIRs were lodged at the instance of Indian National Congress to "coerce, harass and intimidate the petitioner in order to muzzle the media and in particular the petitioner, and conducting investigative journalism to bring the truth before the public". Therefore, the criminal actions resulted in the infringement of his fundamental right to speech under Article 19(1)(a) of the Constitution, the petition stated.

Goswami stated that following the news broadcast against Congress, there was a coordinated attack against him in social media. He added that he had to face attack from two individuals at the midnight of April 23, while he and his wife were returning from the studio. Citing apprehensions about similar attacks in future, he sought directions to the Centre for protection to himself and his family members.

In the petition, Goswami asserted that his news programs on Palghar incident did not promote any sort of communal disharmony, and that the criminal actions against him were result of the offence taken by Congress party.

"Contrary to the tenor of allegations in the complaints filed against the Petitioner, the Petitioner has time and again encouraged and used the platform of its channel to foster communal harmony, especially in the present critical time of the COVID-19 pandemic. In fact, the Petitioner has been strongly opposed to any propagation of any communalization by various other political parties for their own vested interests.

It is inconceivable that the broadcast aired on 21 April 2020 in relation to the Palghar incident could have incited any communal tension and it is apparent that only one political party is taking offence on the broadcast."

The allegations in the Complaints and the FIRs are merely "conjectures and surmises" based on a "complete and vindictive misreading of only a miniscule part of the broadcast", the plea stated.

The Press Council of India condemned the attack on Goswami and issued a statement that "violence was not the answer even against bad journalism".