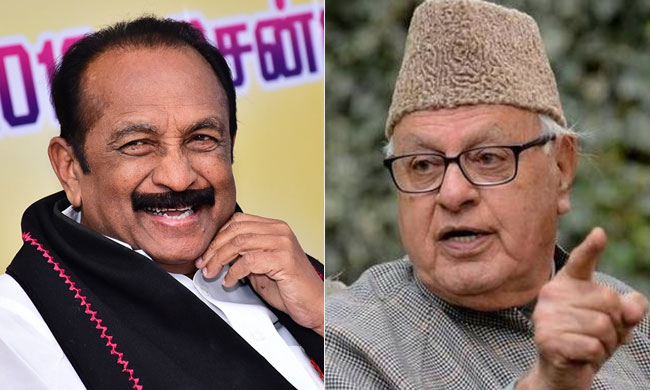 A Three Judge Bench comprising of Chief Justice Ranjan Gogoi and Justices S.A Bobde and Abdul Nazeer asked the Solicitor General Tushar Mehta if Abdullah was under detention. To this, the SG replied that he will get instruction.

The Solicitor General however opposed the issuance of notice to the Centre by saying that the petitioner had no locus standi. But the Court proceeded to issue notice and asked the Centre and posted the matter to September 30.

Significantly, the Union Home Minister Amit Shah had said in Lok Sabha that Abdullah was not under detention. This was on August 7 during the debate on the J&K Reorganization Bill and Article 370 resolution. Responding to the query as to why Abdullah was not present in the important Parliament debate concerning J&K, the Home Minister said that he was neither under arrest or detention, and was absent on his own will. This claim was denied by Abdullah, who said that he was detained in his own house.

Vaiko, who is a Rajya Sabha MP from Tamil Nadu, has sought a direction to the Union of India to produce the body of Dr. Farooq Abdullah before the Supreme Court and to set him at liberty so as to enable him to attend the conference at Chennai on September 15.

It was stated in the petition  that Abdullah, who was slated to attend a conference at Chennai on September 15 on the occassion of birthday of former Tamil Nadu CM C N Annadurai, has been unreachable since August 5 after the Central Government detained political leaders of the state and imposed curfew measures there following the abrogation of special status of J&K.

Vaiko had written to the Central Government on August 28 seeking permission to allow Abdullah to travel to Chennai; however, no response has been given to the letter, the petition states.

"The actions of the Respondents are completely illegal and arbitrary and violative of the right to protection of life and personal liberty,right to protection from arrest and detention and also against right to free speech and expression which is the cornerstone of a democratic nation", the petition argued.

"The Respondents have imposed an 'undeclared emergency 'in the State of Jammu and Kashmir and have placed an entire state in lockdown for the past one month and has further dealt a body-blow by arresting democratically elected representatives who were instrumental in strengthening democracy in the state" the petition added.