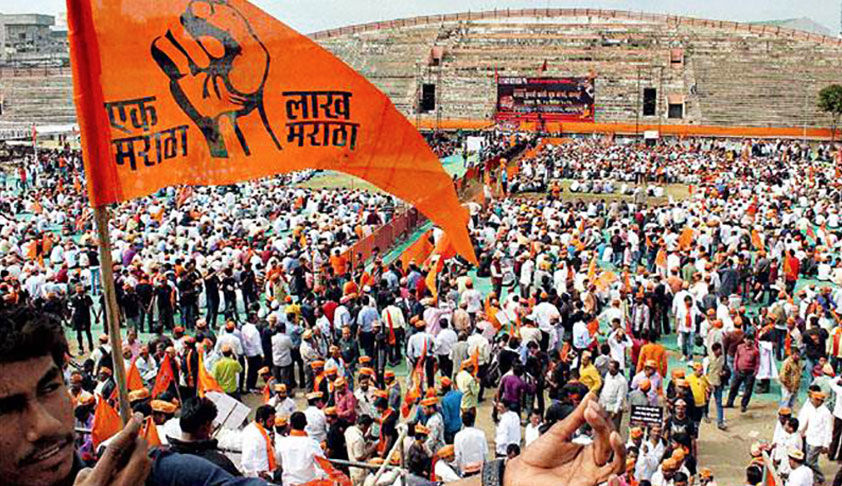 A 3-Judge Bench of the Supreme Court has stayed the operation of the Socially and Educationally Backward Classes Act, 2018, which granted Maratha quota, and has referred the issue to a Constitution Bench of 5 Judges or more for final adjudication.

The Bench comprising of Justices L. Nageswara Rao, Hemant Gupta and S. Ravindra Bhat further held that no appointments or admissions shall be made under the impugned Act for the year 2020-2021. However, the Post-Graduate admissions that have taken place till date shall remain unaltered.

Further, the matter shall be placed before the Chief Justice of India for the necessary orders pertaining to the issue of whether States can exceed the cap of 50% reservation as per the judgement of Indra Sawhney. In the previous hearing, the Supreme Court had heard arguments with respect to reference to an 11-Judge Bench of the issue pertaining to whether the State had the power to exceed the 50% reservation cap, as dictated by a 9-Judge Bench in the case of Indra Sawhney, and had proceeded to reserve the judgment.

The plea, challenging the Bombay High Court judgment passed in June 2019, submit that the Socially and Educationally Backward Classes (SEBC) Act, 2018, which provides for 12% and 13% quota to the Maratha community in education and jobs respectively, violates the principles laid in the case of Indira Sawhney v. Union of India (1992) as per which the Apex Court capped the reservation limit at 50%.

The Bombay High Court, while upholding the Maratha quota, held that 16% reservation is not justifiable and ruled that reservation should not exceed 12% in employment and 13% in education as recommended by Backward Commission.

Arguments regarding whether an interim order could be passed by the Bench had also taken place. A Bench of Justices L. Nageswara Rao, Hemant Gupta and S. Ravindra Bhat heard the matter as Senior Advocates Mukul Rohatgi, Kapil Sibal, Dr. Abhishek Manu Singhvi and Chander Uday Singh submitted their Rejoinder arguments in favour of the reference.

Senior Advocate Mukul Rohatgi had commenced his arguments by submitting to the Court that the Mandal Commission's report itself stated that there was a need for a review after a period of 20 years. However, 30 years had already gone by.

Rohatgi had further submitted that the Indra Sawhney judgement only dealt with Articles 15(4) and 16(4) of the Constitution of India, and Articles 15(5) and 16(5) had not been considered. Additionally, interpretation of Articles 15(6) and 16(6) was now before the Constitution Bench and therefore, the instant matter should be tagged with that.

"It is not appropriate for this case to be decided without that case being heard. So, it's better if this case is tagged with that one", submitted Rohatgi.

The impact of Articles 338B and 342A on Articles 15 and 16 was also raised as Rohatgi informed the Bench that the same had not been considered in Indra Sawhney. He further shed a light on the submission of Senior Advocate Arvind Datar who had argued for the instant matter being heard before the issue of reference was considered.

"A surprising submission was made by Datar in this matter. He said that the Court cannot refer this matter if the Court does not start hearing it. I don't know what that is supposed to mean! Any type of case which comes before the Court, if the Bench feels at any stage, even while issuing notice, that the matter can be referred, they can do so. My friend was wrong in his submission", stated Rohatgi.

In order to buttress this submission, Rohatgi had referred to the proviso of Article 145(3) and averred that it is settled law that the proviso and the main part of a provision must be construed together, and when the same is done in a wholesome manner, it becomes clear that the Bench can refer the issue at any stage.

Rohatgi continued, "Provisos cannot be read in isolation without the main provision. It is an emphasis of Article 145."

Rohatgi had concluded his arguments by stating that the issues of caste, reservation and poverty were all linked and therefore, had to be decided together as it was no longer a mere lis between just two parties.

Senior Advocate Kapil Sibal then began his submissions by informing the Court that the 50% limit was breached when constituent power was exercised by the Parliament. Further, the 9-Judge Bench in Indira Sawhney had kept the limit as exceeding 50% would have breached the Equality Clause, which was a part of basic structure.

"The Parliament has already breached the limit. When the constituent power is to be tested, it will be tested on the touchstone of Article 14, on the touchstone of the basic structure. The Union of India itself states that 50% does not stand in the way and it can be breached. This means that Indra Sawhney is no longer good law", submitted Sibal.

Sibal referred to Para 799 of the Indra Sawhney judgment which pertained to whether backward classes could be identified exclusively on the basis of economic criterion; the judgement had held that the same could not be the sole criteria.

"This question is bound to arise. And whichever way you look at it, it will impact the whole of India and the future of our country", stated Sibal.

At this juncture, Justice S. Ravindra Bhat had informed Sibal that even if the breach had been sanctioned, the question of whether it was constitutionally permissible was to be seen.

Justice Bhat continued, "You are not arguing on economic aspect at all. Your report is only on socially backward matters. 50% must be seen in that context. This breach must be seen in the context of a class which is not concerned with you at all".

Sibal responded that the Parliament, with its constituent power, created another class, by virtue of which another 10% had been reserved and increased the limit to 60%. If another class had been created, then that would lead to 70%. However, this failed to answer the basic question of what would be left with others.

He then referred to the findings of the Bombay High Court wherein it was stated that 85% of State of Maharashtra was backward. He submitted that Indra Sawhney was based on the 1991 census and it had been two decades since then. Therefore, the 50% limit should be allowed to be breached.

"50% is no longer the Lakshman Rekha. Chhattisgarh has 82% reservation, with Mizoram, Nagaland and others at 80%. The demographic has changed. In many States, there has been no development and the backward classes population has increased. This is for the Court to judicially decide. The pie has to be divided accordingly", concluded Sibal.

Senior Advocate Dr. Abhishek Manu Singhvi then began his submissions.He had stated that this was the first time the intersections of Articles 15(4), 16(4), 338 and 342A would be decided. He further pointed out the contradiction in the arguments of the Petitioners, who allegedly had framed the matter as a case pertaining to major Constitutional issues, and were now contesting against the reference of the issue.

Singhvi's second submission was that the proviso to Article 145(3) was meant to enlarge the scope of the Supreme Court's power and not limit it.

"It is a clarificatory proviso, which is meant to state that the reference can be made at any stage. Beginning, middle, end; you can refer it whenever. This proviso is only clarifying it. Also, the High Court can refer to the Supreme Court under Article 133, but the Supreme Court cannot do so? Where do you even get this from?", argued Singhvi.

Singhvi further submitted the Petitioners' argument would be a Constitutional prohibition on the powers of the Supreme Court and that would set a dangerous precedent.

"Every case has been referred at the threshold stage. Look at the Sabarimala reference, or even the issue with respect to the EWS reservation which was referred by the Chief Justice's Court in Janhit Abhiyan case".

Singhvi concluded his arguments by submitting, "Almost every State and Union Territory has exceeded the 50% cap. Keeping this substantial issue in mind, and acknowledging the lack of arguments on behalf of the Petitioners, please do consider referring the case".

Senior Advocate PS Patwalia had also argued for the matter to be heard with the case of Janhit Abhiyan as they dealt with the same core issues.

Senior Advocate CU Singh then commenced his arguments and sought to supplement the submission of Sibal by stating that Article 145(3) had to be read in a holistic manner. He asked the Bench that it had to be seen if the matter was "terra incognita" and that if it had not been decided before, then the it warranted reference.

"For the Petitioners to say that the law they are challenging violated basic structure, and then to say that the matter does not involve a substantial question of law, in my respectful submission, is completely contradictory", submitted Singh.