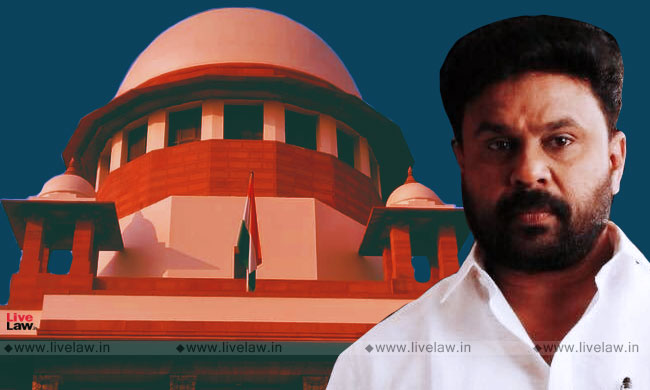 The Supreme Court on Friday held that Malayalam actor Dileep was not entitled to receive the copy of the memory card allegedly containing the visuals of the sexual crimes committed on a Kerala actress in February 2017A bench comprising Justices A M Khanwilkar and Dinesh Maheswari however has allowed him(or his lawyer) to inspect the video subject to conditions securing the privacy of...

A bench comprising Justices A M Khanwilkar and Dinesh Maheswari however has allowed him(or his lawyer) to inspect the video subject to conditions securing the privacy of the actress.

The apex court overturned the Kerala HC's finding that 'memory card' was a 'material object' and that the accused was not entitled to its copy under Section 207 of the Code of Criminal Procedure.

The visuals in the memory card qualify as a 'document' and the accused is entitled to its copy under Section 207 CrPC, held the top court. However, having regard to the privacy of the victim, the SC moulded the relief to Dileep, by ordering as follows :

"Considering that this is a peculiar case of intra­conflict of fundamental rights flowing from Article 21, that is right to a fair trial of the accused and right to privacy of the victim, it is imperative to adopt an approach which would balance both the rights", observed the Court.

"In conclusion, we hold that the contents of the memory card/pen drive being electronic record must be regarded as a document. If the prosecution is relying on the same, ordinarily, the accused must be given a cloned copy thereof to enable him/her to present an effective defence during the trial. However, in cases involving issues such as of privacy of the complainant/witness or his/her identity, the Court may be justified in providing only inspection thereof to the accused and his/her lawyer or expert for presenting effective defence during the trial. The court may issue suitable directions to balance the interests of both sides", concluded the Court.

The Court has also directed that the trial be completed expeditiously, preferably within a period six months.

The Court found the safeguards suggested by Dileep's lawyers, such as imposing watermarks on the cloned copies, to be non-effective in preventing misuse.

"With the advancement of technology, it may be possible to breach even the security seals incorporated in the concerned cloned copy", observed the Court.

Dileep is accused as the conspirator of the crime, which was allegedly committed in a moving vehicle in the suburbs of Kochi in February 2017.

In the petition in SC, Senior Advocate Mukul Rohatgi argued for Dileep that the visuals were doctored. The allegation in the chargesheet was that the actress was attacked in a moving vehicle; however, the visuals of the memory card were of a stationary vehicle. Dileep's lawyers were not shown a single continuous video, but a collection of several edited clips, which contained audio of strangers' voices. To establish the innocence of Dileep, it is highly essential to have copy of the memory card, submitted Rohatgi.

The Government of Kerala opposed the petition saying "If the copy of the footage is given without taking into consideration the Fundamental Rights and the Right of Privacy of the victim, the same will adversely affect the case of the prosecution".

It further stated that Dileep and his lawyers have already watched the visuals in the memory card in the chamber of Judicial First Class Magistrate, and no prejudice was caused to him due to its non-supply.

The Kerala High Court had dismissed the plea holding that memory card in the case amounted to a material object and not a documentary evidence.

"The crux of the prosecution allegation is that, offence was committed for the purpose of recording it on a medium. Memory card is the medium on which it was recorded. Hence, memory card seized by the police itself is the product of the crime. It is not the contents of the memory card that is proposed to be established by the production of the memory card", observed Justice Sunil Thomas in the High Court judgment.

On that basis, the HC held : "Memory card itself is the end product of the crime. It is hence a material object and not a documentary evidence. Hence, it stands out of the ambit of section 207 Cr.P.C".