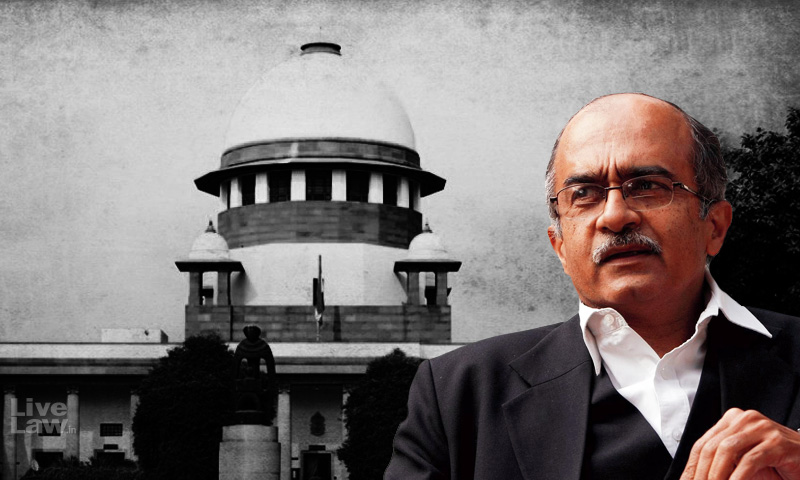 In the contempt case taken by the Supreme Court against Prashant Bhushan for his two tweets, a bench headed by Justice Arun Mishra on Monday sentenced him to pay a fine of Rupee One, which is to be deposited with the Supreme Court Registry within September 15.In case of default to deposit, Bhushan will have to undergo imprisonment for three months and will be debarred from practice in SC...

In the contempt case taken by the Supreme Court against Prashant Bhushan for his two tweets, a bench headed by Justice Arun Mishra on Monday sentenced him to pay a fine of Rupee One, which is to be deposited with the Supreme Court Registry within September 15.

In case of default to deposit, Bhushan will have to undergo imprisonment for three months and will be debarred from practice in SC for three years

Justice Arun Mishra, reading out the operative portions of the order of the sentence, observed that the statements made by the judges in the 2018 press conference, and the various opinions expressed by retired judges and academicians are irrelevant for consideration.

"We put a question to ourselves, as to whether the Court can be guided by such opinions expressed on the public platform and as to whether the Court while exercising its judicial duties render its decision on the basis of the trial made by the media and public opinion. Answer to both the questions are found firmly in the negative. The Court cannot abdicate its duty and has to be uninfluenced by the statements published in various articles published in the media and opinions expressed therein. It has to decide the case uninfluenced by  such opinions", the bench said

The Court further deprecated Bhushan for publicizing his statements in media before they were considered by the bench.

The Court said that it not only gave an opportunity for him to apologize but also "directly and indirectly, persuaded the contemnor to express regret". This was not heeded to by the contemnor and he gave wide publicity to his statements and gave media interviews, which further brought down the dignity of the Court, the bench observed.

Observing that the act of Bhushan is "a very serious one", the bench said :

"If we do not take cognizance of such conduct it will give a wrong message to the lawyers and litigants throughout the country. However, by showing magnanimity, instead of imposing any severe punishment, we are sentencing the contemnor with a nominal fine of Rs 1 instead", the bench said.

The bench also said that it has taken into account the advice given by the Attorney General to not punish Bhushan.

The Court said that from the very beginning, it was desirous of giving quietus to this matter.

"Directly or indirectly, the contemnor was persuaded to end this matter by tendering an apology and save the grace of the institution as well as the individual, who is an officer of the Court. However, for the reasons best known to him he has neither shown regret in spite of our persuasion or the advice of the learned Attorney General. Thus, we have to consider imposing an appropriate sentence upon him", it said.

"His conduct reflects adamance and ego, which has no place to exist in the system of administration of justice and in noble profession, and no remorse is shown for the harm done to the institution to which he belongs", the bench further said.

At one portion of the judgment, the SC observed that it was not "not afraid of sentencing the contemnor either with imprisonment or from debarring him from the practice".

"At the same time, we cannot retaliate merely because the contemnor has made a statement that he is neither invoking the magnanimity or the mercy of this Court and he is ready to submit to the penalty that can be lawfully be inflicted upon him for what the Court has determined to be an offence", the bench said next.

Prashant Bhushan order is out : SC says if it doesn't take cognizance of his conduct it will give a wrong message to lawyers & litigants.
"However, by showing magnanimity, instead of imposing any severe punishment, we are sentencing the contemnor with a nominal fine of Rs1" pic.twitter.com/6SdscbvakM

Senior Advocate Rajeev Dhavan, Bhushan's counsel, submitted that he was not seeking the mercy of the court and was seeking "judicial statesmanship".

Dhavan also submitted that punishing Bhushan will make him a "martyr".

A Supreme Court Bench Headed by #JusticeArunMishra To Pronounce The Judgemnt in a Contempt Case against @pbhushan1 Over His Two Tweets Today.