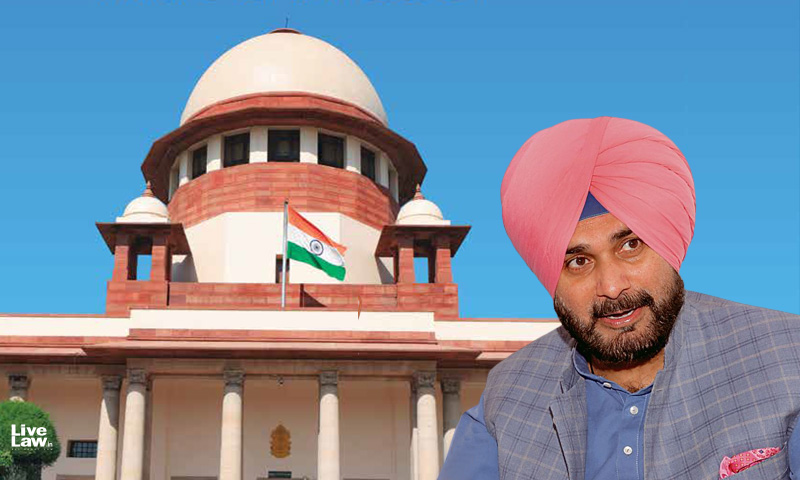 The Supreme Court on Thursday enhanced the sentence of Congress leader and former Indian Cricket team member Navjot Singh Sidhu to one year imprisonment in a 1988 road rage accident in which a 65-year old person named Gurnam Singh had died.

The Court allowed the review petition preferred by the family of victim Gurnam Singh against its 2018 Supreme Court verdict that had reduced the sentence of Navjot Singh Sidhu to a sentence of fine of Rs 1000 from 3 years imprisonment in the case.

A bench of Justices A. M. Khanwilkar and Sanjay Kishan Kaul pronounced the verdict to allow the review petition on the issue of sentence.

"We have allowed review application on the issue of sentence. In addition to fine imposed, we impose a sentence of imprisonment of one year to be undergone by respondent 1(Sidhu)", Justice Kaul read out the operative part of the judgment.

In May 2018, a division bench comprising Justice J Chelameshwar (since retired) and Justice SK Kaul had held that the offence of Sidhu will not amount to "culpable offence not amounting to murder" punishable under Section 304 Part II of the Indian Penal Code and instead found him guilty for the offence of "voluntarily causing hurt" under Section 323 IPC.

"The material on record leads us to the only possible conclusion that we can reach that the first accused voluntarily caused hurt to Gurnam Singh punishable under Section 323 IPC", said Justice Chelameswar in the Judgment. In 2006, the Punjab and Haryana High Court had convicted him under Section 304-II IPC and sentenced him to 3 years imprisonment. Reversing the High Court's findings, the Supreme Court had held that the cause of death was not certain and hence the punishment for culpabe homicide could not be sustained. It found fault with the High Court for concluding that the cause of death was subdural haemorrhage and not cardiac arrest.

"...the conclusion of the High Court that Gurnam Singh's death is caused by subdural hemorrhage but not cardiac arrest, in our opinion, is not based on any evidence on record and is a pure conjecture. We,therefore, find it difficult to sustain the conviction of the first accused and set­aside the same. Because to find a man guilty of culpable homicide, the basic fact required to be established is that the accused caused the death. But, as noticed above, the medical evidence is absolutely uncertain regarding the cause ofdeath of Gurnam Singh", the judgment authored by Justice Chelameshwar had held.

The incident occurred on December 27, 1988, at a traffic junction in Patiala, when a dispute relating to the right way of vehicles led to Sidhu pulling out the deceased from his vehicle and assualting him with fist blows.

Victim was a 65 year old person

While allowing the review, the Court noted that Sidhu was an international cricketer, who was tall and well built and aware of the force of a blow that even his hand would carry.

"The blow was not inflicted on a person identically physically placed but a 65 year old person, more than double his age. Respondent No.1 cannot say that he did not know the effect of the blow or plead ignorance on this aspect.It is not as if someone has to remind him of the extent of the injury which could be caused by a blow inflicted by him. In the given circumstances, tempers may have been lost but then the consequences of the loss of temper must be borne", the bench observed.

Necessary to have proprotionate sentence

The Court stated that maintaining a reasonable proportion between the seriousness of the crime and the punishment is necessary.

"While a disproportionately severe sentence ought not to be passed, simultaneously it also does not clothe the law courts to award a sentence which would be manifestly inadequate, having due regard to the nature of the offence, since an inadequate sentence would fail to produce a deterrent effect on the society at large. Punishments are awarded not because of the fact that it has to be an eye for an eye or a tooth for a tooth, rather having its due impact on the society; while undue harshness is not required but inadequate punishment may lead to sufferance of the community at large", the judgment stated.

Any undue sympathy to impose inadequate sentence would do more harm to justice system and undermine the public confidence in the efficacy of law. If the courts do not protect the injured, the injured would then resort to private vengeance and, therefore, it is the duty of every court to award proper sentence having regard to the nature of the offence and the manner in which it was executed or committed

"..a disproportionately light punishment humiliates and frustrates a victim of crime when the offender goes unpunished or is let off with a relatively minor punishment as the system pays no attention to the injured's feelings. Indifference to the rights of the victim of crime is fast eroding the faith of the society in general and the victim of crime in particular in the criminal justice system", the bench stated.

The bench however did not interfere with the conviction under Section 323 IPC.

Summary : 1988 Road Rage Case -Sentence awarded to Navjot Singh Sidhu enhanced to one year imprisonment - When a 25 year old man, who was an international cricketer, assaults a man more than twice his age and inflicts, even with his bare hands, a severe blow on his (victim's) head, the unintended consequence of harm would still be properly attributable to him as it was reasonably foreseeable - The indulgence was not required to be shown at the stage of sentence by only imposing a sentence of fine and letting him go without any imposition of sentence.

Indian Penal Code, 1860 ; Section 323 - The hand can also be a weapon by itself where say a boxer, a wrestler or a cricketer or an extremely physically fit person inflicts the same. This may be understood where a blow may be given either by a physically fit person or to a more aged person. (Para 24)

Indian Penal Code, 1860 ; Section 323 - Even though any harm might not be directly intended, some aggravated culpability must be attached if the person suffers a grievous hurt or dies as a result thereof. (Para 32)

Criminal Trial - Sentencing - Necessity of maintaining a reasonable proportion between the seriousness of the crime and the punishment - While a disproportionately severe sentence ought not to be passed, simultaneously it also does not clothe the law courts to award a sentence which would be manifestly inadequate, having due regard to the nature of the offence, since an inadequate sentence would fail to produce a deterrent effect on the society at large - A long period had lapsed by the time the appeal was decided cannot be a ground to award the punishment which was disproportionate and inadequate. (Para 25 -32)