[Breaking] 'This Case Is A Watershed Moment for Freedom of Speech, I Will Respectfully Pay The Fine While I Reserve My Right To Seek Review': Prashant Bhushan 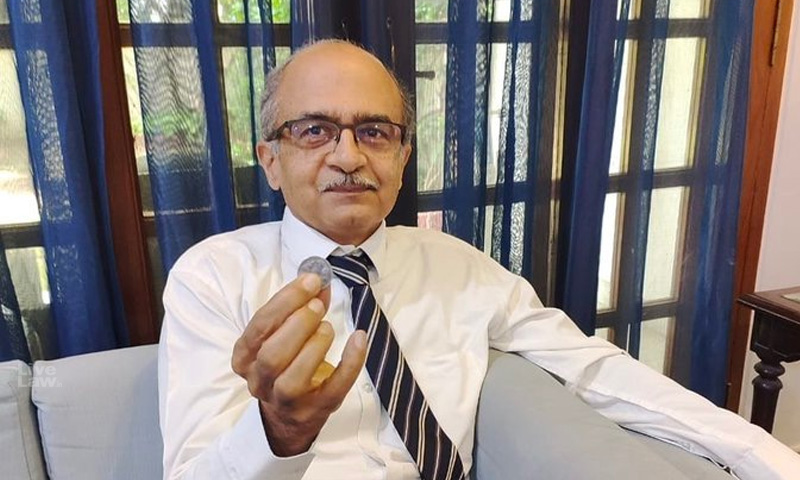 In response to the Supreme Court's pronouncement of the sentence in the contempt case, Advocate Prashant Bhushan addressed a press conference on Monday evening, stating that he will pay the fine of One Rupee imposed by the court, subject to his right to seek review of the verdict.

"The Supreme Court of India has announced its verdict on the contempt case against me. It holds me guilty of contempt of court and has decided to impose a fine of Re 1, and failing that imprisonment of three months and debarring me from practicing for three years. I had already said in my first statement to the Court: "I am here to cheerfully submit to any penalty that can lawfully be inflicted upon me for what the Court has determined to be an offence, and what appears to me to be the highest duty of a citizen" - Prashant Bhushan

A bench of Justices Arun Mishra, BR Gavai & Krishna Murari sentenced Prashant Bhushan to pay a fine of Rupee One, which is to be deposited with the Supreme Court Registry by September 15.

Bhushan has also stated that while he reserves the right to seek a review of the conviction and sentencing, he will respectfully pay the fine, just as he would have in case of any other lawful punishment.

He further states that he has the "greatest respect" for the institution of the Supreme Court and that he has always believed it to be the last bastion of hope, particularly for the weak and the oppressed who knock at its door for the protection of their rights, often against a powerful executive.

Bhushan has also reiterated his earlier stand that his tweets were not intended in any way to disrespect the Supreme Court or the judiciary as a whole, but were merely meant to express my anguish, at what he felt was a deviation from its sterling past record.

"This issue was never about me versus the Hon'ble Judges, much less about me vs the Supreme Court. When the Supreme Court of India wins, every Indian wins. Every Indian wants a strong and independent judiciary. Obviously if the courts get weakened, it weakens the republic and harms every citizen." - Bhushan in his statement

Bhushan goes on to express gratitude for the support and solidarity he received by countless persons, ex-judges, lawyers, activists and fellow citizens, who encouraged him to remain firm and true to his beliefs and conscience.

They strengthen my hope that this trial may draw the country's attention to the cause of freedom of speech and judicial accountability and reform.

Bhushan has also called his contempt case a "watershed moment for freedom of speech" which has encouraged many people to stand up and speak out against the injustices in the society.

"What is very heartening is that this case has become a watershed moment for freedom of speech and seems to have encouraged many people to stand up and speak out against the injustices in our society", he said.