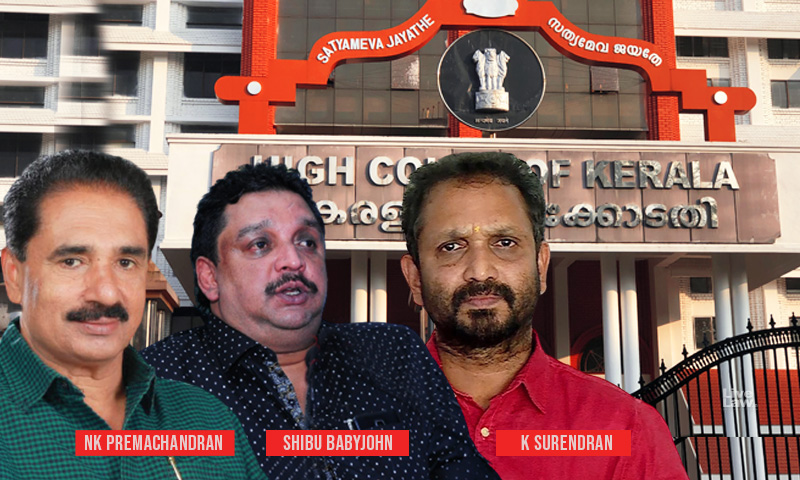 A batch of writ petitions in the nature of PIL have been filed before the Kerala High Court challenging the constitutional validity of Section 118A inserted in the Kerala Police Act, 2011 by way of an ordinance. "Section 118A is an attempt to resurrect the same approach to regulation of free speech that had been declared to be unconstitutional by the Hon'ble Supreme Court in...

A batch of writ petitions in the nature of PIL have been filed before the Kerala High Court challenging the constitutional validity of Section 118A inserted in the Kerala Police Act, 2011 by way of an ordinance.

The first petition is filed by MP and and former Minister NK Premachandran, former Minister and RSP Leaders Shibu Baby John and AA Azeez. Another petition has been moved by Kerala State BJP President K Surendran and the third plea is moved by a Delhi based Advocate, Jojo Jose.

The Petitioners have broadly contended that the Ordinance is an attempt to circumvent the Shreya Singhal judgment, whereby the Supreme Court had held that Section 118(d) of Kerala Police Act, violated right to free speech under Article 19(1)(a) of the Constitution of India.

As per Section 118(d), any person who causes annoyance to any person in an indecent manner by statements or verbal or comments or telephone calls or calls of any type or by chasing or sending messages or mails by any means; shall, on conviction be punishable with imprisonment for a term which may extend to three years or with fine not exceeding ten thousand rupees or with both.

Whoever makes, expresses, publishes or disseminates through any kind of mode of communication, any matter or subject for threatening, abusing, humiliating or defaming a person or class of persons, knowing it to be false and that causes injury to the mind, reputation or property of such person or class of persons or any other person in whom they have interest shall on conviction, be punished with imprisonment for a term which may extend to three years or with fine which may extend to ten thousand rupees or with both.

The Petitioners have submitted that Section 118A includes within its ambit mere 'discussion' or 'advocacy' which may be found as threatening, abusing, humiliating or defamatory by some persons, even though it need not necessarily reach the stage of 'incitement'.

"Thus, the restrictions and penal consequences imposed by Section 118A are not restricted to the 'incitement' stage, and are therefore contrary to the law laid down by the Hon'ble Supreme Court," they said.

It is contended that Section 118A suffers from inherent and incurable vagueness.

"Expressions such as "humiliating", "threatening" and "abusing" are not defined. Leaving such expressions to the subjective interpretation of individuals means that even diligent and conscientious citizens cannot know with certainty as to whether their acts of expressions could run afoul of Section 118A. This also results in a significant chilling effect on the exercise of the fundamental right to free speech and expression," a plea stated.

"It is also to be noted that under section 118 A of the Police Act, it is not necessary that the person, who had published or communicated a matter or a subject, should have the knowledge of about the likely hood of an injury to the mind, reputation or property of the other. Similarly, the provision also gives no importance to the criminal intention of the person to cause injury to the mind, repute and property of the other. The necessary corollary is that even a positive criticism or opinion of expression could be interpreted to be an offence under the provision."

It is further contended,

"Offences under Section 118A have been made cognizable. Therefore, the subjective personal views and unguided interpretation by individual police officials, who are not trained for exercising judicial functions, as to whether a particular act constitutes an offence under Section 118A or not would decide whether serious consequences such as arrest follow. The same is arbitrary and violative of Article 14."

The Petitioners have pointed out that none of the grounds for imposing reasonable restriction on free speech contained under Article 19 (2) of the Constitution are applicable to the restrictions attempted through Section 118A, just as was the case earlier with Section 66-A and Section 118 (d).

"It is settled that rights under Article 19 (1) (a) cannot be restricted on any ground other than those specified in Article 19 (2)," a plea said.

"The impugned penal section 118 A of Kerala Police Act lacks procedural and substantive safeguards to exterminate its misuse and it further usurp the power of the proposed victim to choose between prosecution and ignorance of such acts against the presumed victim, hence, shatters the foundation of Article 21 of the Constitution of India."

One of the plea states,

"By no stretch of imagination, it is possible to presume that the amendment is in the interest of public order. On the other hand, the provision deals with a private injury and to meet such situations penal provisions are available under the Indian Penal Code. It is to be noted that the protection under Article 19 (2) is not available for the redressal of individual grievances."

It is therefore urged that a declaration be made to the effect that Section 118A is illegal, arbitrary, contrary to legitimate expectations, and unconstitutional in so far as it violates Article 19 (1) (a), 14, and 21 of the Constitution of India.

K Surendran will be represented by Advocates P. Sreekumar.

Third Petitioner will be represented by Advocates C. Unnikrishnan and Johnson Gomez

The Kerala Government on Saturday notified the Kerala Police (Amendment) Ordinance, 2020 to incorporate Section 118A in the Kerala Police Act which makes intimidation, defamation, or insulting of any person an offence punishable with imprisonment of term upto Three years and/or upto Rs. 10,000/- fine.

Last month, the Kerala cabinet had made this recommendation to the Governor. It had stated in the press release that the ordinance is to ameliorate the concerns about the increasing incidents of crimes perpetrated through social media. The existing laws are found to be insufficient to deal with such crimes, especially after the Supreme Court struck down Section 66A of the Information Technology Act and Section 118(d) of Kerala Police Act, it had said.