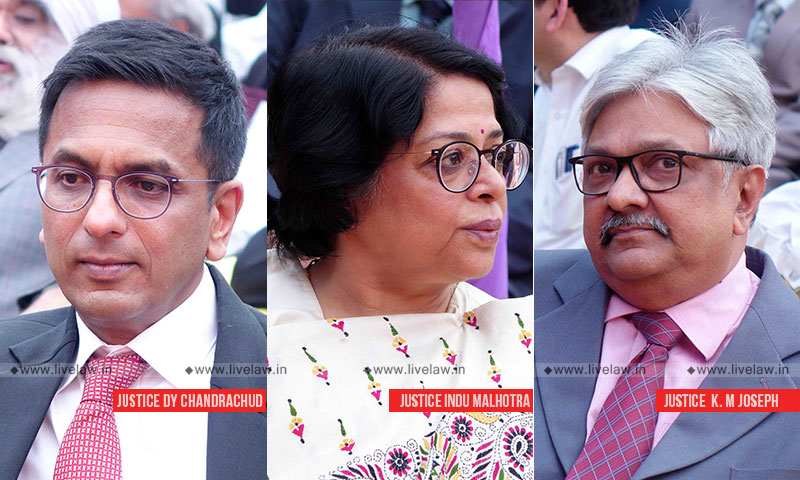 x
"We order and direct, pending further orders of the court, Sudarshan News TV is restrained from telecasting the show in continuation of the shows already telecasted either under the same or a different caption"

The Supreme Court on Tuesday restrained the Sudarshan TV News from telecasting the remaining episodes of the 'Bindas Bol' show about Muslims clearing the UPSC exam until further orders, after prima facie observing that the object of the show was to vilify Muslims. A bench of Justices DY Chandrachud, Indu Malhotra & KM Joseph was hearing a petition filed against the telecast of the...

The Supreme Court on Tuesday restrained the Sudarshan TV News from telecasting the remaining episodes of the 'Bindas Bol' show about Muslims clearing the UPSC exam until further orders, after prima facie observing that the object of the show was to vilify Muslims.

A bench of Justices DY Chandrachud, Indu Malhotra & KM Joseph was hearing a petition filed against the telecast of the show hosted by the channel's Chief Editor Mr. Suresh Chavhanke on the ground that it was communalizing the entry of Muslims into UPSC.

"At this stage, prima facie, it appears to the court that the object, intent and purpose of the program is to vilify the Muslim community with an insidious attempt to portray them as part of a conspiracy to infiltrate the civil services" , the Court observed in the order.

The top court noted in the order that there were factually incorrect statements made in the program regarding the upper age limit and number of attempts for Muslims in UPSC exams.

Senior Advocate Shyam Divan, appearing for the channel and Mr. Chavhanke, staunchly opposed the stay on the telecast by arguing that a prior restraint order will violate free speech.

Claiming that the show was part of "investigative journalism", Divan denied that there was any vilification of the Muslim community and asserted that the show was about a journalist unearthing details about foreign funding from sources that are not necessarily friendly with India.

When Divan said that it was a "freedom of speech issue", Justice Chandrachud disagreed.

"This is not a freedom of speech issue. When you say students of Jamia are part of a conspiracy to infiltrate civil services, that is not permissible. You cannot target one community and brand them a particular manner. This is an insidious attempt to malign a community", the judge said.

"As a Supreme Court of the nation, we cannot allow you to say that Muslims are infiltrating civil services. You cannot say that the journalist has absolute freedom doing this", the judge said.

J Chandrachud : When you say students of Jamia are part of a conspiracy to infiltrate civil services, that is not permissible. You cannot target one community and brand them a particular manner.

J Joseph quips in : That too by making factually incorrect statements.

J Chandrachud : As a Supreme Court of the nation we cannot allow you to say that Muslims are infiltrating civil services. You cannot say that the journalist has absolute freedom doing this.#SudarshanNews#SureshChavhanke

Advocate Sharukh Alam, appearing for another intervenor, submitted that the show had gone beyond the realm of speech, as it was soliciting active interaction from its viewers, who were airing bigoted views against the minority community.

Advocate Gautam Bhatia, appearing for a group of retired civil servants, submitted that the considerations against prior restraint are different while dealing with hate speech.

"Hate speech undermines the idea of free marketplace of ideas. The targeted community is deprived of the opportunity to respond or defend. The consideration on prior restraint is different in a case of hate speech", Bhatia submitted.

The Solicitor General submitted that the court should also consider the wider issues of the case, without confining it to only the electronic media.

When Justice Chandrachud asked the Solicitor General if anyone from the Ministry applied their mind to the four episodes of the show telecast from September 11 to 14, after the Ministry allowed its telecast on September 9, the SG replied that he will have to take instructions on that aspect.

Solicitor General says that there are statutory authorities to deal with the violations.

Justice Josehp says - 'the damage will be irreversible'.#SudarshanNews#SureshChavhanke

During the pre-lunch session, the bench made some strong oral remarks taking objection to the show telecast by Sudarshan TV News about the entry of Muslims into the All India Services after clearing the UPSC exams.

"This program was so insidious. Citizens from a particular community who go through the same examinations and get interviewed by the same panel. This also casts aspersions on the UPSC examination. How do we deal with these issues? Can this be tolerated?", Justice Chandrachud observed.

"...how rabid can it get? Targeting a community who are appearing for Civil services!", exclaimed Justice Chandrachud

The bench reflected upon the ramifications of how Electronic media can be used as a tool to threaten national security and stability and pondered upon the need for putting forth regulations.

"No freedom is absolute, not even journalistic freedom," said Justice KM Joseph

While Senior Advocate Anoop Chaudhari appeared for petitioner Firoz Iqbal Khan stating that the show is "blatantly communal", Senior Advocate Shyam Divan said that it was an investigative report concerned with national security.

Solicitor General Tushar Mehta pointed out that regulating media would be very difficult and that it could be disastrous for democracy. He also added that "rabid" things are often spoken from both ends, "I don't want to get into the right and left wing of it," he added.

Though on August 28, the top court had refused to pass a pre-broadcast injunction order to stop the telecast of the show, it issued notices to Union of India, Press Council of India, News Broadcasters Association as well as Sudarshan News.

While the court had stated that it has to desist from imposing a pre-broadcast injunction on the basis of an "unverified transcript of a 49 second clip", it was observed that the show had the expression of views derogatory to a particular community had a "divisive potential" had been highlighted during the hearing.

"The petition had thus raised significant issues bearing on the 'protection of constitutional rights'," the bench of Justices DY Chandrachud & KM Joseph had observed.

"Prima facie, the petition raises significant issues bearing on the protection of constitutional rights. Consistent with the fundamental right to free speech and expression, the Court will need to foster a considered a debate on the setting up of standards of self- regulation. Together with free speech, there are other constitutional values which need to be balanced and preserved including the fundamental right to equality and fair treatment for every segment of citizens", the SC said indicatied its intention to examine the issue in a larger perspective to lay down guidelines for broadcast.

An intervention application has also been filed by former civil servants seeking an authoritative pronouncement of 'hate speech'.

:The interpretative task before this Hon'ble Court therefore is to distinguish between speech that is merely offensive, indecorous or in bad taste [and therefore covered by Article 19(1)(a)] and hate speech that is rightly penalised by Articles 153A & B and the other provisions pointed out above," the plea reads.

On drawing a survey of Indian Constitutional provisions, precedent and international and comparative constitutional law, intervenors point out that the following propositions for consideration:

a. Offensive speech is distinct from hate speech;

b. The Constitutional protects offensive speech but does not protect hate speech. Penal provisional such as sections 153A & 153 B of the IPC must be interpreted in a manner that keeps the distinction between the two intact.

c. Offensive speech is simply speech that causes subjective feelings of offence or outrage and nothing more. Such speech may be ill-considered, unwise and improper but it is not illegal.

d. Hate speech goes beyond subjective feelings of offence and objectively has the effect of undermining constitutional constitutional equality, sending a message that a person or a group of people are not worthy of equal concern of respect and are not equal members of society, or are fair game for discrimination, hostility or violence.

e. Determining hate speech, therefore, requires a contextual enquiry by judicial and other State bodies, looking (a) the actual words used, (b) the meanings that they carry for their intended recipients, (c) any history of similar language, (d) and the likely consequences.

f. Hate speech can be direct (calls to violence and discrimination), but it can also be indirect, through, insinuation, and what is popularly known as dog-whistling. This, therefore, requires judicial bodies to be sensitive to the nuances and specific histories of the speech in question.

g. The distinction between offensive speech and hate may be parsed with the help of following examples:

ii) Mockery of religious beliefs or traditions may be offensive but it is not hate speech. Accusations of dual loyalties towards members of any faith - and suggestions of treachery by virtue of belonging to that faith - constitutes hate speech.

iii) Speech that has historically been inseparable from practices of oppression and subordination is hate speech (see eg. of this Hon'ble Court's examination of the use the word "chamar", under the Prevention of Atrocities Act, in Swwaran Singh Vs. State).

Earlier, the Delhi High Court had disposed of a petition filed by a group of students and alumni from the Jamia Milia Islamia by asking the Ministry of Information and Broadcasting to take a decision on the notice sent to the channel for alleged violation of the program code. The show's telecast was stayed till the final decision of the Ministry.

While ordering so, Justice Navin Chawla of the HC made a prima facie observation that the trailer of the show violated the program code.

On September 10, the Centre allowed the telecast of the show, after observing that the content should not violate the program code.

Following that, the episodes of the show were telecasted from September 11 to 14.