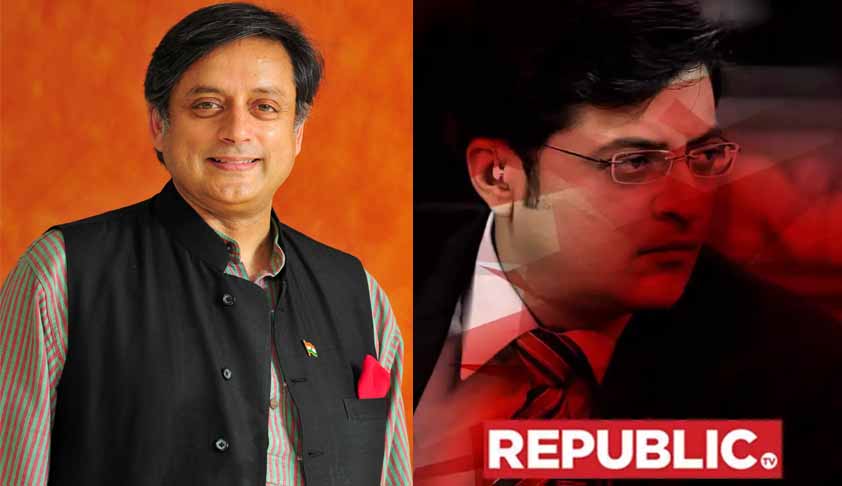 Delhi High Court has directed Arnab Goswami to exercise restraint and 'bring down the rhetoric', till the plea moved by Tharoor seeking injunction against allegedly defamatory broadcasting on Sunanda Pushkar case is disposed of. While issuing notice to Goswami to file a reply, the Single Bench of Justice Mukta Gupta highlighted that during the pendency of an investigation in a criminal...

Delhi High Court has directed Arnab Goswami to exercise restraint and 'bring down the rhetoric', till the plea moved by Tharoor seeking injunction against allegedly defamatory broadcasting on Sunanda Pushkar case is disposed of.

While issuing notice to Goswami to file a reply, the Single Bench of Justice Mukta Gupta highlighted that during the pendency of an investigation in a criminal case, media should refrain from running a parallel trial, or from calling someone guilty, or from making unsubstantiated claims.

'The sanctity of an investigation and evidence has to be understood and respected', the court said.

The order has come in a plea moved by Shashi Tharoor seeking interim injunction against Republic TV's Editor Arnab Goswami, restraining him from reporting any news or broadcasting any show related to the death of Mrs. Sunanda Pushkar till the present case is pending and also to restrain him from maligning and defaming the plaintiff in any manner.

Appearing for Tharoor, Senior Advocate Kapil Sibal argued that despite the chargesheet being filed in the Sunanda Pushkar case, where no case for murder is made out, Arnab Goswami is claiming in his shows that he has no doubts that Sunanda Pushkar was murdered.

Mr Sibal also pointed out that despite this court's last order dated December 01, 2017, whereby the defendant was directed to show restrain and refrain from conducting a media trial, Goswami has continued to broadcast defamatory content against Tharoor by claiming that he doesn't trust the investigation conducted by the Delhi Police.

' Can a man be abused like this in a public debate? How can he (Goswami) say that a murder was committed, when the chargesheet says otherwise? This can't continue like this till this court hears the matter', Mr Sibal submitted.

While taking into consideration the previous order of this court, the court rapped Arnab Goswami by noting that:

'When a case under abetment to suicide is made out in the charge-sheet, why are you still saying that murder has been committed. Were you there at the spot, are you an eye-witness? You must understand and respect the sanctity of criminal investigation and the various contours of it. Just because there's a bite mark, it doesn't amount to murder. Do you even know what constituted murder? You need to first understand what murder is before claiming that a murder took place.'

When Goswami's counsel, Ms Malvika Trivedi, argued that they have credible evidence from an AIIMS doctor that points towards Pushkar's death, the court questioned her line of argument by saying that:

'You are not in the field of collecting evidence, you have no access to the evidence, do you even know how evidence is collected and appreciated in a criminal trial? Can the media act as an appellate authority over what is stated in the chargesheet? There's no gagging of the media, but the law also prohibits media trial.'

The court further observed that when a chargesheet has been filed by an agency authorised to conduct investigation and a competent court, while taking cognisance of the same, has prima facie concluded that the case involves abetment to suicide and not murder, the statements made by the defendant insinuating murder being committed by Tharoor violates the directions of this court's previous order.

'Press has to exercise care and caution while reporting criminal matters that are under the investigation', the court said.

Therefore, the court directed Arnab Goswami to comply with this court's previous order and exercise restraint till the next date of hearing.

'This has to be strictly complied with, otherwise consequences will follow', the court said.