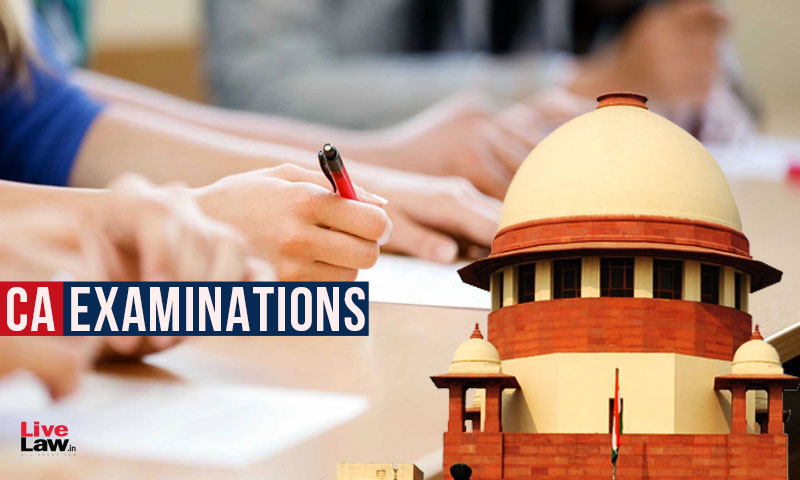 The Chartered Accountancy examinations will be postponed to November, informed the counsel for the Institute of Chartered Accountants of India (ICAI) to the Supreme Court today, in a plea challenging the "opt-out scheme", and seeking more centres for the CA exam.

The submission comes at the heels of a press release issued by ICAI wherein it has been stated the exams which were scheduled to commence from 29th July would now be merged with the November exams in wake of the COVID-19 pandemic.

"On a review of above developments and in order to ensure the interest of its students and their well-being, the Institute has decided to cancel May 2020 Examinations and merge the May 2020 attempt with November 2020 Examinations, with due carryover of all benefits already available to students including fee paid and exemptions" , the ICAI had stated.

A Bench comprising of Justices AM Khanwilkar, Dinesh Maheshwari and Sanjiv Khanna heard the matter. Previously, the Court had batted for the flexibility of the opt-out scheme, and had remarked that the situation due to the pandemic was not static, but dynamic.

The Bench had further informed Senior Advocate Ramji Srinivasan, appearing on behalf of ICAI, that the option to change one's centre for examination had to be kept open for all till the end and that being a professional body, ICAI had the responsibility to take care of its students.

The plea, filed on behalf of India Wide Parents Association by Advocate Alakh Alok Srivastava, challenged the June 15 notification issued by ICAI which stated that students could avail an "opt-out" option, as per which their attempt would be treated as cancelled and would be carried forward to the exams scheduled in November. The deadline for availing the same was June 30.

The Petitioner's contention was that the scheme was highly discriminatory and arbitrary as it did not take into consideration the students living in remote areas or containment zones who would be forced to opt out due to the restrictions imposed, as opposed to their counterparts living in urban areas. Therefore, the disadvantaged students would lose their "one precious attempt" of taking the examination.

The plea further prayed for free transportation and free accommodation for those students who were not in close proximity to their respective Examination Centres in order to protect them from "unnecessary harassment". It also sought for e-Admit Cards to be issued to captioned students, as e-passes for free movement of the students living in containment/red zones during the examinations. This was, however, rejected by the Court.