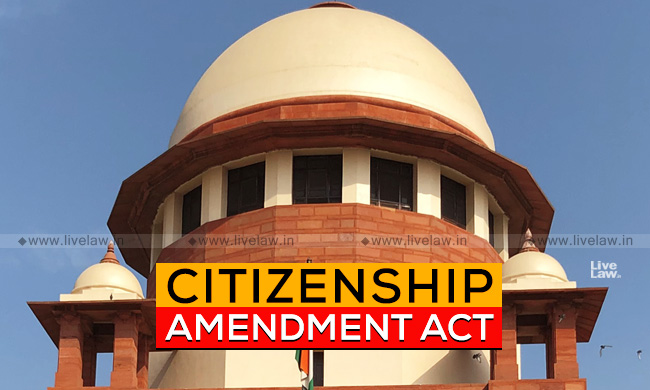 The Supreme Court on Wednesday granted four weeks time to the Central Government to respond to about 140 writ petitions which challenge the constitutional validity of the controversial Citizenship Amendment Act 2019.The bench comprising CJI SA Bobde, Justices Abdul Nazeer and Sanjiv Khanna has also issued notices on all petitions. The matter will be listed after five weeks.The Court will...

The Supreme Court on Wednesday granted four weeks time to the Central Government to respond to about 140 writ petitions which challenge the constitutional validity of the controversial Citizenship Amendment Act 2019.

The bench comprising CJI SA Bobde, Justices Abdul Nazeer and Sanjiv Khanna has also issued notices on all petitions. The matter will be listed after five weeks.

The Court will also consider if the matter requires to be referred to Constitution Bench.

Though some of the parties urged the Court to postpone the implementation of the process under the Act in the meantime, the bench did not pass any order granting such relief.

Chief Justice of India SA Bobde orally remarked that no ex-parte order can be passed as Centre had no notice on all petitions.

The bench also agreed to consider the petitions from Assam and Tripura separately, having regard to the special grounds urged in those cases.

Attorney General K K Venugopal sought for more time citing the need to file reply to 80 additional petitions, which were filed after the Court had earlier issued notice on 60 petitions on December 18.

The top court has also restrained the High Courts from dealing with the matter.

Senior Advocate Kapil Sibal sought for an order keeping in abeyance the NPR process for at least three months, pointing out that the NPR is scheduled to begin in April.

Senior Advocate Vikas Singh sought for an interim order citing that the Act violated Assam accord.

"In Assam there is a unique problem because of Bangladesh. Earlier the date was 1950, then it was extended to 1971. The extension is challenged before this court. It's referred to larger bench", Singh said.

The Attorney General urged the Court to treat Assam petitions separately. The AG also informed that the Assam NRC will not become operative until the final list is published by the Registrar General of India.

Disagreeing with this line of submission, the CJI observed that the effect is the same, even though the words are different.

Senior Adv A M Singhvi said that the Uttar Pradesh government had started the CAA process even without the Rules being framed.

"Without any rules being framed, 40 Lakh people have been marked doubtful. This has happened in 19 districts of UP. Their right to vote will be lost. Kindly stay the process. That's our prayer. This will prevent a lot of chaos and insecurity", he said.

AG submits that seeking the postponement of implementation of the Act is the same as seeking a stay of the same.
CJI agrees. Words are different, but the effect is the same, CJI says.#CitizenshipAmendmentAct #supremecourtofindia

On December 18, the SC had issued notice to centre on 60 petitions. Since the Act was yet to be notified then, the petitioners had not pressed for stay.

Later, the Act was brought into force by notification on January 10. Indian Union Muslim League, one of the petitioners, has filed an application seeking stay of this notification, and seeking clarification on whether NRC will be carried out nationwide.