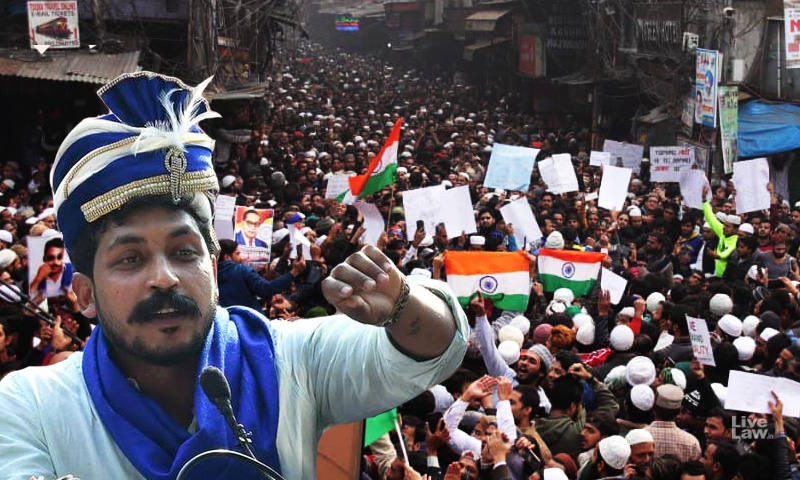 A Metropolitan Magistrate of Tis Hazari Courts, Delhi on Saturday rejected the bail application of Bhim Army Chief Chandra Shekhar Azad and remanded him to 14 days of judicial custody for allegedly provoking violence during anti-CAA protests in Daryagaj on Friday night.

"At this stage, this court is of the considered view that substantial grounds for granting bail to the accused are not made out.

Accordingly, the application of accused for grant of bail stands dismissed and accused be sent to judicial custody for 14 days and thereafter be produced before the concerned court or further orders", Duty MM Arjinder Kaur stated in a one-page order without mentioning express reasons.

The Magistrate had earlier remanded 15 other people arrested for alleged violence in Daryaganj yesterday during CAA protests to two days of judicial custody.

Bhim Army Chief Chandra Shekhar Azad had managed to slip out of the Delhi police's detention to organize a huge protest march in front of Jama Masjid in Delhi yesterday.

An FIR was registered against him for allegedly "instigating the crowd" and "proving violence" in Daryaganj area.

After several persons were detained by police yesterday night, Azad announced in Twitter that he was surrendering before police in exchange of release of the detainees.

"All those detained should be surrendered and then I'll surrender. Friends, continue fighting and stay united for the Constitution. Jai Bhim and Jai Constitution", he tweeted.

Earlier, police had stopped the press and media reporters from going inside the Court room for reporting, even though there was no order prohibiting reportage.

After much arguments, the police let the reporters inside. When the reporters complained to the Magistrate about the police behaviour, an order for "in-camera" proceeding was passed, barring press reportage of the hearing.

Advocate Mehmood Paracha, counsel for Azad, objected to the bar on media reporting.

The reporters raised a complaint before the District Judge Kamini Lau about the behavior of police and bar on media reporting. The District Judge orally agreed that it was the fundamental right of media to report the court proceedings, and termed the incident "absolutely unfortunate".

Order for remand to JC of Chandershakher Azad. Please note that no reasons are given for the proceedings to take place in-camera. It was passed on the spot after we went inside. This is absolutely reprehensible and a grave violation of law. @LiveLawIndia pic.twitter.com/OCaGCaEF2r