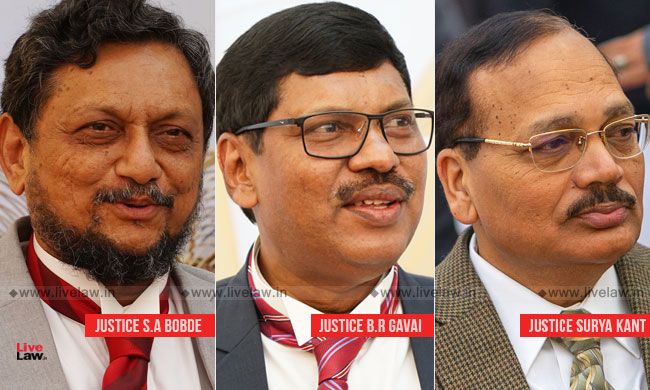 x
Karnataka HC had made a prima facie observation that violence was started by police.

The Supreme Court of India on Friday stayed the operation of an order passed by the Karnataka High Court granting bail to 22 people booked by the Mangalore police on allegations of violence and attack on police during anti-CAA protests in Mangaluru on December 19, 2019. A 3-judge bench comprising Chief Justice SA Bobde, Justice BR Gavai and Justice Surya Kant has issued notices to...

The Supreme Court of India on Friday stayed the operation of an order passed by the Karnataka High Court granting bail to 22 people booked by the Mangalore police on allegations of violence and attack on police during anti-CAA protests in Mangaluru on December 19, 2019.

A 3-judge bench comprising Chief Justice SA Bobde, Justice BR Gavai and Justice Surya Kant has issued notices to the alleged protestors in a SLP preferred by the state authorities. The order states,

In the meantime, there shall be an ad interim stay of operation of the impugned judgment and order passed by the High Court if the respondents-accused are still in custody."

The High Court had also directed registration of FIRs against police officials on the prima facie finding that they had used violence.

The state of Karnataka has impugned the high court's order holding them to have conducted "malafide" investigations.

"The records indicate that deliberate attempt has been made to trump-up evidence and to deprive the liberties of petitioners by fabricating evidence. It is not disputed that none of the petitioners have any criminal antecedents. The allegations levelled against the petitioners are not punishable with death or imprisonment for life. There is no direct evidence to connect the petitioners with the alleged offences. Investigation appears to be mala fide and partisan. In the said circumstances, in order to protect the rights and liberties of the petitioners, it is necessary to admit them to bail," the high court had said in its order dated February 17.

Further, commenting on the evidence placed on record the high court had said that it was in fact the police authorities that appeared to be pelting stones on the Petitioners and not vice versa.

"The material collected by the Investigating Agency does not contain any specific evidence as to the presence of any one of the petitioners at the spot; on the other hand, omnibus allegations are made against the Muslim crowd of 1500 – 2000, alleging that they were armed with weapons like stones, soda bottles and glass pieces. The photographs produced by learned SPP-I depict that hardly any member of the crowd were armed with weapons except one of them holding a bottle. In none of these photographs, police station or policemen are seen in the vicinity. On the other hand, photographs produced by the petitioners disclose that the policemen themselves were pelting stones on the crowd," the court remarked.

The court also considered the fact that 31 FIR's had been registered by the police against protesters but on complaints made by the family of the injured and those persons who died in police firing, no case were registered. It said

The Court further observed that the objective of opposing CAA could not be termed as an "unlawful object" within the meaning of Section 141 IPC.

In the words of the Court : "This assertion indicates that common object of the assembly was to oppose the implementation of CAA and NRC which by itself is not an "unlawful object" within the meaning of Section 141 of IPC."

Noting that in these circumstances "it would be travesty of justice to deny bail to the petitioners and sacrifice their liberties to the mercy of the District Administration and the police", the high court had directed the accused be released on bail of furnishing bond in a sum of Rs.1,00,000/- (Rupees One Lakh only) each with two sureties each for the like sum. They were also directed to remain present before the court as and when required and not get involved in similar offences; not leave the territorial jurisdiction of the court, without permission.