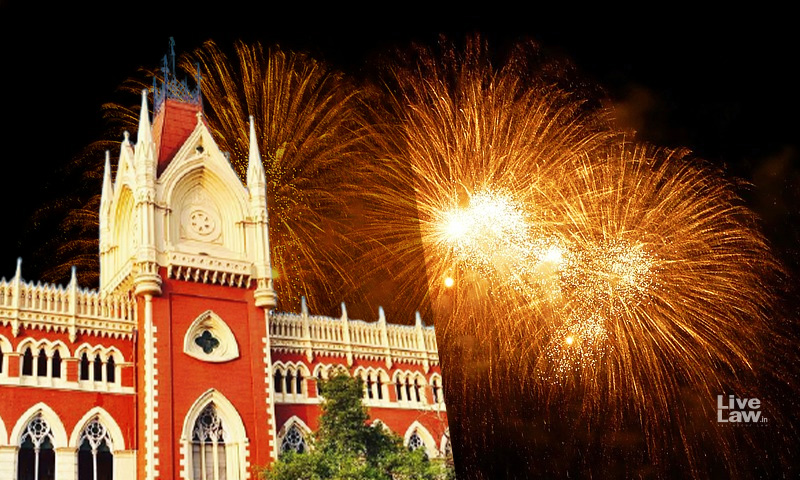 The Calcutta High Court on Wednesday disposed of a petition seeking directions for the proper implementation of prior Supreme Court orders on the regulation of firecrackers during the upcoming festivals. This comes in the wake of the Supreme Court setting aside the order of the Calcutta High Court which imposed a complete ban of use of firecrackers in the State of West Bengal.A Bench...

The Calcutta High Court on Wednesday disposed of a petition seeking directions for the proper implementation of prior Supreme Court orders on the regulation of firecrackers during the upcoming festivals. This comes in the wake of the Supreme Court setting aside the order of the Calcutta High Court which imposed a complete ban of use of firecrackers in the State of West Bengal.

The Bench further noted that the West Bengal Pollution Control Board appear to have specified timings for the use of firecrackers on festival days. It was further taken into consideration that the State had further issued directions for the use and manufacture of only 'green crackers' as per the Supreme Court order in Arjun Gopal v. Union of India.

"The importance and need for maintaining clean environment and clean air cannot be overstressed and is the responsibility of one and all. All citizens must follow and ensure that even the green firecrackers used do not cause discomfort to others. Suitable awareness campaigns must be undertaken by all stakeholders in this regard; through the available media. Self-imposed restrictions must be aggressively encouraged."

The petition had been moved  by the original petitioner i.e. environmental activist Roshni Ali on whose Public Interest Litigation (PIL) a division Bench comprising Justices Sabyasachi Bhattacharya and Aniruddha Roy had imposed a complete ban on the usage and sale of all kinds of firecrackers including green crackers throughout the State of West Bengal during the upcoming festivals this year. Thereafter, the Supreme Court had set aside the impugned order of the High Court and had instead allowed the use and manufacture of only 'green crackers' in the State of West Bengal. However, leave had been granted  to the petitioner to approach the High Court seeking further directions.

The Court on Wednesday however granted leave to the petitioner to file a fresh writ petition seeking further directions to ensure compliance.

"The petitioner may, therefore, institute a fresh proceeding which shall be dealt with after hearing of all stakeholders and after considering all material brought on record", the Court observed.

The Court further recorded in its order that the association of firecracker manufacturers represented by Advocate Srijib Chakraborty had taken an undertaking that no other firecrackers except green firecrackers would be sold by his client. He further apprised the Court that his clients have ensured that a QR code is available and displayed on each box of firecrackers manufactured. The QR code can be accessed through mobile phones and if the code is scanned, the license and certification of the NEERI and PESO would automatically appear in the screen, it was submitted further.

Advocate Rachit Lakhmani appearing for the petitioner urged the Bench to provide directions for the demarcation of zones for bursting of green firecrackers, away from hospitals and residential zones. He further apprised the Court that no such demarcated zones had been specified by the State of West Bengal or the West Bengal Pollution Control Board.

However, the Bench questioned the counsel as to how the State can be asked to comply with additional directions only 24 hours before the beginning of the festivities.

"You are coming one day before the festival, in most parts of the country the festival has already started. Are you expecting the State to comply with directions in less than 24 hours?", Justice Rajasekhar Mantha remarked.

Advocate General S.N Mookherjee submitted before the Bench that the State is 'aware of health hazards' and would put in every effort to ensure that there is only use and manufacture of green crackers. He further remarked, "If there has to be a fair opportunity to respond, I need to submit an affidavit."

On the other hand Advocate Srijib Chakraborty appearing for the association of firecracker manufacturers alleged that the instant petition had been filed only to garner publicity. He remarked before the Bench, "The petitioner is using social media, giving interviews where she is criticizing the Supreme Court order..this is absolutely deplorable." He further referred to a social media post of the petitioner wherein she had allegedly asked people to contact her for interviews and accordingly the counsel further remarked that he is unsure if she is taking remuneration for such interviews.

However, Justice Rajasekhar Mantha refused to entertain such allegations and thus remarked, "I am not getting into allegations about publicity." He further highlighted that it is important to strike a balance between the interests of citizens at large and the rights of the firecracker manufacturers.

A Division Bench comprising Justices Sabyasachi Bhattacharya and Aniruddha Roy of the Calcutta High Court had ordered a a complete ban on the usage and sale of all kinds of firecrackers including green crackers throughout the State of West Bengal during the upcoming festivities.

"The State should ensure that there is no use or display or bursting of firecrackers of any type at all during the oncoming Kali Puja, Diwali celebration as well as the following Chatt Puja, Jagadhatri Puja, Guru Nanak's Birthday and/or Christmas/New Year's Eve this year. For such purpose, only wax or oil-based diyas might be used", the High Court had ruled.

The High Court had further observed that there is no existing mechanism in place to ascertain whether only "green crackers" as permitted by the Supreme Court are being used and hence had proceeded to ban the use of such green crackers as well.

"It would be an impossible task for the police and/or law enforcement agencies to ascertain the veracity of the certificates of the crackers which are being used by the general public at the time of these festivals, irrespective of the classification under which they are sold. Leaving the window open for green crackers to be used, would positively entail abundant abuse of such window and there is no mechanism in place, as mentioned earlier, to screen such abuse at this juncture, when the festive season is on the anvil", the High Court had further opined.

While allowing the petitioner to file a plea before the High Court for further directions in this matter, the Supreme Court had set aside the complete ban on firecrackers and had instead allowed the use and manufacture of only 'green crackers' in the State of West Bengal.

"The State of West Bengal may explore the possibility of ensuring prevention of import of banned fire crackers or related items within the State of West Bengal at the entry point itself. That mechanism can be strengthened, if need be. Further, the State shall ensure strict supervision and verification at other places including where the trading of fire crackers occur as well as its use", the Supreme Court had specified in its order