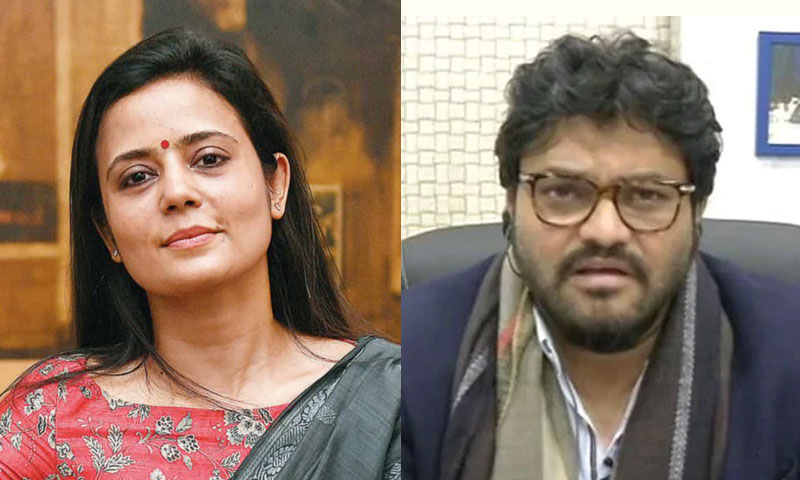 The Calcutta High Court on Wednesday (14th October) quashed the Criminal Proceedings launched against the Union Minister Babul Supriyo, based on a charge sheet filed by the State Police in an FIR lodged by Mahua Moitra (Presently Member of Parliament) alleging that objectionable remark was made against her by Babul Supriyo during a TV Debate.However, the Bench of Justice Bibek Chaudhuri...

The Calcutta High Court on Wednesday (14th October) quashed the Criminal Proceedings launched against the Union Minister Babul Supriyo, based on a charge sheet filed by the State Police in an FIR lodged by Mahua Moitra (Presently Member of Parliament) alleging that objectionable remark was made against her by Babul Supriyo during a TV Debate.

However, the Bench of Justice Bibek Chaudhuri opined that such deliberate utterance made by the petitioner was defamatory statement within the meaning of Section 499 of the Indian Penal Code and that Mahua Moitra was at liberty to take any action, according to law, before the appropriate forum.

In the wake of a political turmoil after the arrest of a leader of opposition party in Lok Sabha on 3rd January, 2017, a national debate was held and telecast by NDTV 24 X 7. The said debate was anchored by Ms. Barkha Dutta and was titled "The Buck Stops Here".

In the said national debate, the petitioner (Babul Supriyo), an elected MP and a part of the party in power at Centre and the opposite party No.2 (Mahua Moitra, now a Member of Parliament), then an elected member of Legislative Assembly of the State of West Bengal and National Spokesperson on behalf of her political party at the relevant point of time, took part in the discussion.

In the course of such debate, when the opposite party No.2 (Mahua Moitra) was opposing the petitioner's (Babul Supriyo) contention, Supriyo made a comment, "Mohua, are you on Mohua?"

According to Mahua Moitra, the said comment was derogatory alluding of the intoxicating liquor called Mohua which is drunk in many tribal areas in India.

The opposite party No.2 (Mahua Moitra) accordingly lodged an FIR against the petitioner before the officer-in-charge, Alipore P.S. Police registered Alipore P.S Case No.2 dated 4th January, 2017 under Section 509 of the Indian Penal Code and thus commenced the investigation of the case.

It is at this stage, the petitioner filed an application under Section 482 of the Code of Criminal Procedure praying for quashing of the charge-sheet before the HC. In March 2017, stay of further proceeding of the criminal case being CGR 62 of 2017 was granted for a limited period of time.

Then opposite party No.2 (Mahua Moitra) made an application praying for vacating the interim order. The said application was directed to be treated as an affidavit of opposition to the revision petition and directed to be disposed of along with the instant revision.

Finally, the aforesaid criminal revision was heard by the Court (culminating into the Present Judgment) on the basis of specific determination allotted to the Court by the Chief Justice of the Court in terms of the last order passed by the Hon'ble Supreme Court in Ashwini Kumar Upadhyay vs. Union of India.

It was argued that in order to constitute an offence under this Section (S. 509) the accused must have an intention to insult the modesty of a woman. The second part of the section deals with the purported act by the offender in furtherance to his mens-rea.

Further, it was submitted that in order to be an offence there must be criminality of action and secondly such action must be attributable to woman sex. Calling a lady intoxicant or under influence of liquor does not amount to insult her modesty.

The petitioner also took a stand that the said remark was an accidental slip. Even assuming that the petitioner made the remark suggesting the opposite party under influence of liquor, such a statement does not amount to insulting the the modesty of the petitioner as the essence of modesty is her sex.

Arguments Put Forth by Mahua Mitra's Counsel
It was also pointed out by the Counsel of Mahua Moitra, that the transcription of the programme showed that the anchor/moderator immediately interrupted the petitioner asking him not to make any personal comment.
Further, it was argued that if the comment made by the petitioner is viewed from the perspective of Ms. Barkha Dutta, it would prima facie suggest that the petitioner made such comment only to assassinate the personal character of a lady.

It was contended by the Counsel that any act which is capable of shocking the sense of decency of a woman amounts either to outraging modesty or insulting the modesty of a woman depending upon the specific act committed by the accused.

According to the Counsel, any form of all violence or discrimination against woman writ large to her feminity and when feminity is violated it is an insult on the modesty of a woman.

The Court was of the view that on a careful reading of the judicial pronouncement by the Hon'ble Supreme Court in various cases, it could be found that the test for ascertaining if modesty has been outraging or not lies on the determination of the question as to whether the act by the accused is capable of shocking the sense of decency of the woman.

The Court observed that the sense of decency of the woman, if considered to explain the term "modesty" within the meaning of Section 354 is her sex.

"The penal code recognizes assault, criminal force or insult of woman's modesty as offence. When the essence of modesty has been described as the sex of a woman, by the Hon'ble Supreme Court, by no stretch of the imagination the definition can be widened to include an assault or insult on the qualities of goodness, sensitivity, gentleness, empathy etc of a woman." (emphasis supplied)

Consequently, the Court came to the conclusion that the allegation in the first information report and other materials, accompanying the FIR do not disclose any cognizable offence under Section 509 of the IPC.

Therefore, the Court held that the charge-sheet being No.27 dated 08.03.2017 filed under Section 509 of the Indian Penal Code was liable to be quashed.

"Deliberate Utterance Made By The Petitioner Was Defamatory Statement"

Before parting with the Case, the Court noted that both the petitioner and the opposite party No.2 were at the relevant point of time elected representatives of the people. They are the mouthpieces of the general mass of the country.

The Court remarked that the petitioner (Babul Supriyo) was not only an elected Member of Parliament, but also a Minister of State of the Central Government.

"It is expected from a representative of the people that he must be courteous in his behaviour, dignified in his manners and cautious on his words spoken by him. It is undisputed that in course of a political debate, the petitioner asked the opposite party No.2 as to whether she was intoxicated. The opposite party No.2 was at the relevant point of time an elected member of West Bengal Legislative Assembly and National Spokesperson of a rival political party. She was not only a public figure, but is a woman." (emphasis supplied)

"It is the Constitutional mandate under Fundamental Rights, Fundamental Duties and Directive Principles of state policy that dignity of woman must be protected and freedom of speech and expression enshrined in Article 19(1)(a) is subject to reasonable restrictions and one of such restrictions is penal provision against defamation. The petitioner, it is already stated, at the relevant point of time was a Member of Parliament. He took solemn oath to bear faith and allegiance to the constitution. By making such defamatory statement to a woman , the petitioner prima facie, not only humiliated dignity and honour of a woman, but also violated his constitutional oath." (emphasis supplied)

"If doubt is raised in the mind of people from the utterances made by the petitioner that the at the relevant point of time she was drunken and intoxicated, this would, of course, an act of imputation intending to harm the reputation of the opposite party No.2 and such deliberate utterance made by the petitioner was defamatory statement within the meaning of Section 499 of the Indian Penal Code." (emphasis supplied)

"Cognizance of an offence punishable under Section 500 of the IPC cannot be taken in the absence of the complaint in writing specifically filed by the complainant before the Magistrate, on the basis of police report only which is barred under Section 199 of the Code of Criminal procedure."

In the instant case, the Court noted, the complainant did not make any complaint before the jurisdictional magistrate.

For the reasons aforesaid, the Court held that the charge-sheet does not disclose commission of any offence under Section 509 of the Indian Penal Code against the accused.

Lastly, the instant criminal revision under Section 482 of the Code of Criminal Procedure was allowed on contest, however without cost.

The connected applications were also disposed of. However, the Court said that the opposite party No 2 (Mahua Moitra) was at liberty to take any action, according to law, if available to her against the petitioner before the appropriate forum and in such case, the learned Court below will take appropriate steps without being influenced or swayed over by any observation made by this Court in this judgment.

The respondent, Mitra, was represented by Mr. Sabyasachi Banerjee and Ms. Minal Palana.