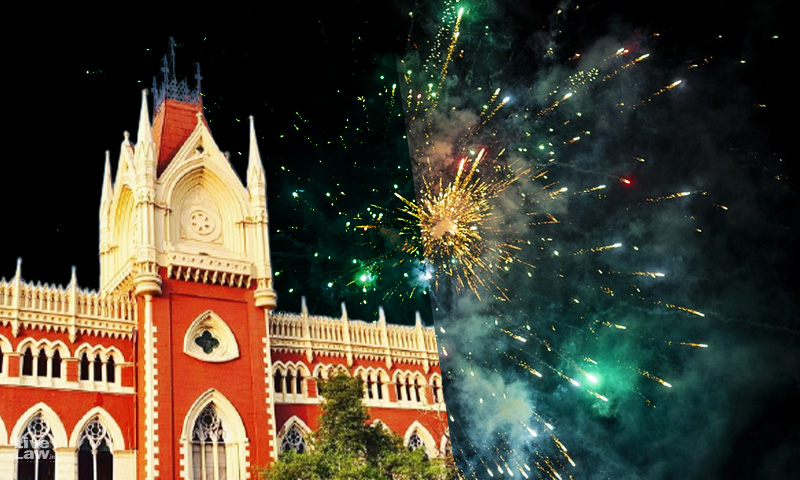 The Calcutta High Court on Friday ordered a complete ban on the usage and sale of all kinds of firecrackers including green crackers throughout the State of West Bengal during the upcoming Diwali/Kali Puja festivities. Such an order on complete ban of firecrackers shall persist for all remaining festivities this year including Chhath Puja, Guru Nanak Jayanti, Christmas and New...

The Calcutta High Court on Friday ordered a complete ban on the usage and sale of all kinds of firecrackers including green crackers throughout the State of West Bengal during the upcoming Diwali/Kali Puja festivities. Such an order on complete ban of firecrackers shall persist for all remaining festivities this year including Chhath Puja, Guru Nanak Jayanti, Christmas and New Year's celebrations.

"The State should ensure that there is no use or display or bursting of firecrackers of any type at all during the oncoming Kali Puja, Diwali celebration as well as the following Chatt Puja, Jagadhatri Puja, Guru Nanak's Birthday and/or Christmas/New Year's Eve this year. For such purpose, only wax or oil-based diyas might be used"

The Court was adjudicating upon a Public Interest Litigation (PIL) petition moved by environmental activist Roshni Ali seeking a ban on the sale and use of fire crackers during the upcoming festivities in order to safeguard people's right to clean, healthy and breathable air, particularly in times of the vicious Covid-19 pandemic.

During the course of the hearing, the counsel appearing on behalf of the petitioner pointed out to the Court that a Division Bench of the High Court last year in the case of Anasua Bhattacharya v. State of West Bengal & Ors had passed a similar order prohibiting the use or display or bursting of firecrackers during all festivities.

Advocate General SN Mookerjee further highlighted that it is important to protect the fundamental right to life of citizens but maintained that the State had a 'neutral' stand in this respect vis-à-vis the rights of the firecracker manufacturers.

The Court was further apprised by the Advocate General that the Supreme Court vide prior decisions had allowed the use of green crackers. He also pointed out to the Court that the West Bengal Pollution Control Board on Wednesday had released a notification allowing the use of only 'green crackers' for a limited time of 2 hours during Diwali. This was done keeping in mind prior orders of the National Green Tribunal (NGT) dated November 9 and December 1, 2020, it was further submitted.

On the other hand, advocate Srijib Chakraborty appearing for an association of firecracker manufacturers argued before the Court that the Supreme Court in November 2020 had set aside an order of the Telangana High Court imposing a complete ban on sale and use of firecrackers and had further permitted the use of green crackers. He thus prayed before the Court to permit the use of only 'green crackers' as authorized by the certifying authority NEERI (National Environmental Engineering Research Institute).

To this, the Bench remarked,

"Is it possible to test firecrackers? Can you put a mechanism in place before 4th November? We can't kill people by following judgments blindly".

The Bench further acknowledged that manufacturers of green crackers who have invested huge amount of resources would be left in the lurch at the eleventh hour. However, it recorded in its order that keeping in view the larger interest of the citizens of the State, the smaller interest of the firecracker manufacturers and all concerned with such business might be overlooked

Taking note of the difficulties in ascertaining whether only "green crackers" as permitted by the Supreme Court are being used, the Court observed,

"Keeping in view the practical realities, we find nothing to establish that there is any mechanism in place at present to ascertain whether the crackers being sold or burst/lighted are only green crackers, complying with the norms as set in place by the relevant certifying Body."

The Court also observed that it would be an impossible task by police and law enforcement bodies to inspect firecrackers and the classification under which they are sold.

"It would be an impossible task for the police and/or law enforcement agencies to ascertain the veracity of the certificates of the crackers which are being used by the general public at the time of these festivals, irrespective of the classification under which they are sold. Leaving the window open for green crackers to be used, would positively entail abundant abuse of such window and there is no mechanism in place, as mentioned earlier, to screen such abuse at this juncture, when the festive season is on the anvil", the Court opined.

The Bench further observed that allowing the use of firecrackers even in places having a 'moderate' Air Quality Index (AQI) can cause severe difficulties for people suffering from respiratory problems.

"Keeping in mind the present pandemic situation, which is getting marginally worse by the day and in view of the fact that even moderate Air Quality Index (AQI) can cause severe difficulties for people suffering from respiratory problems and long exposure thereof may also affect otherwise healthy people, we are not convinced that firecrackers of any form, either green or of any other category, ought to be permitted to be used during the coming festive season", the order stated further.

The Court further clarified that the expression "firecrackers", shall cover all types of sparklers as well as other like material, whether or not the bursting/burning thereof involves any sound or light being generated.

Accordingly, the Court disposed of the plea by directing the police authorities to take appropriate measures in this regard at the earliest.

• Appropriate measures may be taken by the police authorities in such regard at the earliest.

The petitioner has been represented by Advocates Rachit Lakhmani and Arindam Paul.