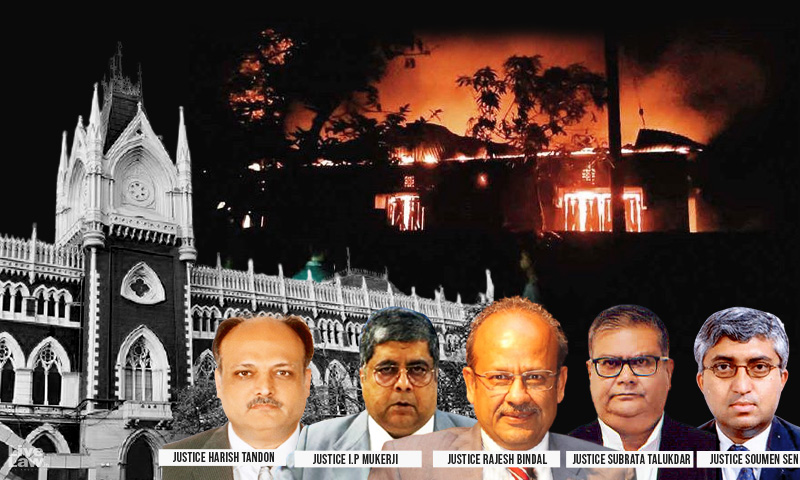 The Calcutta High Court on Thursday handed over to the Central Bureau of Investigation(CBI) the investigation of the cases related to murder, rape and crime against women which happened in the State of West Bengal in May 2021 soon after the declaration of the assembly election results. The CBI investigation will be monitored by the High Court. Acting Chief Justice Rajesh Bindal...

The Calcutta High Court on Thursday handed over to the Central Bureau of Investigation(CBI) the investigation of the cases related to murder, rape and crime against women which  happened in the State of West Bengal in May 2021 soon after the declaration of the assembly election results. The CBI investigation will be monitored by the High Court. Acting Chief Justice Rajesh Bindal delivered the lead judgment whereas Justices I.P Mukerji, Harish Tandon and Soumen Sen delivered separate but concurring judgments.

"The Committee, NHRC, any other Commission or Authority and the State shall immediately hand over entire record of the cases entrusted to the CBI for investigation. It is made clear that it shall be the Court monitored investigation. Any obstruction in the course of investigation by anyone shall be viewed seriously", the Court observed.

As regards other criminal cases related to post-poll violence, the Court directed that they be investigated by a Special Investigation Team under the monitoring of the Court. IPS officers, Suman Bala Sahoo, Soumen Mitra and Ranbir Kumar of the West Bengal cadre will be members of the SIT.

The working of SIT will be monitored by a retired judge of Supreme Court, who will be mentioned later in a separate order to be passed.

The Court has directed the State of West Bengal to immediately process the compensation for the victims of the post-poll violence. The Court also rejected the allegations of bias raised by the State Government against the National Human Rights Commission, a team of which had submitted a fact-finding report to the Court as per its directions.

"The allegation of bias against the Committee is not material because this court has considered not only the report of the Committee but other materials as well and arguments of learned Counsel based thereon", Justice I.P Mukerji observed in his judgment.

The CBI and the SIT have been asked to submit status reports to the Court within six weeks. The matter will be again considered by a division bench on October 24.

The Court has directed the handing over of the autopsy report of Abhijeet Sarkar, a BJP worker who got killed in the post-poll violence and other sealed cover documents to the CBI.

A 5-judge bench comprising Acting Chief Justice Rajesh Bindal, Justice IP Mukerji, Justice Harish Tandon, Justice Soumen Sen and Justice Subrata Talukdar pronounced the verdict in a batch of petitions alleging State inaction against the alleged acts of violence unleashed by members of ruling Trinamool Congress party on those who supported the BJP during the election.

Acting Chief Justice Bindal, in his lead judgment, observed that the fact finding report of the NHRC committee has thrown light on the police inaction, and hence the matter required independent investigation.

"The allegations of the petitioners are that in registration of cases and investigation thereof of the police is slow as main allegations are against the supporters and workers of the  ruling party. In number of cases FIRs were registered only after the committee pointed out those. There are some FIRs registered against the supporters/workers of political parties not in power. These are claimed by them as false cross cases. Even they will not be able to allege bias against the State if investigation of their cases is also held by an independent agency or monitored by SIT. It should and will inspire confidence of the people in rule of law. The allegation is of police inaction. Report submitted by the Committee throws some light on this and the police having not properly responded to all the issues raised and trying to downplay the same, it certainly needs investigation by an independent agency. Even comparison of data pertaining to crime during previous corresponding period will also not come to the rescue of the State as the pattern of the crime can change and the period thereof. Further there are definite and proved allegations that complaints filed by the victims of post poll violence were not registered. Such types of incidents, even if isolated are not good for healthy democracy", Justice Bindal's judgment stated.

Recommendations made by NHRC committee beyond its jurisdiction

Justice I.P Mukerji noted in his judgment that the NHRC committee was under an obligation to observe the procedure prescribed under the Protection of Human Rights Act, 1993 before making any recommendations.

"Even if we assume that the Committee was making a recommendation under the said Act, the view expressed by it was without compliance with that procedure. Therefore the part of the report expressing opinion, making recommendations etc. is non-est in the eye of law", Justice Mukerji opined.

Similarly, Justice Sen in his concurring judgment also set aside the recommendations made by the NHRC committee, by observing that the committee's mandate was only to do fact-finding.

The Calcutta High Court on August 3 had reserved judgment on a batch of petitions pertaining to the alleged post-poll violence in the State of West Bengal. The Union had submitted before the Court that it was willing to extend the services of central investigating agencies such as the CBI (Central Bureau of Investigation) and the NIA (National Investigation Agency) pursuant to the Court's orders.

Following the results of the 2021 Assembly elections, a batch of petitions had been filed before the High Court seeking investigation into allegations of post poll violence. The pleas also sought the Court's direction to deploy the services of central investigating agencies to probe into the allegations.

On May 4, 2021 the National Human Rights Commission (NHRC) had taken suo moto cognisance of the matter and had requested the DIG (Investigation) to constitute a team of officers of the Investigation Division of the Commission to conduct an on the spot fact finding investigation.

On May 31, the High court had ordered the formation of a three-member committee to ensure that persons allegedly displaced by post poll violence in the State are able to safely return to their houses. The three member committee comprised of Member Secretary of West Bengal Legal Services Authority (WBSLSA), the West Bengal Human Rights Commission and the NHRC. Subsequently, the WBSLSA submitted a report to the Court compiling all the complaints received by them from the victims.

On July 18, the High Court had directed the NHRC to constitute a committee that will examine complaints filed by persons who were allegedly displaced during the post-poll violence in West Bengal. NHRC Chairperson Justice Arun Mishra then constituted a seven member committee to inquire into complaints regarding the post poll violence. The NHRC in its report had termed the post poll violence as a 'retributive violence by supporters of the ruling party against supporters of the main opposition party'.

Based on the NHRC's interim report, the High Court had observed on July 2 that the 2021 Assembly elections in the state were prima facie followed by violent episodes, leading to several deaths, rampant sexual exploitation of women and children, etc.

During the hearings, Senior Advocate Abhishek Manu Singhvi appearing on behalf of the Director-General of Police, (DGP) West Bengal had submitted before the Court that the constitution of the NHRC committee was inherently biased and politically motivated. The senior counsel made a reference to the committee member Atif Rasheed who had previously contested elections on behalf of the BJP.