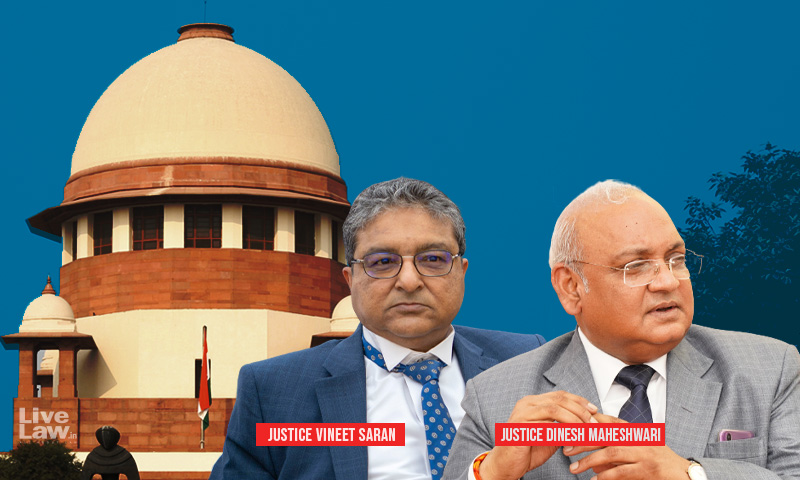 x
"Collective efforts are needed during times of crisis, but good intent itself does not give everybody a right to enter into a different arena”, the Court orally said.

"The limited question we want to ask is that how far can Constitutional Courts go in such matters", said the Supreme Court on Wednesday in Uttar Pradesh Government's challenge to the Allahabad High Court order of 17 May wherein a slew of directions had been given to tackle the second wave of the COVID-19 pandemic. A Bench comprising Justices Vineet Saran and Dinesh Maheshwari...

"The limited question we want to ask is that how far can Constitutional Courts go in such matters", said the Supreme Court on Wednesday in Uttar Pradesh Government's challenge to the Allahabad High Court order of 17 May wherein a slew of directions had been given to tackle the second wave of the COVID-19 pandemic.

A Bench comprising Justices Vineet Saran and Dinesh Maheshwari presided over the matter and directed the Amicus Curiae Senior Advocate Nidhesh Gupta to address them on the boundaries within which Courts can function.

The matter will now be heard on 12th August.

In today's hearing, Solicitor-General Tushar Mehta informed the Bench that the matter was being heard by the Acting Chief Justice of the Allahabad High Court. Earlier, he had made a request before the Supreme Court to pass a direction that cases of public importance should be dealt with by the Chief Justice's bench of the High Court. The Supreme Court had refused to pass such a direction, saying it was the prerogative of the Chief Justice to assign the roster; however, the top court observed that it is desirable that such matters are handled by CJ's bench.

Taking note of the fact that the case is now being handled by the Chief Justice's bench, the Supreme Court bench asked the SG if he wanted to proceed with the matter. The SG replied that he was seeking to set aside the impugned order as well.

To this, the Bench responded that a new Order of 21 May eclipsed the impugned High Court order and there was no requirement to set aside the same. Justice Saran further directed the SG -

"We want your assistance in whatever subsequent orders have been passed by the High Court. If you can have them procured and compiled and place them on record. We have not stayed the matter before the High Court, and as they are taking it up, we don't want to get into it", said the Court.

Both Justice Saran and Justice Maheshwari then went on discuss whether the High Court could pass directions or give suggestions which mimicked Executive decisions.

"Even the suggestions which are amounting to Executive decisions, we have to ask whether the High Court can enter that arena. However, laudable the objectives are, when there are demarcations, we have to respect that. How far should the "Ram Bharose" comment be justified? How many beds are to have oxygen, how many ambulances are to be there, we don't want to comment on that", remarked the Bench.

They further stated that suggestions regarding purchase of vaccines from international markets etc. were not practical and it was an arena which could not be transgressed by the High Court.

"If any area is earmarked for the Executive – these are times of crisis where everybody has to take note of what is required to be done by whom and where. You may be having 100s of suggestions, but it cannot result in a Court order. We are Constitutional Courts. Of course, there cannot be a straitjacket, but there are boundaries as well. How far can we go? We want you to assist us on this issue, Mr. Gupta", informed the Top Court.

The Amicus submitted to the Court that an Affidavit had been filed by the Uttar Pradesh Government wherein they had stated that they would ensure the availability of certain facilities, and that the Courts should have the ability to ensure the implementation of the same.

The Bench agreed and stated, "The limited question we want to ask is that how far can Constitutional Courts go in such matters. Collective efforts are needed during times of crisis, but good intent itself does not give everybody a right to enter into a different arena".

Matter will now be heard on 12th August.

On May 23, the Supreme Court stayed the directions issued by the Allahabad High Court on May 17 for upgrading the medical facilities in the state of Uttar Pradesh on a war-scale footing in wake of the second wave of COVID-19 pandemic.

A Vacation Bench comprising Justices Vineet Saran and BR Gavai had stayed the order after hearing the submissions made by Solicitor-General for India Tushar Mehta on behalf of the State of Uttar Pradesh. Senior Advocate Nidhesh Gupta was appointed the amicus-curiae.

The Solicitor General told the Supreme Court that the High Court's directions, though well-meaning, were difficult to implement.

Further, the High Court had directed that all nursing homes should have oxygen bed facilities and that that nursing homes having beds above the specified number should have oxygen production plants and certain percentage ventilators. Further, the High Court had directed that the medical college hospitals in the states should be upgraded to the level of Sanjay Gandhi Postgraduate Institute within a period of four months.

Also, the High Court made observations such as the health care system in towns and villages of Uttar Pradesh was like "ram bharose". Such observations, which according to the Solicitor General, will have a demoralizing effect on the health care professionals in the state.

The SG also informed the top court that the High Court had made several observations relating to vacccine production and had suggested that the Government should take the vaccine manufacturing formula from companies to enable more companies to produce the same.

The SG submitted that the High Courts ought to refrain from passing directions in policy matters, especially when they can have trans-state and even trans-national ramifications.

A Division Bench of Justices Siddhartha Varma and Ajit Kumar of the High Court had passed the directions in the suo moto case "In-Re Inhuman Condition At Quarantine Centres And For Providing Better Treatment To Corona Positive".

"At the outset, we may appreciate the efforts of the High Court of Allahabad as well as various other High Courts for taking up the matter for management of COVID. However, while dealing with such matters and the concerns the Courts may have for patients and general public and the anxiety of Courts to give utmost relief to those suffering, sometimes, unwittingly the Courts overstep and pass certain orders that are not capable of being implemented".

The top court said that while passing directions, the Court should consider if they are capable of being executed.

"Acknowledging the effort of the HC for looking into the matter in depth while passing the order, we state that the Court should avoid passing orders if they are impossible to be implemented. The doctrine of impossibility is equally applicable to the Courts", the Bench had said.

While staying the High Court's directions, the Supreme Court said that the state of UP should treat them as advisory guidelines and should take all possible endeavours to implement them.