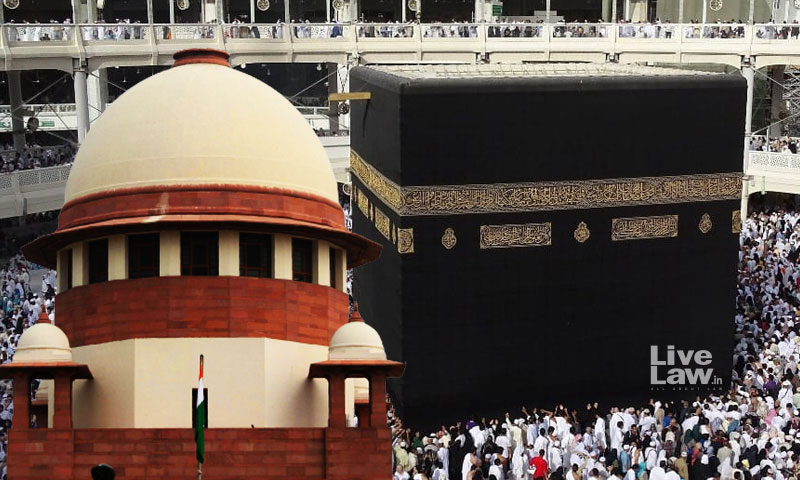 The Supreme Court on Thursday commenced hearing on a string of petitions filed by various private tour operators seeking exemption from the Goods and Services Tax for the Haj and Umrah services offered by them to pilgrims travelling to Saudi Arabia.

The tour operators are challenging the levy of GST on Hajis who avail themselves of services offered by registered private tour operators on the grounds that no tax law can be applicable on extra territorial activities per Article 245 of the Constitution. It is their argument that the services consumed outside India cannot be sujbected to GST.
They also argued that the levy is discriminatory as it exempts certain hajis who undertake the pilgrimage through the Haj Committee of India. A GST levy of 5% (with input tax credit) is applicable on air travel by pilgrims who utilise the services of non-scheduled/charter operations for religious pilgrimage facilitated by the Centre under bilateral arrangements. However, if the services of a specified organisation in respect of a religious pilgrimage is facilitated by the External Affairs Ministry under bilateral arrangement, the rate would be nil.
The other limb of the argument is that the services offered to Hajis such as flight journey, accommodation etc, are eligible for the exemption granted to religious activities.
The bench of Justices A. M. Khanwilkar, A. S. Oka and C. T. Ravikumar was informed by ASG N. Venkataraman that the issue of extraterritoriality in taxation has been heard for over a month by another 3-judge bench of the Supreme Court and the judgment is reserved. Justice Khanwilkar then put to Senior Advocate Arvind Datar, for the petitioners, that if the arguments are confined to the aspect of exemption on grounds of religious ceremony, the bench may address it immediately, but as regards extraterritoriality, the bench would await the decision of the coordinate bench. Mr. Datar agreed but stated that he would not be able to wrap up his submissions on Thursday itself. The bench then adjourned the matter to April 26.
In the earlier part of the hearing on Thursday, Advocate Kotla Harshavardhan, being led by Mr. Datar, advanced that being a religious ceremony, the services provided as part of the pilgrimage are entitled to exemption, "The services I am required to provide are in the Kingdom of Saudi Arabia, in respect of which I am seeking exemption. Neither I nor the Hajis have any freedom, it has to be performed in a particular manner. And if it is not performed in a particular manner, then there are penal consequences and then it is not considered as completion of Haj in the manner in which it is done"
Mr. Harshavardhan: "Your lordships asked if we are to rely on exemption, why should accommodation in Saudi Arabia fall within it? In this case, it operates as part of the exemption as that is also for conduct of a religious ceremony. Unlike other situations, in this case, stay and accommodation in the manner in which it is provided has to be availed in order to perform Haj. Therefore, it will fall within the bracket of the exemption. Hajis don't have an option other than the accommodation provided by the government and through the policy. Haj group organisers are facilitating that and charging for it. That is strictly bound by the rules of the religion and the policy of the government of India"
Bench: "So whatever service you provide, transport, stay etc, is part of religious ceremony. That is what your argument is. And this is rendered in Saudi Arabia?"

Mr. Harshavardhan sought to indicate the response of the Centre on an RTI application, where, he insisted, the UOI admits that Haj and Umrah privileges are part of religious ceremony.

Justice Khanwilkar: "In all writ petitions, RTI is relied on. This is always misleading. Depending on what question is posed, based on that the answer is given. That has been our broad experience till now. RTI is not an admission of the government. The concerned authority which is required to do business of taxation should depose on affidavit that this is what we state and only then can we accept it as admission"

The advocate then took the bench through the 'Haj guide'- "Everything is indicated. It says 'stay overnight in Mina'. It is part of the ceremony, that I have to stay is also indicated. The second day description is also given..."

Justice Khanwilkar: "If you are right on the first point that all this is happening outside of India and therefore this regime is not applicable, then all this is not required to be elaborated. What you are being charged in India is in respect of what service is offered from India and culminating in India- This is what the question is and this is what the department is looking at. We have to establish that even if it is happening outside India, the originating place is this and the culminating destination is also in India, and therefore it is all chargeable here in India. Going there is itself a process, starting from here, originating from here"

Mr. Harshavardhan: "Today, the challenge is not to the booking of airline tickets or taxation on that. It is also not for the money changing services. There also the taxes are being paid. The limited challenge is restricted to the services provided in Saudi Arabia. If your lordships say it is a taxable service, then I am relying on exemption"

Justice Khanwilkar: "then we have to say that no doubt it is services and facilities, but it is all religious ceremony, all that is happening outside India. And once that is said, then Exemption notification applies..."

Justice Khanwilkar: "You say anything done outside India is outside the scope of this taxation dispensation. Once that argument is accepted, the rest need not be gone into. If it is not accepted, then the second point is that you make adjustments on that. That adjustment argument cannot be opposed by the other side until they point out some specific provision as to why adjustment cannot be given. The other side says because services are organised from here, charges will be leviable here. That is their plea. We have to draw that line. Services may have been organised from here but ultimately some activities are done outside of India for which payment is made there at the local level- that cannot be taxable here in India. That is your point. But which activities out of India for which you have to pay? If it is outside of India, then the whole thing is not covered under this Act because this law cannot travel beyond the boundaries"

Justice Khanwilkar: "Airline tickets and money changing is there. What remains of that bill is the actual spending done there for making arrangements by you and the actual amount spent by the parties there. Those matters are outside India's territory. That is how the line will have to be drawn by the authority concerned"

ASG: "If they are going to say everything is extraterritorial, then 60% of our tax economy will go for a toss...We have abandoned the performance-based rule. Earlier, the law was that when something is performed partly in India and partly outside India, it is deemed to have been performed outside India. Now, it is reverse...the point in that matter before the other bench is the same"

Justice Khanwilkar: "The best course is to await the decision"

Mr. Datar: "We may say that Kailash Mansarovar is exempt. Why don't they exempt us? It is a religious ceremony. They say it is a commercial activity"

The bench will continue hearing on April 26.