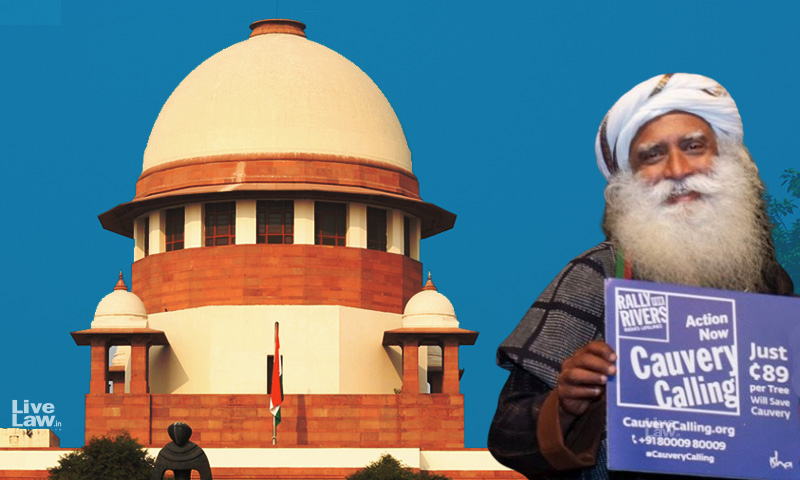 Sadhguru's 'Isha Outreach', which is managing the Cauvery Calling project, on Wednesday informed the Karnataka High Court that it has moved the Supreme Court challenging an order passed by the High court on October 15, 2020.

As per the said order, the High Court had converted the PIL against 'Cauvery Calling' - a drive launched by Sadhguru to plant tree saplings along Cauvery river-into a suo moto case, after removing the petitioner AV Amarnathan on account of his objectionable conduct.

During the hearing today, the counsel for Isha Outreach sought adjournment for four weeks saying that the order dated October 15, 2020 has been challenged by filing a special leave petition in the Supreme Court. The organization is challenging the High Court's decision to proceed with the case even after the removal of the PIL petitioner.

Based on the submission of Isha Outreach's counsel, a division bench of Chief Justice Abhay S Oka and Justice Suraj Govindraj observed in the order :

"Respondent 3 (Isha Outreach) has filed a memo stating that order dated 15 October 2020, has been challenged yesterday by filing Special Leave Petition. Hence for the time being we grant a time of one month to respondent 3 to move the apex court. List the petition on May 25."
The PIL was filed seeking directions to stop Isha Foundation from collecting money from public for the 'Cauvery Calling' project. On October 15, 2020, the High Court took exception to the act of the petitioner sending a legal notice to the Discovery Channel asking it to stop the telecast of a show about the project. The High Court did not appreciate the fact that the petitioner misrepresented that the telecast will amount to contempt of court.
On March 8, the court had orally asked the state government if it will enquire whether any money was collected by Isha Foundation or Isha Outreach from the public by projecting that 'Cauvery Calling' as a project of the State government.

The observation was made after the government clarified that 'Cauvery Calling' was not a project of the Government of Karnataka and that the Government was not funding or providing any aid to it.

The clarification was issued by the state government after the court passed repeated directions to make its stand very clear on the question whether the State Government has any connection with the project of Cauvery Calling and whether the second and third respondents (Isha Foundation/Isha Outreach) are involved in the project of the State Government.

Isha Outreach had submitted a memo to the court stating that it has published on its website a statement saying that the Cauvery Calling project is an initiative of Isha Outreach.