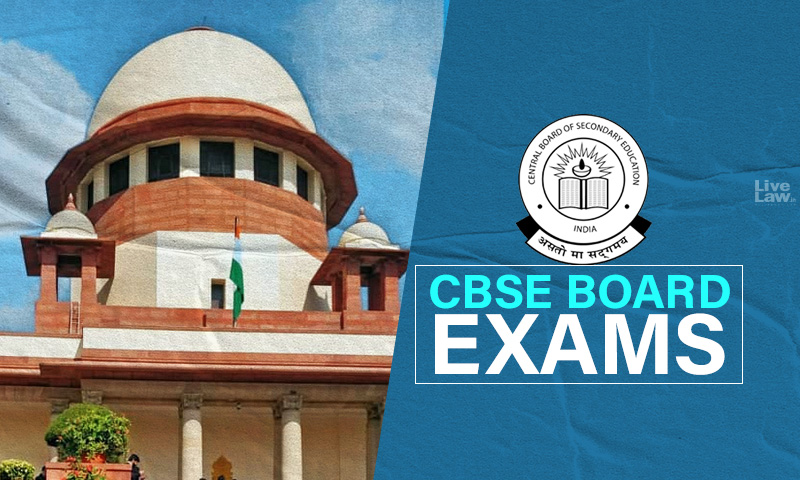 In a writ petition filed by Class XII-pass out students aggrieved by school's alleged failure to implement the evaluation procedure as prescribed in the Evaluation Policy, the Supreme Court on Monday directed the school authorities and students to appear before the Regional Officer, CBSE to demonstrate the disparity in the marking.The bench of Justices AM Khanwilkar and CT Ravikumar also...

In a writ petition filed by Class XII-pass out students aggrieved by school's alleged failure to implement the evaluation procedure as prescribed in the Evaluation Policy, the Supreme Court on Monday directed the school authorities and students to appear before the Regional Officer, CBSE to demonstrate the disparity in the marking.

The bench of Justices AM Khanwilkar and CT Ravikumar also directed the Regional Officer CBSE to give audience to the petitioners and the school representatives.

Directions were also issued to the Regional Officer, CBSE to submit a report with regards to the correctness of the grievance before March 28, 2022.

The bench in its order said,

"Grievance of the petitioner essentially is about deviation from the policy statement occurring in clause 10(a) & (i) in particular, said clauses read thus. This grievance has been made on the basis of records available with the school concerning respective subjects and candidates concerned. We direct the school authorities as well as petitioners who are interested in demonstrating this disparity in the marking done by the school result committee to appear before the regional officer, CBSE having office at Chandigarh on March 21, 2022 at 11:00 AM. Regional Officer to ensure that he makes himself available on the day and time to give audience to petitioner & school representative to remain present with relevant record to justify the marks. Regional Officer shall then submit a report to this court with regard to the correctness of the grievance before March 28, 2022. List on 1st April, 2022."

Earlier, the Top Court had directed the School Result Committee to decide the student's representation within 2 weeks.

When the matter was called for hearing, Advocate Mamta Sharma appearing for the petitioners submitted that the petitioner's grievance was that marks have not been allocated in compliance with the evaluation policy.

"They have talked about range distribution but have allotted marks contrary to clause 10 of the same. Case of the petitioner is that marks have not been allocated in compliance with the evaluation policy. Marks that have been awarded were to be awarded in terms of the policy. There were 2 specific riders- marks to be allocated in fair & transparent manner & marks were to be moderated for class 11 & 12th but they have moderated the marks in contravention to 10(i) of their policy," submitted Advocate Mamta Sharma.

During the course of hearing, Advocate Mamta Sharma to substantiate her contention also referred to clause 10(a) and 10(i) of the Evaluation Policy.

Clause 10(a) of the evaluation policy said, "The historical performance of the school in terms of the best overall performance in the previous 3 years Board Examination will be taken as reference year for moderating the marks assessed by the school for 2020-21."

Clause 10(i) of the evaluation policy said, "To facilitate this and make it easy for schools, CBSE will prepare an online system in which schools can enter the marks and check whether the marks allocated are in conformity with the historical distribution. In case there is a mis match, then the Result Committee shall have to revise the marks, as the case may be, as per a consistent and objective criterion which should also be documented in the rationale document."

She further contended that the moderation was done by the software randomly.

"As school has stated that as per policy they had to allocate the marks in different range. They have reproduced a chart in which they stated that 224 students were falling within the range but only some students could be placed. In the same range of group, what they have done- out of 11 petitioners there are 8 who fall within the same range group. But despite the same, the marks of the students were decreased and no explanation was provided. Out of these 11 petitioners - there are 8 who are in the range of 75% to 94%," counsel submitted.

"Software applies logic & you will have to explain the logic as to why it has not been made applicable in your case," the bench remarked at this juncture while asking Advocate Rupesh Kumar as to who was the incharge of the Committee.

"Mr Kumar, you take the responsibility. You look into the matter, appoint some higher official & give us a report about it," bench further added.

On Advocate Rupesh Kumar appearing for CBSE's submission that the parties could approach the Regional Officer, CBSE having his officer at Chandigarh the bench directed the school representatives and students to approach the officer concerned.

Details Of The Plea

It was stated in the petition that student's marks have not been calculated on the basis of Evaluation Policy dated June 17, 2021 rather marks have been deducted arbitrarily by the School.

It was also contended that petitioner students have been awarded much lesser marks causing great prejudice to the students.

In this backdrop, the petitioners had sought for issuance of directions to the respondents to provide a detailed scorecard to the students and the documents maintained by the School stating reasons of decreasing/ increasing marks of the students prepared in terms of the evaluation policy.

Relief was also sought for issuance of directions to CBSE to set up a Committee investigating the complete records of the school to find out the actual reason behind a huge variance of marks awarded to the students and decide their dispute in respect of calculation of marks by way of reasoned order.

The petition was drawn by Advocate Mamta Sharma through Advocate Ravi Prakash.