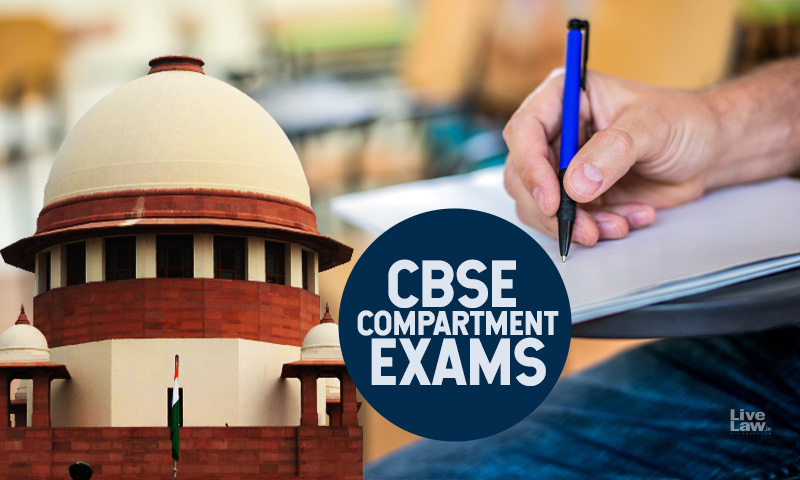 x
'They are only seeking to retain their original results", the Court observed.

The Supreme Court on Monday asked the Central Board of Secondary Education(CBSE) to reconsider its policy of treating the marks in the improvement exams of Class 12 as final over the marks tabulated as per the Standard Formula.A bench comprising Justices AM Khanwilkar and CT Ravikumar was considering a writ petition filed by Class 12 students, who sought directions to retain their...

The Supreme Court on Monday asked the Central Board of Secondary Education(CBSE) to reconsider its policy of treating the marks in the improvement exams of Class 12 as final over the marks tabulated as per the Standard Formula.

A bench comprising Justices AM Khanwilkar and CT Ravikumar was considering a writ petition filed by Class 12 students, who sought directions to retain their original results over the results of their improvement exams, in which they were declared either 'Fail' or scored less marks.

The bench pointed out that the students are only seeking for retention of their original mark results and the admissions taken by them will be affected if the lesser marks scored by them in the improvement exam is considered.

The CBSE, in its counter-affidavit, told the bench that it has made a partial revision of its policy to the extent of allowing students who got 'Fail' in improvement exam to retain their 'Pass' result which they got as per the Standard Formula.

"...Respondent No.1, as an academic authority, has come to a decision in the larger interest of the students and keeping in view the career of students who had been declared as "Pass" as per the modalities of Tabulation policy but declared "Fail" or "RT" in the result declared on 29.09.2021 for Class XII for the subsequent examination conducted in the month of August-September 2021, that they will be given consideration to retain their previous results so that their academic career is not affected. In addition to the above sympathetic approach taken by the answering Respondent, another reason is that for the Academic Session 2021-22 the pattern as well as the syllabus is completely different from the previous session and therefore, failed students will not fit into the pattern of current examination", the CBSE stated in its counter-affidavit.

However, the bench urged the CBSE to rethink its policy with respect to the students who got lesser marks in the improvement exam as well.

"You either take instructions or we'll pass directions. Have you spoken to your officers as to what the students will have to face? Suppose students appeared in an improvement exam and what would happen for their arrangement? Persuade your officers, Mr Kumar. They are not asking for anything else but their original results will also have some effect right. Please take instructions....The improvisation students have ended up with less marks or even failed. Their admission will be affected. This is not a permanent arrangement but a one-time policy. Please consider that too", Justice Khanwilkar asked the CBSE's counsel Rupesh Kumar.

When the matter was called for hearing, Advocate Mamta Sharma appearing for the petitioner submitted that CBSE in their counter affidavit had granted partial relief with regards to the directions sought in the writ.

She submitted that CBSE had agreed to retain the original results of the students who had been declared "PASS" but were declared as FAIL or RT in the subsequent examination conducted in the month of August September.

It was also her contention CBSE had refused to grant any relief to the students who were awarded very few marks in the improvement exam.

In the counter-affidavit, the CBSE stated that it had specifically expressed in the notification that the "marks scored in the later examination will be considered final". Since the students took the improvement test fully aware of this condition, they can't now raise a grievance, the CBSE contended. The Board further said that the policy was taken in view of the peculiar situation of this year, where the written exams were cancelled due to COVID, and the marks were assessed based the 30:30:40 assessment formula, which was approved by the Supreme Court.

It was argued in the petition that the students were under an apprehension that their original result declared by the CBSE in which they were declared pass will be cancelled, on the basis of clause 28 of the Evaluation Policy by CBSE dated June 17, 2021.

As per the said clause, "Students who are not satisfied with the assessment, done based on the policy will be given an opportunity to appear in examinations to be conducted by the board when conditions are conducive for holding the examinations. As per this policy, marks scored in later examinations will be considered final."

In this regard, the students had contended that the clause was contradictory to CBSE's own other circulars and to the responses given to students for the following reasons:

The petitioners had contended that CBSE was duty bound to follow its following bylaws and could not forfeit the right of the students having declared already passed by applying the formula of 30:30:40 propounded by Hon'ble Supreme Court of India Mamta Sharma V. CBSE & Ors.

The petition has been drawn by Advocate Mamta Sharma and filed by Advocate on Record Ravi Prakash.