CBSE Exams : Supreme Court Asks Comptroller Of Examinations To Examine Students' Grievances About Differences In Marks Allotted By School & Board 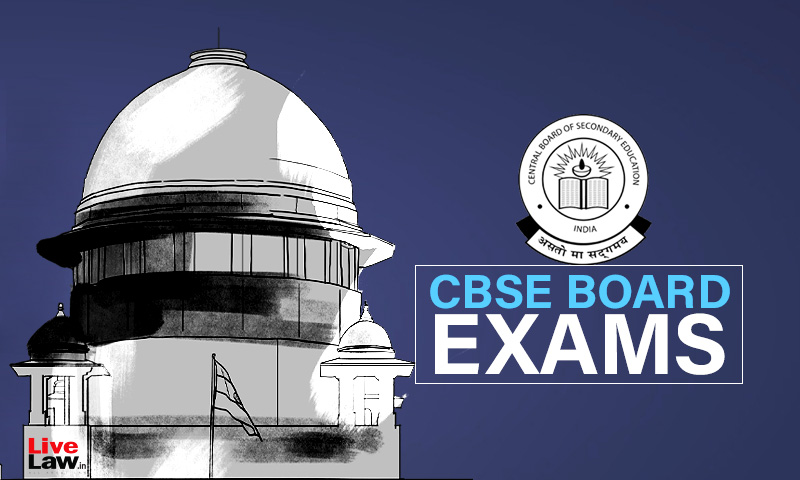 In a case of difference in marks calculated by CBSE and the respondent School, the Supreme Court has directed the Comptroller of Examinations to reconsider grievances of the students and take appropriate decision.

The dispute in the case is with regard to marks allotted to petitioner students as per 30:30:40 formula for class X, XI, XII respectively for the 2021 exams, where the Board had resorted to alternative assessment in lieu of written exams due to.

A bench comprising Justice AM Khanwilkar and Justice JB Pardiwala has asked the Comptroller of Examination to take assistance of technical team to explain the flow of algorithm and software which provides for different deduction of different marks student-wise.

The bench has clarified that it hasn't expressed any opinion on the contentious issue.

The bench has directed all the aspects to be considered by the Comptroller of Examinations on its own merits and pass an appropriate speaking order within two weeks. The matter will be taken up next on 12th July 2022.

The grievance of the present petitioner students is that according to their school, the school allotted them particular marks, whereas the CBSE results that are uploaded reveal, that the marks uploaded are much less than the marks given by the school.

The marks of the Students in class X, XI, XII have been calculated as per 30:30:40 formula.

The petition has shared one instance, where the marks of one of the students as per the formula are 106, 88 and 234 for class X, XI and XII respectively, making the total marks 428. Now, while the respondent school had forwarded total 428 marks, to CBSE to be given to the student on the basis of the formula, the actual marks given by the CBSE are 364. Therefore , there is a difference of 64 marks in what is given by the Respondent School and CBSE.

The School Committee has argued that it meticulously followed each and every instruction as mentioned in the CBSE portal and did not have any power or option to moderate or assign marks on its own.

Further, it has been argued that the entire process was done precisely as per the CBSE instructions and now, CBSE is putting the onus of its wrongs on the School, who had no independent role to play in either assigning marks or moderating the marks.

According to the School Committee, the CBSE portal was an all inclusive portal and it worked as per the algorithm/program as designed by CBSE, and if the moderation process was wrong or inaccurate, the responsibility and onus of that lies with the CBSE and not the school.

The school argued that it cannot be ruled out that the CBSE is trying to cover up this inaccuracy and now it has used the opportunity to put the entire blame on the school.