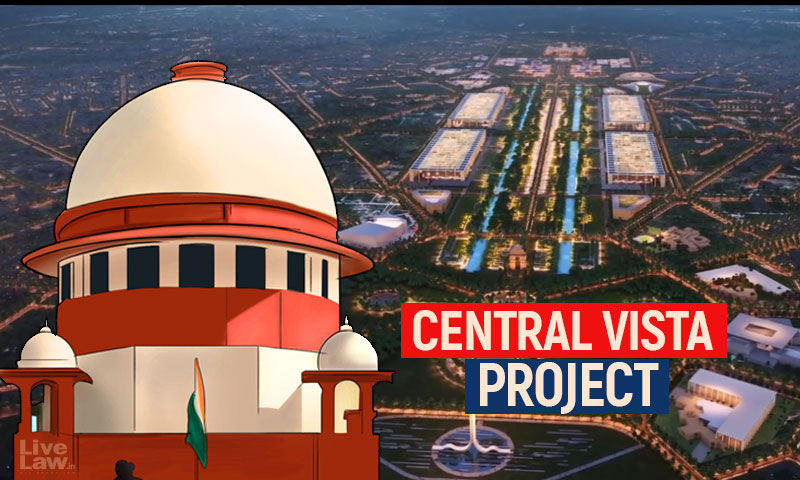 The petitioner has argued that Judicial scrutiny is required since the subject Plot 1 takes over open spaces of a Children's Recreational Park and Bus Terminal.

A Bench comprising Justice AM Khanwilkar and Justice CT Ravikumar adjourned the matter after being informed that a reply affidavit has been filed online by the Union of India.

Since the Bench hadn't received the affidavit, it directed a Copy of the reply to be kept in paper book.

During the hearing, Advocate Shiv Shikhil Suri appeared for the petitioner. Advocate Kanu Agrawal appearing for the Union of India informed the Court that the Union has circulated a letter and had already filed a reply.

The present petition has been filed by a new Delhi resident challenging the notification issued by Government on 28th October 2020 notifying change in land use by proposing modifications in Zonal Development Plan of Zone 'D' for the Plot Number 1 in Central Vista Area of Lutyens, New Delhi.

The petitioner, a new Delhi resident has moved this writ Petition in view of Supreme Court's order dated 28th August 2020 passed in his special leave petition whereby it had directed that when the final decision regarding the change in land use in respect of Plot 1 will be taken, it will be open for petitioner to challenge the same on permissible grounds.

In January this year, the Supreme Court had upheld by 2:1 majority the Central Government's plan for construction of the Central Vista project and the government's proposal to construct a new Parliament in Lutyen's Delhi.

The petitioner has argued that the Union of India has 'malafidely' issued the notification notifying the change in land which will deprive Delhi residents and citizens of India of a vast chunk of highly treasured open and green space in the Central Vista area available for social and recreational activity.

According to the petitioner the impugned notification is violative of Article 21 of the Constitution of India, and the notification stands against their fight to enjoyment of a wholesome life.

The petitioner has stated that since the subject Plot 1 takes over open spaces of a Children's Recreational Park and Bus Terminal for public transport, heightened Judicial scrutiny is required to cut through the well disguised illegalities and infirmities to reach the violations of statutory laws.

Creeping Acquisition Of Open Spaces Of Central Vista By Respondents

The Respondents failed to file any cogent reason for the creeping acquisition of the open spaces of Central Vista earlier and now the blatant aggrandisement.

The petitioner has argued that depriving children of the city of park, and play areas has been frowned upon by Courts and legal interventions have prevented public authorities from taking over such open spaces.

Further, Supreme Court's order in case of Bangalore Medical Trust vs BS Muddappa has been cited where it was laid down that protection of open places for recreation, play grounds for children are matters of great public concern and of vital interest to be taken care of in a development scheme.

The petitioner has argued that the impugned notification ignores the first and most basic criteria of Section 11-A (1) of the Delhi Development Act of 1957 and has done just the opposite by proceeding to effect substantive change in the land usage of Plot 1 when specifically restrained by the Section.

"The Authority may make any modifications to the master plan or the zonal development plan as it thinks fit, being modifications which, in its opinion, do not effect important alterations in the character of the plan and which do not relate to the extent of land-uses or the standards of population density."