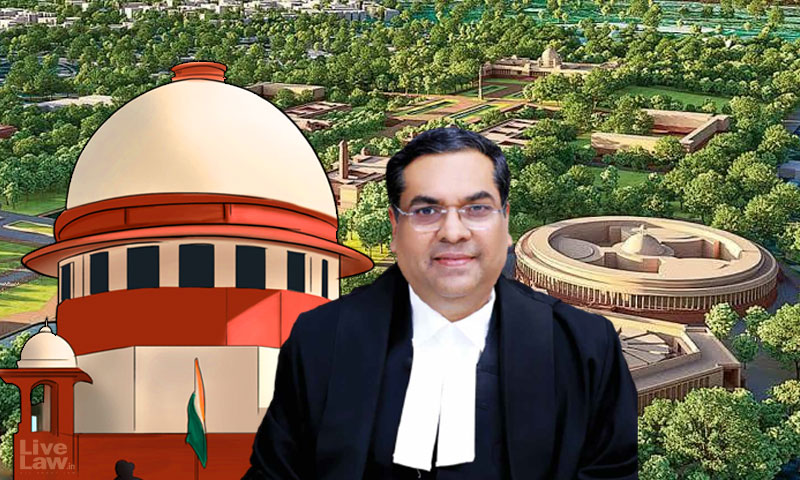 Justice Sanjeev Khanna, in his separate opinion in Central Vista Project case, expressed his dissent on the aspects of public participation on interpretation of the statutory provisions, failure to take prior approval of the Heritage Conservation Committee and the order passed by the Expert Appraisal Committee.The judge, however, agreed with the majority on the aspects of Notice inviting...

Justice Sanjeev Khanna, in his separate opinion in Central Vista Project case, expressed his dissent on the aspects of public participation on interpretation of the statutory provisions, failure to take prior approval of the Heritage Conservation Committee and the order passed by the Expert Appraisal Committee.

The judge, however, agreed with the majority on the aspects of Notice inviting Bid, award of consultancy and the order of the Urban Arts Commission, as a standalone and independent order.

The judge observed that the core issue in the present case is whether or not the respondents have performed their duty to consult the public, followed the prescribed procedure and the authority competent had acted to modify/amend, in terms of the Development Act and the Development Rules.

One of the main contentions raised by the petitioners in this case was that, a project of this nature must involve the common public as they are the real stakeholders of national heritage and must be consulted at every stage of the project including prior to drawing outline of the project, releasing consultancy tender, modifying the Master Plan and finalisation of the design and making changes therein.

While addressing this argument, the judge referred to Sections 7 to 11-A of the Development Act and observed that the same has detailed procedure for preparation of a Master Plan and the Zonal Development Plan(s) including direction that the Authority shall prepare a draft and make a copy available for inspection to general public and invite objections and suggestions from any person.

" Public participation to be fruitful and constructive is not to be a mechanical exercise or formality, it must comply with the least and basic requirements. Thus, mere uploading of the gazette notification giving the present and the proposed land use with plot numbers was not sufficient compliance, but rather an exercise violating the express as well as implied stipulations, that is, necessity and requirement to make adequate and intelligible disclosure. This condition also flows from the common law general duty of procedural fairness. Doctrine of procedural legitimate expectation as explained below would be attracted. Intelligible and adequate disclosure of information in the context of the Development Act and the Development Rules means and refers to the degree to which information should be available to public to enable them to have an informed voice in the deliberative decision making legislative exercise before a final decision is taken on the proposals. In the present matter this lapse and failure was acknowledged and accepted by the BoEH, which had recommended disclosure and furnishing of details. Intelligible and adequate disclosure was critical given the nature of the proposals which would affect the iconic and historical Central Vista.

The citizenry clearly had the right to know intelligible details explaining the proposal to participate and express themselves, give suggestions and submit objections. The proposed changes, unlike policy decisions, would be largely irreversible. Physical construction or demolition once done, cannot be undone or corrected for future by repeal, amendment or modification as in case of most policies or even enactments. They have far more permanent consequences. It  was therefore necessary for the respondents to inform and put in public domain the redevelopment plan, layouts, etc. with justification and explanatory memorandum relating to the need and necessity, with studies and reports. Of particular importance is whether by the changes, the access of the common people to the green and other areas in the Central Vista would be curtailed/restricted and the visual and integrity impact, and proposed change in use of the iconic and heritage buildings"

Given the importance of Central Vista, failure of govt to follow "intelligible and adequate disclosure" cannot be ignored

"... given the nature and importance the statutory provisions which emphasise on fair participation of the public in the deliberations, and the importance and significance of Central Vista, we do not think it would be appropriate and correct to ignore failure on the part of the respondents to ascribe to the principle of intelligible and adequate disclosureto fulfil the requirement of public participation.Right to make objections and suggestions in the true sense, would include right to intelligible and adequate information regardingthe proposal.Formative and constructive participation forms the very fulcrum of the legislative scheme prescribed by the Development Act and the Development Rules. Every effort must be made to effectuate and actualise the participatory rights to the maximum extent, rather than read them down as mere irregularit yor dilute them as unnecessary or not mandated"

Justice Khanna, in this regard, noted that Technical Committee of the Authority in its meeting held on 5 th December,2019 while examining the proposal had, inter alia, stated that steps would be taken to seek approval of the Heritage Conservation Committee. "However Heritage Conservation Committee was never moved to secure approval/permission. No approval/permission has been taken.", the judge added.

"Central Government could not have notified the modified the land use changes, without following the procedure and without prior approval/permission from the Heritage Conservation Committee. Further, the local body is expressly interdicted from issuing building permits in respect of the listed heritage buildings/precincts. The local body i.e. NDMC should have approached the Heritage Conservation Committee for clarification/confirmation and proceed on their advice.",

While rejecting the contention that the construction of the new Parliament being on a vacant plot adjacent to the existing Parliament building does not require approval/no objection from the Heritage Conservation Committee, Justice Khanna observed:

On the issue of Environmental Clearance granted by Expert Appraisal Committee, the judge observed that there is a lack of discussion, reasons or even the conclusion or finding on the aspect of slicing or inclusion. Justice Khanna observed:

"Proceedings before the EAC are not adversarial in nature. EAC acts both as a fair investigator and an independent objective adjudicator when deciding whether or not to grant environmental clearance. There must be application of mind which is reflected when reasons justifying the conclusion are recorded. Mere reproduction of the contesting stands is not sufficient. On the contrary it would reflect mechanical grant without application of mind. Further, it is not for the court/appellate forum to assume what weighed, whether the conclusion relies on material which is relevant, irrelevant or partly relevant, or whether the decision is partly based on surmises and conjectures and partly on evidence"

Rejecting the contention that the relevant clause of the EIA Notification of 2006 does not require giving of reasons when environment clearance is granted, the judge said:

"The National Green Tribunal in Gau Raxa Hitraxak Manch v. Union of India has rightly observed that the use of the comma at the end of the first part of the sentence, prefixing the words 'terms and conditions' and also suffixing the words 'terms and conditions' with the words 'together with reasons for the same' need to be read in conjunction. In this case it was held, and we respectfully agree, that the apprising body, which includes EAC as well as the Ministry, has to make categorical recommendations to the regulatory authority either for grant of clearance or rejection, together with reasons for the same. Further, the orders passed by the EAC are appealable before the National Green Tribunal. Appellate forum would not be able to decipher and adjudicate unless reasons are set out and stated in the order under challenge. The whole purpose of outsourcing the task to EAC, comprised of experts and specialists, is to have a proper evaluation on the basis of some objective criteria. EAC is a body that has to apply its collective mind and not to record conclusions. It must justify and give basis for its conclusions."

The judge said he would quash the final notification of modification/change of the land use dated 28th March 2020 in respect of the 6 plots in the Central Vista and issue the following directives:

While concluding, the judge observed thus:

Central Vista and Parliament House is an heritage and belongs to the Nation and the people. Their primary grievance is lack of information and details. They submit that experts and specialists can provide acceptable solutions to conserve and make historical buildings functional, as it has happened elsewhere. The issues raised by the petitioners along with the stand of the respondents have to be taken into consideration by the statutory authorities in terms of and as per the statutory mandate. Ultimately, the issue has to be decided as per law after ascertain details by professional experts. Our interference does not reflect on merits of the stands, but is on account of procedural illegalities and failure to abide the statutory provisions and mandate.