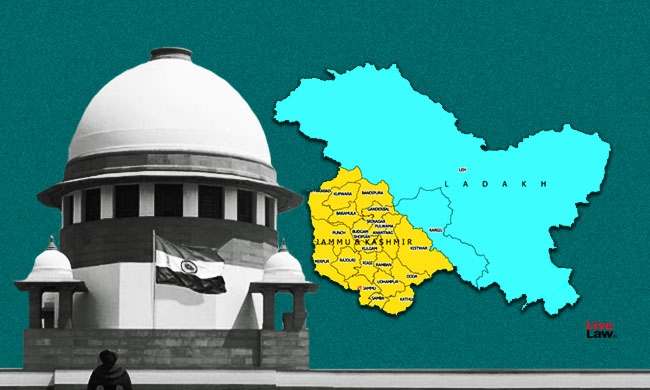 The Central Government has denied the allegations of any procedural anomalies in the abrogation of Article 370 of the Constitution and the subsequent enactment of the Jammu & Kashmir Reorganization Act, 2019. In its affidavit filed in this behalf, the government said that the imposition and the extension of President's Rule in the then State of J&K was wholly legitimate,...

The Central Government has denied the allegations of any procedural anomalies in the abrogation of Article 370 of the Constitution and the subsequent enactment of the Jammu & Kashmir Reorganization Act, 2019.

In its affidavit filed in this behalf, the government said that the imposition and the extension of President's Rule in the then State of J&K was wholly legitimate, and is/was never challenged. Further, it argued that the challenge to the Presidential Order which extended all the provisions of the Indian Constitution to the valley was also done in a legal manner, under Article 370(1)(d).

The submission has come in response to the petitions that were filed challenging the abrogation of Article 370 of the Constitution by a Presidential Orders passed under Article 370, pursuant to which the Central Government had enacted the J&K Reorganization Act, 2019 to bifurcate the State of Jammu and Kashmir into two successor Union Territories – UT of Jammu and Kashmir, and UT of Ladakh.

Earlier, the Supreme Court had set up a Constitution Bench comprising Justices N V Ramana, Sanjay Kishen Kaul, R Subhash Reddy, B R Gavai and Surya Kant to hear all those petitions. The matter is scheduled to come up for hearing on November 14.

The Centre submitted that the President, by virtue of Article 370(3) was empowered to cease the operation of Article 370. The same power was exercised by the President in passing the Constitution (Application to J&K) Order, 2019.

The aforementioned Presidential Order was passed on August 5, 2019, to supersede the Constitution (Application to Jammu and Kashmir) Order, 1954.

The Centre submitted that the power under Article 370(1)(d) was exercised by the President on as many as six occasions when the President's Rule was in force in Jammu & Kashmir and that at no time was any issue/challenge was ever raised against the exercise of this power on the ground that the Legislative Assembly of J&K or the State Government of J&K were not in existence.

Further, reliance was placed on Purartlal Lakhanpal v. President of India, (1962) 1 SCR 688, to state that the President had wide scope of power under Article 370(1)(d) to modify the provisions of the Constitution in their application to J&K. It was held therein,

On the aspect of parliamentary exercise and approval in passing of the J&K Reorganization Act, 2019, the centre said that since the state was under the President's rule at the relevant time, the Parliament was vested with the powers otherwise exercisable by the Legislature of the state. Thereby, in view of Article 356(b), the Parliament was well within its powers to legislate on the impugned Act.

"It is incorrect and misconceived to suggest that any of the applicable Rules of the Rajya Sabha and the Lok Sabha were violated in the course of the passage of the aforementioned resolutions ·on 05.08.2019 and 06.08.2019," the affidavit read.

Stating that the assertion of the Petitioners that Article 3 of the Constitution did not contain the power to create a Union territory was ex-facie untenable, the Centre submitted that the Explanation to Article 3 clearly provided that the references to "State" in Article 3, includes reference to a "Union Territory".

The Centre has maintained its position that the bifurcation of Jammu & Kashmir was done in order to address the grave problems of terrorism, militancy and separatism perpetrating in the valley.

"inimical forces from across the border have exploited the situation. The overall economic development in the State has been severely hindered on account of these factors, and, as a result, the erstwhile State has failed to live up to its full development potential," the affidavit read.

The move was also said to be crucial from the standpoint of economic upliftment of the valley by exploring the potential of tourism in the state and increasing employment opportunities by establishing industries.

"Government of India has initiated a number of development projects/schemes across all regions of Jammu and Kashmir in all the sectors such as Road, Power, Health, Water Resources, Human Resources Development and Tourism etc," the affidavit read.

Considerably, the Act has attained support from the Kahmiri Pandits who moved an intervention application in the matter, stating that the Act will facilitate the return of the exiled Kashmiri Pandits to the valley, by reinstating a safe environment in the region.