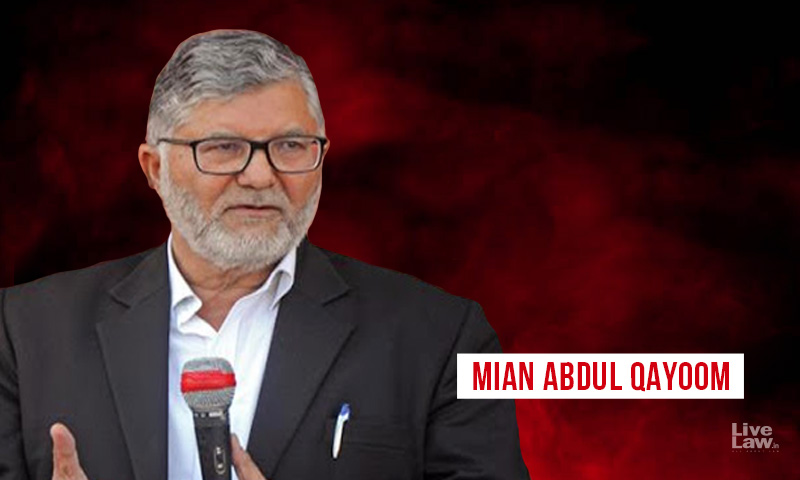 The Central Government on Wednesday told the Supreme Court that Mian Abdqul Qayoom, advocate and President of Jammu and Kashmir High Court Bar Association, will be released from detention immediately.Based on this submission by Solicitor General Tushar Mehta, who appeared for the Centre, the court allowed his release, subject to the condition that Qayoom will remain in Delhi and not go to...

The Central Government on Wednesday told the Supreme Court that Mian Abdqul Qayoom, advocate and President of Jammu and Kashmir High Court Bar Association, will be released from detention immediately.

Based on this submission by Solicitor General Tushar Mehta, who appeared for the Centre, the court allowed his release, subject to the condition that Qayoom will remain in Delhi and not go to Kashmir till August 7 and that he will also not issue any public statements till then.

Senior Advocate Dushyant Dave, appearing for Qayoom, sought for his release tomorrow so that his family could receive him. The Solicitor General agreed to this suggestion.

On Monday, the SG had told the Court that his detention, which is set to expire on August 7, will not be extended further. Qayoom had been under detention since August 5 last year following the abrogation of the special status of Jammu and Kashmir and is currently lodged in Tihar jail, Delhi.

The Court had earlier asked the Centre if it was necessary to keep him under detention, considering his old age.

"He is 73 years old. We want to know on what basis you would like to retain him in Delhi's Tihar. Moreover, his detention period as per order is about to expire.", Justice S K Kaul, the presiding judge of the bench, had asked on July 15.

On June 26, while issuing notice in Qayoom's petition, the SC had ordered that he should be provided with blankets and other essentials at Thiar jail.

The development happened in the petition filed on behalf of Qayoom, challenging the order passed by the J&K High Court on May 28, upholding his detention observing that his "ideology was a like a live volcano" which has the tendency to disturb law and order.

The petition, filed by Advocate-on-Record Aakarsh Kamra on behalf of Qayoom, states that the Petitioner is "Senior Advocate with more than 40 years' standing at the Bar, having served as President of the J&K High Court Bar Association for many terms, including from 2014 till the present".

It further contends that the Respondents had detained Qayoom on the intervening night of 4th and 5th August, 2019, under the provisions of Sections 107 read with 151 of the Jammu and Kashmir Code of Criminal Procedure. His detention had then been prolonged by invoking provisions of the J&K PSA, 1978.

"Thereafter, an order of detention under the Public Safety Act was passed against the detenu on 07.08.2019, and on 08.08.2019, the Petitioner was taken to Central Jail, Agra, Uttar Pradesh, without any prior notice of intimation, where he was kept in solitary confinement."

The order of the Respondents had been challenged by Qayoom before the Jammu and Kashmir High Court, which had been dismissed on 07.02.2020. Subsequently, an appeal filed before the HC was also dismissed on 28.05.2020.

The instant Special Leave Petition before the Apex Court states that "the impugned common judgement and order dated 28.05.2020 is ex facie unsustainable in law as it is premised on stale, irrelevant, remote vague, imprecise and deficient grounds of detention. The impugned judgement and order concluded that most of the grounds in the detention order 'somewhat clumsy' which implies that the High Court too found them wanting".

The plea further comments on the fragility of Qayoom's health on account of him being more than 70 years of age and suffering from life threatening heart ailments showing blockade of artery to the extent of 55-60%, with uncontrolled blood sugar and surviving on one functioning kidney. Furthermore, he sustained a bullet injury in 1995 due to which he suffered cervical vertebral column injury.

"In such conditions, the Petitioner is a high risk vulnerable to COVID-19 due to several co-morbid conditions. Yet, the impugned judgment and order rejects the request for transfer of the Petitioner to a jail closer to home in Srinagar conditional on grounds that are repugnant to the constitutional jurisprudence of Article 19 and 21, and cannot be sustained in law."

In light of the above, the Petitioner had filed the instant petition for special leave to appeal against the "illegal, untenable and unconstitutional findings and observations made in the impugned judgement and order."