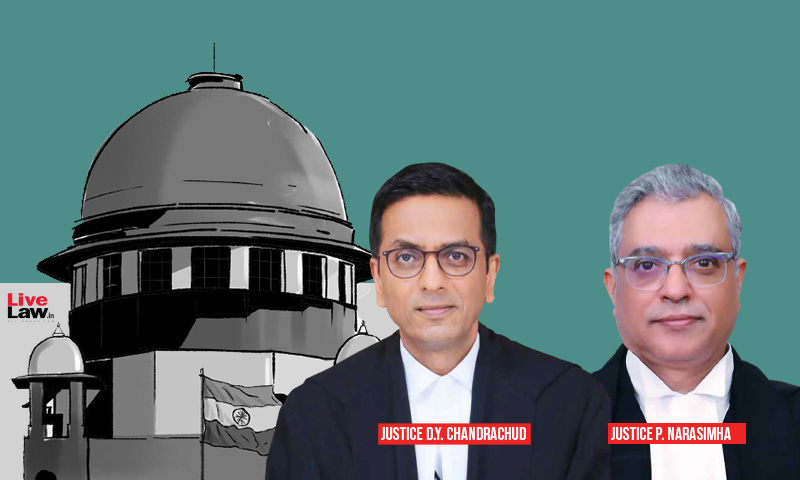 The Supreme Court on Tuesday disapproved the practice of the Central Government putting off the appointments of members to Tribunals despite recommendations by the Search-cum-Selection Committee (SCSC) citing new inputs about the candidates. If fresh materials come to light about the candidates cleared by the SCSC, such materials should be shared with the SCSC. Not doing so will be a deviation from fair process, the Court stated.

A bench comprising Justices DY Chandrachud and PS Narasimha was hearing a contempt petition filed by Advocate Association Bengaluru in 2021 against the then Secretary of the Department of Legal Affairs alleging violation of the directions issued in the Madras Bar Association Case by not appointing members to the Income Tax Appellate Tribunal as per the recommendations made by the SCSC.

Senior Advocate R Basant, appearing for the petitioner, submitted that the SCSC headed by Supreme Court judge Justice AM Khanwilkar had recommended 41 names as ITAT members in 2019, but the Centre only cleared 22 names in 2021 and were holding 19 names.

The bench noted that the files produced by the Centre pursuant to an earlier direction mentioned that "multi-source enquiry" revealed that the integrity of some candidates were doubtful.

The bench expressed surprise at this process carried out after the SCSC recommendation, which was finalised after considering the inputs of the Intelligence Bureau.

"The problem is, if names of members of Bar Association of that HC is mentioned as a source and is known to other side, it'd be an embarrassment", the AG replied.

"Who's the person carrying out that exercise?", Justice Chandrachud asked further.

"Look at arbitrariness of it all. We've a judge, IAS officers part of the committee(SCSC). They go to IB, and people who're doubtful are drawn out. Suppose something comes to light about candidate which wasn't brought to IB's attention, there should be some way that IB and the committee is told about this", Justice Chandrachud commented.

Drawing on his experience as the Chief Justice of the Allahabad High Court and a member of the Supreme Court collegium, Justice Chandrachud said that the "nature of the feedback is dependent in who is being asked".

The Attorney General agreed that it is only fair and proper that subsequent inputs are remitted to the SCSC to enable it to apply its mind. The AG also agreed that in future, it will be ensured that all inputs available with the Government will be placed before the SCSC so that these inputs are duly gone into before the recommendations are finalised.

In this backdrop, the bench stated in the order as follows :

"The IB report, under the extant procedure, is placed before the SCSC before the process of shortlisting takes place and the candidates are called for interview. When the candidates recommended by the SCSC are those who have been cleared by the IB after a detailed analysis of their credentials, integrity and other relevant features, evidently, many of the comments which are contained in the feedback column are of subjective nature without any disclosure of underlying material. This would substantially detract from the fairness of the process. If, as a matter of fact, after the formulation of recommendations by the SCSC, any tangible material comes to the knowledge of the competent authority, it is only proper and appropriate, as submitted by the AG, that such material should be placed before the SCSC. We're in agreement with AG that all inputs bearing on the candidature of each person should be placed by the Union of India before the SCSC.

For instance, in the case of certain candidates, the objection was on the ground that penalty proceedings have been initiated by the CBDT. In this context, learned Senior Advocate Arvind Datar, the amicus curiae, submitted that the provisions of Section 270A of the Income Tax Act result in the automatic initiation of penalty proceeding where the income assessed is higher than the income reported. It would in our view be appropriate if such material which has come to knowledge of competent authority were to be drawn to SCSC's attention which would be in position to determine if any modification in terms of its original recommendation is required".

The bench continued in its order :

"It must be emphasised that SCSC, besides being chaired by a judge of the Supreme Court, also consists of two secretaries of the Union Government. A comprehensive exercise is conducted by the committee, including calling for IB's inputs. All such inputs must be placed with SCSC in advance. In an exceptional circumstance, where subsequent materials comes to light after recommendation, those materials should also be placed before the SCSC".

As regards the present case, the Court directed that the "feedback" collated by the Centre must be produced before the SCSC within a week.

"If the "feed back" is based on any tangible underlying material, such material should be placed before the SCSC. We would request that the Union Government shall carry out this exercise and place all relevant materials within a period of one week. We would request that a meeting of SCSC may be convened thereafter so that a final decision can be arrived at", the bench further directed.

The SCSC chaired by Justice AM Khanwilkar submitted its recommendations on 21.09.2019 and recommended names of 41 persons for appointment as the members of the ITAT. The SCSC had recommended 28 persons (16 as judicial and 12 as accountant members) in main list and addition 13 persons in the wait list.

The Appointments Committee of the Cabinet approved 13 persons for appointment on 11.09.2021 and 9 persons on 01.10.2021 thus making a total of 22 candidates. Out of 28 recommendations in the main list and 13 in the wait list, the ACC selected 16 persons from main and 6 from the wait list.

Senior Advocate Arvind Datar, the amicus curiae in the case, opined that persons from waiting list can be appointed only after exhausting the main list. He further said that the appointments must be in the sequence of ranks assigned to persons.

The AG submitted that the appointments of candidates in the wait list was legitimate, where persons in the main list have refused appointments. He also referred to Section 3(7) of the Tribunal Reforms Act 2021 to say that the SCSC has to recommend 2 names per post from whom the Centre can choose and hence the names in the wait list could have been legitimately considered. Therefore, the AG submitted that no case for exercise of contempt is made out. He added that the Finance Secretary was in no manner connected with the ITAT appointments as per the rules of allocation of business and has been unnecessarily roped in as a respondent. He further said that the then Secretary of the Department of Legal Affairs(Anoop Kumar Mendiratta) has since been appointed as judge of the Delhi High Court in February this year.

The bench closed the contempt proceedings observing that it is not expedient in the interest of justice to pursue the contempt. The contempt petition has therefore been ordered to be re-numbered as an Interlocutory Application.

The Court will consider the larger question related to the validity of the Tribunal Reforms Act in the Madras Bar Association's case in July.

Tribunal Reforms Act 2021 - Centre must place subsequent materials collected about member recommended by the Search Cum Selection Committee before the SCSC - the candidates who are recommended by the SCSC are those who had been cleared by the IB after verifying their credentials, integrity, character and other relevant aspects. Evidently, many of the comments which are contained in the feedback column are of a subjective nature without any disclosure of underlying material. This would substantially detract from the fairness of the process. If, in an exceptional case, subsequent to the formulation and submission of recommendations of the SCSC, any tangible material comes to the knowledge of the competent authority, it is only proper and appropriate, as the Attorney General submits, that such material should be placed before the SCSC. We are in agreement with the submission of the Attorney General that as a general practice, all inputs bearing on the candidature of each prospective applicant under consideration, whether the inputs emanate from the IB or from any other source, ought to be placed by the Union Government on the record of the SCSC in advance, before the recommendations are formulated (Paragraph 12)

Tribunal Reforms Act 2021 - All material must be placed in advance before the SCSC. It must be emphasized that the SCSC, which is chaired by a Judge of the Supreme Court also consists of two Secretaries of the Union Government. A comprehensive exercise is conducted by the Committee, inter alia, involving calling for inputs from the IB, verifying the record of each candidate and conducting personal interaction. Hence, all such inputs, as are available with the Government, must be placed before the SCSC in advance. In an exceptional situation, where certain material comes to light after the submission of the recommendations, that must also be drawn to the attention of the SCSC so as to enable it to consider whether any modification of its recommendations is necessary(Paragraph 12).