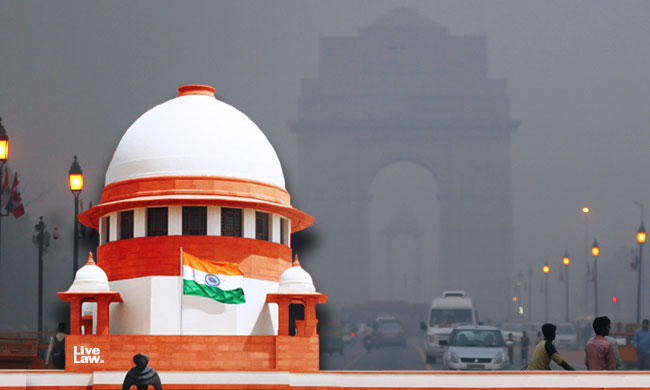 The Centre on Tuesday informed Supreme Court that the foundation work for the Smog Tower project, aimed to help Delhi fight the menace of air pollution, could be started immediately.However, Solicitor General Tushar Mehta also indicated that, as informed earlier, it would take a period of around 10 months to complete the entire project. Notably, today Mehta also assured the Bench, led by...

The Centre on Tuesday informed Supreme Court that the foundation work for the Smog Tower project, aimed to help Delhi fight the menace of air pollution, could be started immediately.

However, Solicitor General Tushar Mehta also indicated that, as informed earlier, it would take a period of around 10 months to complete the entire project.

"IIT Bombay will proceed with the smog tower installation project", asserted the Solicitor.

When the matter had come up for consideration on July 29, the SG had informed Court that IIT Bombay had decided to back out of its role in overseeing the implementation of the project. The Bench, through Justice Mishra, had expressed great displeasure upon learning the same and stated that they would take strict action and hinted at drawing contempt proceedings against the institute. The Bench had also questioned the seriousness of the Government in seeing the project through.

Thereafter, on July 30, Mehta had informed Court that the Government had communicated with officials from Indian Institute of Technology, Bombay (IIT Bombay), pursuant to which, the Institute would be signing a Memorandum of Understanding (MoU) with Central Pollution Control Board (CPCB) and other stakeholders.

After considering the submissions during the course of that hearing, the Apex Court had directed the Centre to file a comprehensive affidavit highlighting all details about the smog tower project in Delhi and why the same was not completed as per Court Orders.

Pursuant to the same, today the Solicitor apprised the Court of the real time progress and the responsibilities of the various stakeholders in the project.

It was informed that the National Buildings Construction Corporation (NBCC) will construct the tower, while TATA will be responsible for the installation work.

Mehta assured a contract depicting all details will be drawn up and ready within 3-4 days. Additionally, the SG also suggested that National Thermal Power Corporation (NTPC) Ltd. be impleaded as a party to this case.

The matter will now again be taken up on Monday, August 10, when the Centre will be expected to give a clearer timeline regarding the work towards the proposed project.

During the previous hearing, SG Mehta had submitted that it would realistically take around 10 months to complete the project.

"I have been told that the drawing of the tower will be made available by IIT Bombay in 2 months. The technical part will take 3 months and setting it up will take approximately 10 months", informed Mehta.

In December 2019, a Supreme Court Bench headed by Justice Arun Mishra directed the Centre and Delhi Government to ensure that a smog tower, essentially large-scale air purifiers, was set up in the Connaught Place area of New Delhi to tackle the annual problem faced by the national capital in winters. This was to be done within 3 months, as a pilot project.

The concept and technology involved was discussed with a professor of IIT Bombay, who was part of a High-Power Committee looking into various technologies and options to tackle air pollution. Thereafter, the Judges gave IIT Bombay the responsibility to take up the project.

The Centre had also assured the Court that smog guns and other similar measures would be in place, especially in areas of the national capital where pollution levels are highest. The IIT Bombay Professor, however, had opined that it would not be feasible to set up smog towers before August 2020.