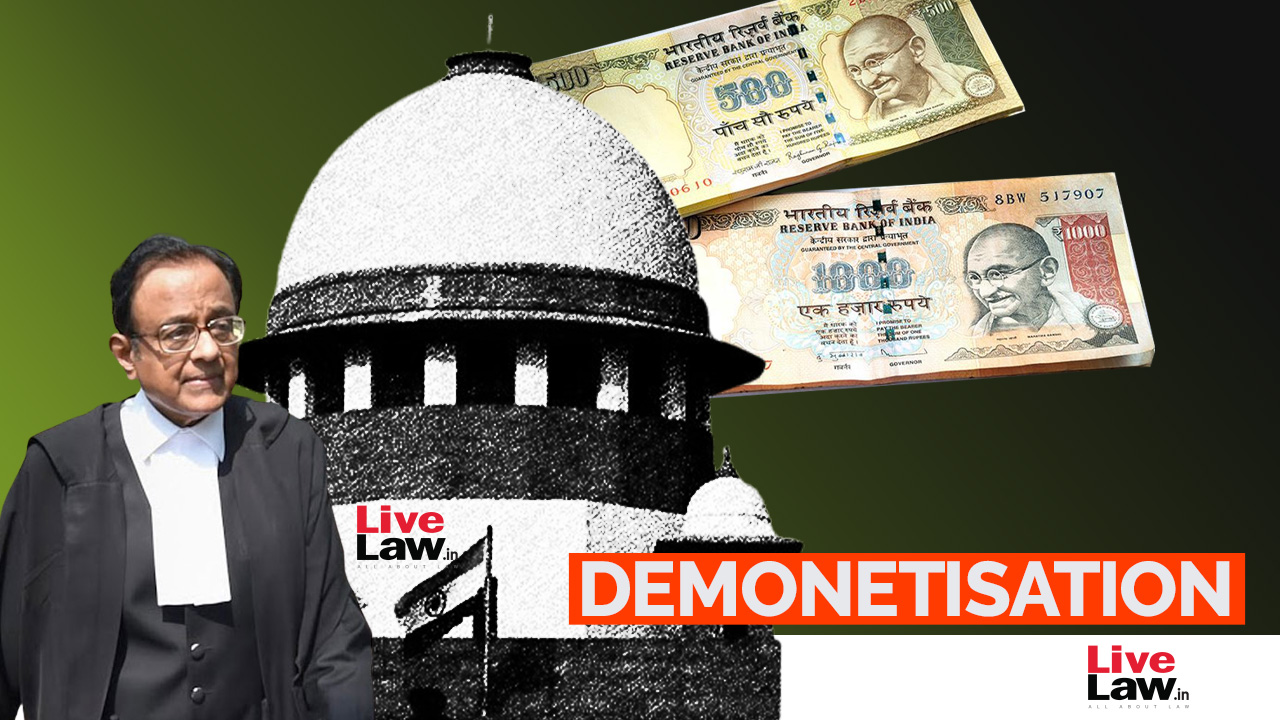 Neither the Central Board of the Reserve Bank of India, nor the Union Cabinet had full information with respect to the monumental consequences of demonetisation, Senior Advocate and former Union Finance Minister, P. Chidambaram told the Supreme Court on Thursday.

"No one was told that 86% of the total currency would be withdrawn. This is not a guess, but an informed guess," he submitted before the Constitution Bench hearing a batch of 58 petitions challenging the Union Government's decision to demonetise high-value currency notes of Rs 500 and Rs 1,000 in November 2016. The five-judge Bench, comprising Justices S. Abdul Nazeer, B.R. Gavai, A.S. Bopanna, V. Ramasubramanian, and B.V. Nagarathna, is considering, inter alia, the legality of the November 8 circular that set the policy in motion, six years after it sent shockwaves through the nation.

The senior counsel, while arguing that the decision-making process that led to the banknote demonetisation was "deeply flawed", informed the Bench that the Central Government was still "holding back" four crucial documents that they had been directed to furnish. On October 12, the bench had asked the Centre and the Reserve Bank of India to produce the relevant documents. "You cannot keep them away from us. We want to see them," Justice Nazeer, the presiding judge, had commanded.

"We still do not have the November 7 letter from the Union Government to the Reserve Bank of India, the agenda note placed before the Central Board of the Reserve Bank, the minutes of the Central Board meeting and their recommendations, and the actual Cabinet decision on November 8. These documents have not yet been placed in the public domain, despite the passage of six years," the senior counsel submitted. He told the Bench that the Government had shied away from disclosing details such as who attended the critical November 8 meeting of the Central Board, whether the minimum number of directors as prescribed under the Reserve Bank of India Act, 1934 and the rules and regulations made under it, was present, or whether the provisions related to giving advanced notice to the directors were complied with.

Chidambaram theorised, "My calculation shows that this entire exercise was done in about 26 hours. The letter reached the RBI on November 7 post-afternoon, after which the Central Board was called, presumably by telephone to meet in Delhi on November 8. They meet at 5:30 PM, within an hour or an hour and a half, the recommendation is taken by hand to the Cabinet, which is waiting. Then, the Prime Minister goes on television at 8 PM." Expressing his profound disapproval, the senior counsel said, "This is the most outrageous decision-making process which makes a mockery of the rule of law."

The senior counsel also pointed out that neither the Central Government, nor the Reserve Bank had furnished material particulars regarding the decision-making process in their counter-affidavits. Discrepancies between the affidavits filed by the Centre and the bank were highlighted. For instance, while the testimony produced by the latter cited financial inclusion and incentivisation, digitisation, and shifting to a cashless economy as reasons for undertaking the note-bandi exercise, no such insinuations had been made in the 2016 notification by the Ministry of Finance. The government's affidavit, unlike the one submitted by the Reserve Bank, was silent on "discussions" that purportedly took place over a span of six months before the fateful day of November 8, Chidambaram observed. "Let them show the documents then. Unless this material is available, it will be difficult to come to a conclusion as to the application of mind," Chidambaram vehemently argued before the five-Judge Constitution Bench.

The real-time updates posted from the hearing can be read here.