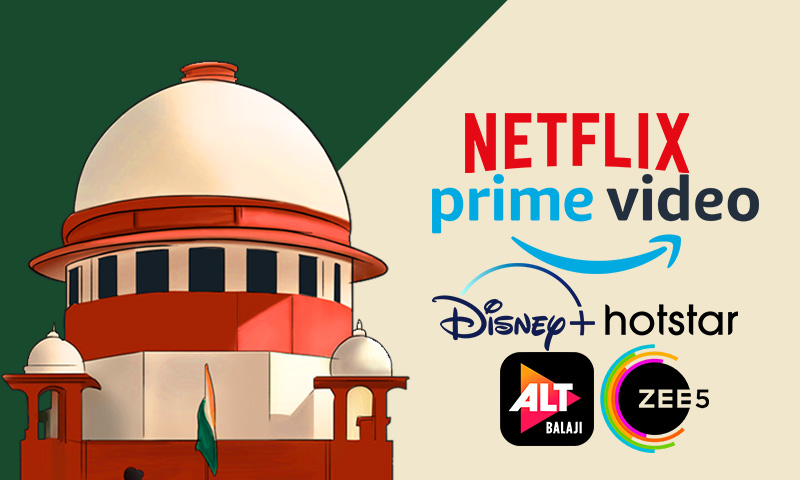 The Supreme Court on Friday expressed dissatisfaction about the new rules framed by the Central Government under the Information Technology Act to regulate Over The Top(OTT) platforms like Netlifx, Prime Vidoe etc., social media platforms and digital news portals."These OTT Rules don't have any teeth; they're only just guidelines", orally observed the Supreme Court on Friday during a...

The Supreme Court on Friday expressed dissatisfaction about the new rules framed by the Central Government under the Information Technology Act to regulate Over The Top(OTT) platforms like Netlifx, Prime Vidoe etc., social media platforms and digital news portals.

"These OTT Rules don't have any teeth; they're only just guidelines", orally observed the Supreme Court on Friday during a plea filed by filed by Amazon Prime's Commercial Head, Aparna Purohit, challenging the Allahabad High Court Judgment denying pre-arrest bail to her in the criminal cases registered in connection with the web series "Tandav".

The Court was referring to the Information Technology (Guidelines For Intermediaries And Digital Media Ethics Code) Rules, 2021 notified by the Centre last week.

The Justice Ashok Bhushan-led Bench stated, "We have received the Rules you have filed. These Rules don't have any teeth. There's no provision for prosecution or fine. They're only just guidelines". Without a legislation, there cannot be effective control, Justice Bhushan remarked.

The Solicitor General submitted that the new rules were brought as a balance between "no-censorship and internal self-regulation". The SG agreed to produce a better draft of the rules for the consideration of the court.

Indicating that the issue of OTT regulation will also be considered in the instant case, the bench added Union of India as a party. The bench recorded its observations about the new rules in the order as follows :

"One of the issues, which have been cropped up in the facts of the present case, is regarding control and regulation of platform on which web-series are released.

A perusal of the Rules indicate that the Rules are more and more in the form of guidelines and have no effective mechanism for either screening or taking appropriate action for those who violates the guidelines.Mr. Tushar Mehta, the learned Solicitor General submits that the Government shall consider and take appropriate steps for regulation or legislation as may be found fit by the Government and the same shall be placed before the Court"

It went on to record that the SG had submitted that appropriate steps would be taken and any regulation or legislation thought fit would be placed before the Court.

During the previous hearing, the Supreme Court had observed that screening of OTT content was required, with some platforms even exhibiting pornographic material. On being apprised of the new Information Technology Rules, 2021, the Court had directed the SG to circulate the same.

Another bench of the Supreme Court is considering a batch of PILs seeking guidelines to regulate OTT platforms. The Central Government has sought the transfer of cases pending in the High Courts on this subject to the Supreme Court.