[Breaking] Certificate Under Section 65B(4) Evidence Act Is A Condition Precedent To The Admissibility of Electronic Evidence: SC [Read Judgment] 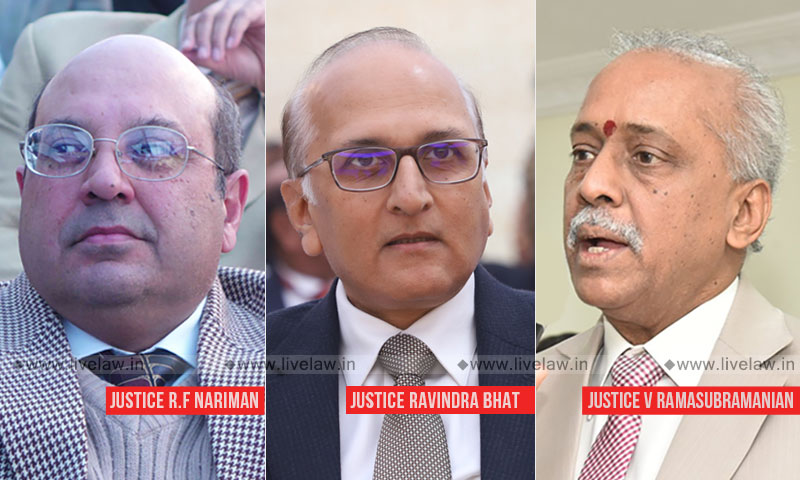 x
Answering a reference, the 3-judge bench held that the dictum in "Anvar PV v PK Basheer" need not be revisited.

The Supreme Court has held that the certificate required under Section 65B(4) is a condition precedent to the admissibility of evidence by way of electronic record. The bench headed by Justice RF Nariman further held that, in a fact-circumstance where the requisite certificate has been applied for from the person or the authority concerned, and the person or authority either refuses to...

The Supreme Court has held that the certificate required under Section 65B(4) is a condition precedent to the admissibility of evidence by way of electronic record.

The bench headed by Justice RF Nariman further held that, in a fact-circumstance where the requisite certificate has been applied for from the person or the authority concerned, and the person or authority either refuses to give such certificate, or does not reply to such demand, the party asking for such certificate can apply to the Court for its production under the provisions aforementioned of the Evidence Act, CPC or CrPC.

The bench has also clarified that that the required certificate under Section 65B(4) is unnecessary if the original document itself is produced. The court said that the judgment in Anvar P.V. v. P.K. Basheer & Ors. (2014) 10 SCC 473 need not be revisited, subject to the above clarifications.

The bench also overruled the 2018 decision delivered by a 2-judge bench in the case Shafi Mohammad vs State of Himachal Pradesh.

A three Judge Bench of the Supreme Court comprising Justices RF Nariman, S Ravindra Bhat and V Ramasubramanian delivered its judgment on a reference on the question "Is requirement of certificate U/s 65-B(4) Evidence Act mandatory for production of electronic evidence?" (Arjun Panditrao Khotkar vs Kailash Kushanrao Gorantyal and others).

A two Judge Bench of Justices Ashok Bhushan and Navin Sinha had referred the question in view of the conflict between Shafhi Mohammad vs. State of Himachal Pradesh and Anvar P.V. vs. P.K. Basheer.  It was held in Shafhi Mohammad vs. State of Himachal Pradesh that, a party who is not in possession of device from which the electronic document is produced, cannot be required to produce certificate under Section 65B (4) of the Evidence Act. In that case, the bench was considering the issue whether videography of the scene of crime or scene of recovery during investigation should be necessary to inspire confidence in the evidence collected. In Anvar P.V. vs. P.K. Basheer , it was observed that an electronic record by way of secondary evidence shall not be admitted in evidence unless the requirements under Section 65¬B are satisfied. Thus, in the case of CD, VCD, chip, etc., the same shall be accompanied by the certificate in terms of Section 65-B obtained at the time of taking the document, without which, the secondary evidence pertaining to that electronic record, is inadmissible, it was held.

Answering the reference, the bench made the following observations:

The required certificate under Section 65B(4) is unnecessary if the original document itself is produced.

"This can be done by the owner of a laptop computer, computer tablet or even a mobile phone, by stepping into the witness box and proving that the concerned device, on which the original information is first stored, is owned and/or operated by him. In cases where the "computer" happens to be a part of a "computer system" or "computer network" and it becomes impossible to physically bring such system or network to the Court, then the only means of providing information contained in such electronic record can be in accordance with Section 65B(1), together with the requisite certificate under Section 65B(4). The last sentence in Anvar P.V. (supra) which reads as "…if an electronic record as such is used as primary evidence under Section 62 of the Evidence Act…" is thus clarified; it is to be read without the words "under Section 62 of the Evidence Act,…" With this clarification, the law 81 stated in paragraph 24 of Anvar P.V. (supra) does not need to be revisited."

The court observed that the major premise of Shafhi Mohammad (supra) that such certificate cannot be secured by persons who are not in possession of an electronic device is wholly incorrect. An application can always be made to a Judge for production of such a certificate from the requisite person under Section 65B(4) in cases in which such person.

The Court may in appropriate cases allow the prosecution to produce such certificate at a later point in time.

In Anvar P.V. (supra), it was observed that such certificate must accompany the electronic record when the same is produced in evidence. In this regard, the Court clarified thus:

"We may only add that this is so in cases where such certificate could be procured by the person seeking to rely upon an electronic record. However, in cases where either a defective certificate is given, or in cases where such certificate has been demanded and is not given by the concerned person, the Judge conducting the trial must summon the person/persons referred to in Section 65B(4) of the Evidence Act, and require that such certificate be given by such person/persons. This, the trial Judge ought to do when the electronic record is produced in evidence before him without the requisite certificate in the circumstances aforementioned. This is, of course, subject to discretion being exercised in civil cases in accordance with law, and in accordance with the requirements of justice on the facts of each case. When it comes to criminal trials, it is important to keep in mind the general principle that the accused must be supplied all documents that the prosecution seeks to rely upon before commencement of the trial, under the relevant sections of the CrPC. "

"In terms of general procedure, the prosecution is obligated to supply all documents upon which reliance may be placed to an accused before commencement of the trial. Thus, the exercise of power by the courts in criminal trials in permitting evidence to be filed at a later stage should not result in serious or irreversible prejudice to the accused. A 63 balancing exercise in respect of the rights of parties has to be carried out by the court, in examining any application by the prosecution under Sections 91 or 311 of the CrPC or Section 165 of the Evidence Act. Depending on the facts of each case, and the Court exercising discretion after seeing that the accused is not prejudiced by want of a fair trial, the Court may in appropriate cases allow the prosecution to produce such certificate at a later point in time. If it is the accused who desires to produce the requisite certificate as part of his defence, this again will depend upon the justice of the case - discretion to be exercised by the Court in accordance with law. "

The Court also issued general directions to cellular companies and internet service providers to maintain CDRs and other relevant records for the concerned period (in tune with Section 39 of the Evidence Act) in a segregated and secure manner if a particular CDR or other record is seized during investigation in the said period. "Concerned parties can then summon such records at the stage of defence evidence, or in the event such data is required to cross-examine a particular witness. This direction shall be applied, in criminal trials, till appropriate directions are issued under relevant terms of the applicable licenses, or under Section 67C of the Information Technology Act." the bench added.

The court also directed that appropriate rules and directions should be framed in exercise of the Information Technology Act, by exercising powers such as in Section 67C, and also framing suitable rules for the retention of data involved in trial of offences, their segregation, rules of chain of custody, stamping and record maintenance, for the entire duration of trials and appeals, and also in regard to preservation of the meta data to avoid corruption. Likewise, appropriate rules for preservation, retrieval and production of electronic record, should be framed, the bench said.