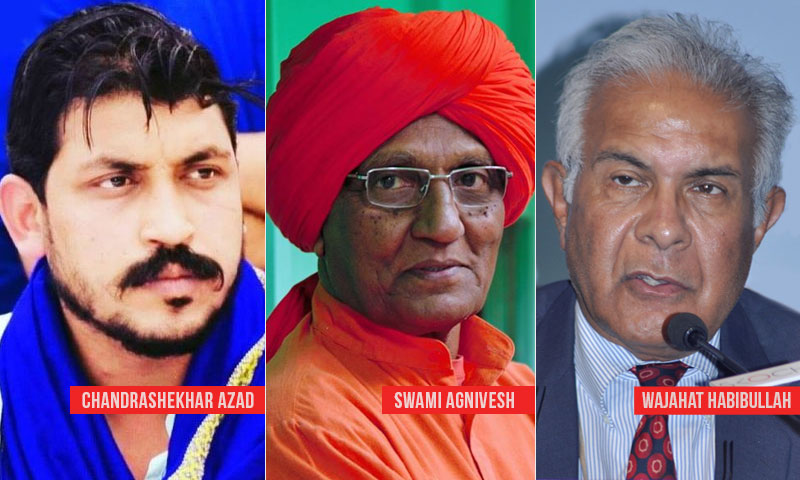 Leader of Bhim Army Chandra Shekhar Aazad, social activist Swami Agnivesh and former CIC Wajahat Habibullah along with three others have moved the Supreme Court challenging the constitutional validity of the Citizenship Amendment Act, 2019. The plea proceeds on the premise that the CAA is violative of Article 14 of the Constitution inasmuch as the classification made thereunder...

The plea proceeds on the premise that the CAA is violative of Article 14 of the Constitution inasmuch as the classification made thereunder is arbitrary, devoid of intelligible differentia and has no nexus with the object sought to be achieved by the Citizenship Act, 1955. In fact, it is alleged that the govt. has attempted to reverse the effects of Partition and emerge as protector of Hindus and become a "Hindu Rashtra".

To this end it was submitted that the CAA creates a classification based on religion by excluding the Muslim population, thereby violating the basic structure of the Constitution.

"the Citizenship Amendment Act, 2019 is a sinister precursor to the National Population Register and the National Register of Citizens which are tools for identification Muslims and backward sections of citizens. The intent to stealthily ensure that Muslims and backward sections of citizens are excluded from the mainstream Indian population and placed in Detention Centers is clear and is being openly boasted about," the plea read.

As per the CAA, Hindus, Sikhs, Buddhists, Parsis, Jains and Christians who migrated to India without travel documents from Pakistan, Bangladesh and Afghanistan on or before December 31, 2014 will not be regarded as illegal migrants.

The plea states that the Act treats migrants belonging to certain specific religions as a separate class from other illegal migrants and creates a class within a class which is impermissible. It further fails to qualify the 'neighboring country' test so far as it covers persons from only three neighboring countries i.e. Pakistan, Afghanistan and Bangladesh and excludes other neighboring countries such as Myanmar, Nepal, Sri Lanka and Maldives.

"only migrant Muslims will now remain 'foreigners' by virtue of an executive Order (Foreigners Amendment Order 2015) making them illegal migrants under the Citizenship Act, 1955.

a conscious decision has been taken to keep out certain persecuted minorities like the Ahmaddiyas & Bohras Ismailis, Hazaras, Atheists from Pakistan, Rohingyas from Myanmar, Tamils from Sri Lanka, Buddhists from Nepal and Jews, Yemenis," it was submitted.

Moreover, it is alleged that in order to reserve flexibility in including/excluding certain groups of people, the govt. has deliberately not prescribed a definition of 'Persecuted Minorities' in the Citizenship Amendment Act.

The Petitioners have contended that the government had been "fraudulently" trying to pave way for CAA since 2015, by stealthily diluting various Statute(s) and the Constitution. To this end, they pointed out that the safeguards placed in the Foreigner's Amendment Order and Passport (Entry into India) Act 1920 and Rules to ensure that unknown persons do not enter India without proper verification, was quietly diluted by the Foreigners Amendment Orders, 2015 and 2016 and Passport (Entry into India) Amendment Rules, 2015 and 2016.

They further contended that delegation of essential legislative function is impermissible under Section 18 of the Passport (Entry into India) Act, 1920. Thus, the govt. was wrong in delegating power to modify legislative policy and allowing the enactment of the aforementioned Rules.

It is asserted that considering the gravity of the impact of the CAA, the Parliament ought to have referred the Bill to the Joint Parliamentary Committee. However, on the contrary, it was passed by both the houses in great haste, within two days of being introduced.

"the CAA has significant and long term effects on the demography, economy, education, health and national security of India and the same deserved to have been examined in detail either by the Parliamentary Committees or eliciting opinions of the States and Union Territories," they said.

They pointed out that as per the Report of the Joint Parliamentary Committee for the Citizenship Bill 2016, the Research and Analysis Wing of the Government of India, CAA could be misused by Foreign Agents to infiltrate India, thereby causing a National threat to the Security of the Nation.

The plea also questions the rationale behind prescribing a cutoff date of 31st December 2014. "The said cut-off date discriminates against those persons who have entered India after 31.12.2014 and is arbitrary, illegal, devoid of intelligible differentia and deserves to be struck down," it read.

The petition also discloses that even while the CAA does not specify any procedure for granting citizenship thereunder and no procedure has been notified by the Central govt. even after the Act came into force, some States like Gujarat and U.P have already begun the process of granting citizenship.

The Petitioners have also assailed the Citizenship (Registration of Citizens and Issue of National Identity Cards) Rules, 2003 and Citizenship Rules, 2009 as ultra vires the parent statute, i.e., Citizenship Act, 1955 and Constitution of India inasmuch as they seek to "supplant" the provisions of the Act and are in violation of Part III of the Constitution.

Notably, Aazad was arrested on December 20 on allegations that he had incited violence during an anti-CAA protest at Daryaganj. On January 15, a Delhi Court allowed his bail application on a condition that he will stay out of Delhi for a month and will remain in his native place Saharanpur in Uttar Pradesh during the said period.

Subsequently, he moved Tis Hazari Sessions court seeking modification of the said condition which was allowed yesterday. The court has allowed him to visit Delhi whenever for election purposes. However, he has been asked to inform about his visit and day schedule to the DCP(Crime).

About 140 writ petitions which challenge the constitutional validity of the CAA were listed before the Supreme Court today. The bench comprising CJI SA Bobde, Justices Abdul Nazeer and Sanjiv Khanna have granted four weeks time to the Central Government to file their response.