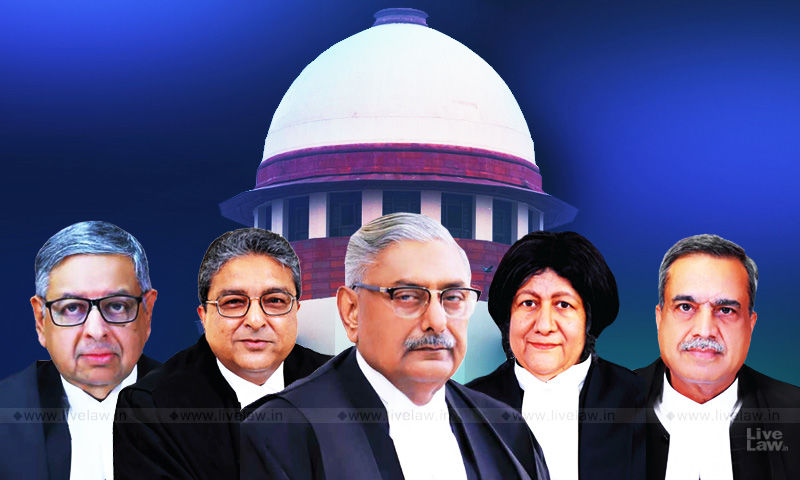 The issue of validity of the Government Office Ms. No.3 dated 10.1.2000 issued by the erstwhile State of Andhra Pradesh providing 100% reservation to the Scheduled Tribe candidates out of whom 33.1/3% shall be women for the post of teachers in the schools in the scheduled areas in the State of Andhra Pradesh was referred to the 5 Judge Bench led by Justice Arun Mishra and comprising...

The issue of validity of the Government Office Ms. No.3 dated 10.1.2000 issued by the erstwhile State of Andhra Pradesh providing 100% reservation to the Scheduled Tribe candidates out of whom 33.1/3% shall be women for the post of teachers in the schools in the scheduled areas in the State of Andhra Pradesh was referred to the 5 Judge Bench led by Justice Arun Mishra and comprising of Justice Indira Banerjee, Justice Vineet Saran, Justice M.R. Shah and Justice Aniruddha Bose.

The first question referred for consideration was: "In Re: Question No.1: What is the scope of Para 5(1) of Schedule V of the Constitution of India?; and Question No.1(a): Does the provision empower the Governor to make a new law?"

The Bench opined that Para 5 of Schedule V deals with the law applicable to the scheduled areas. The non­obstante clause contained merely authorises the Governor to issue a notification to the effect that any particular Act of the Parliament or of the State Legislature shall not apply to a scheduled area or any part thereof. It also empowers the Governor to create exceptions and modifications as he may specify in the notification concerning the applicability of such Act of Parliament or legislature of the State and that the Governor is also empowered to issue notification giving it a retrospective effect.

"The Governor lacks the authority to enact a new Act under the provisions contained in para 5(1) of Schedule V of the Constitution and he cannot act beyond its purview and has to exercise power within the four corners of the provisions." writes Justice Mishra.

The Bench while declaring that the notification is ultra vires to Para 5(1) of Schedule V of the Constitution, also stated that the power of the Governor to modify cannot be used to supplant, supersede or juxtapose the existing law.

The next question considered by the Bench was: "In Re: Question No.1(b): Does the power extend to subordinate legislation? "

The Bench observed that the rules framed under the proviso to Article 309 of the Constitution cannot be said to be the Act of Parliament or State legislature.

The Bench noted that despite the rules have the statutory force, they cannot be said to have been framed under any Act of Parliament or State legislature and that the rules remain in force till such time the legislature exercises power.

The Bench pronounced that, "The power of the Governor under Para 5(1) of Schedule V of the Constitution is restricted to modifying or not to apply, Acts of the Parliament or legislature of the State. Thus, the rules could not have been amended in the exercise of the powers conferred under Para 5(1) of Schedule V. The rules made under proviso to Article 309 of the Constitution cannot be said to be an enactment by the State legislature. Thus, in our opinion, it was not open to the Governor to issue the impugned G.O. No.3/2000."

The next question that came up for consideration before the bench was: "In re: Question No.1(c): Can the exercise of the power conferred in Para 5 of the Fifth Schedule override fundamental rights guaranteed under Part III?"

The Bench noted that the nonobstante clause cannot be construed as taking away the provision outside the limitations on the amending power and has to be harmoniously construed consistent with the foundational principles and the basic features of the Constitution.

The Bench declared that the power is conferred on the Governor to deal with the scheduled areas but is not meant to prevail over the Constitution.

The Justices held that the power of the Governor is pari passu with the legislative power of Parliament and the State and is thus, subject to the provisions of Part III of the Constitution.

"the power of the Governor does not supersede the fundamental rights......The Constitution can never aim to confer any arbitrary power on the constitutional authorities." writes Justice Mishra.

The next question referred to the Bench was: "In Re: Question No.1(d): Whether the exercise of power under the Fifth Schedule of the Constitution overrides any parallel exercise of power by the President under Article 371D?"

The Bench iterated that the object and purpose of legislations or provisions with respect to non­obstante clause are distinct and thus, the court will not see any conflict.

The Bench highlighted that there is a clear repugnancy between the notification issued by the President and that subsequent order issued by the Governor in the exercise of powers under Para 5, Fifth Schedule of the Constitution.

"It is not possible to harmonise both the notifications. Apart from that, there is total deprivation. It is not factually correct that Presidential Order did not deal with Scheduled Areas. The Presidential Order applied to the entire State and carved out a special provision that applies with a non­obstante clause." affirmed the Justices.

Finally, the Bench declared that the Governor is competent to issue an order which is not in conflict with the Presidential Order.

"In our opinion, 100 per cent reservation could not have been provided as that violates the Presidential Order." observed the Bench.

The second questioned referred to the Bench was: "In Re: Question No.2: whether 100% reservation is permissible under the Constitution? "

The Justices remarked that it is apparent that despite more than 72 years of attaining independence, we are not able to provide benefits to the bottom line, i.e., down­trodden and oppressed classes and the Benefits meant for such classes are not reaching them.

They further opined that the social disparities, economic and backwardness should have been wiped out within a period of 10 years, instead there is a demand to not only increase the reservations but also to provide reservations within the reservation.

"Question emanating in the case is how to balance the rights of scheduled castes and scheduled tribes. Whether providing 100% reservation in favour of any particular class is permissible?" contemplated the Bench.

Terming the action of the Governor as irrational and violative of Fundamental Rights, the Bench stated, "We find that G.O. Ms. No.3/2000 is wholly impermissible and cannot be said to be legally permissible and constitutionally valid."

The Justices remarked that in the present case 100 percent reservation has been provided and thus, it cannot be said to be a case of classification that has been made under Article 16(1).

They further stated that if its assumed to be a case of classification under Article 16(1), it would have been discriminatory and grossly arbitrary without rationale and violative of constitutional mandate.

The Bench iterated that the incumbents of various categories have the right to stake a claim for the employment of which they have been deprived and thus, it is not a matter of classification.

The Bench held that since the reservation under Article 16(4) was made, by way of 100% reservation, the employment to others was illegally deprived and they have no chance of employment as against the post of teachers elsewhere because of the order under Article 371D in which district/zone is a unit.

"It is a clear case of tinkering with reservation." writes Justice Mishra.

The last question considered by the Bench was: "In Re: Question No.4: Whether the conditions of eligibility that is the origin and cut­off date to avail the benefit of reservation in the notification is reasonable:"

The Bench remarked that the condition of continuously residing in the district is ex facie arbitrary and is violative of Article 15(1), which provides that State shall not discriminate inter alia on the ground of place of birth.

The Bench observed that the conditions above deprive the scheduled tribes who are permanent residents of the areas and have settled after the said cut­ off date.

The Justices declared that the classification created is not only illegal, unreasonable, and arbitrary but also defeats the rights of other similar tribes who might have settled after 26th January 1950 in the area taken care of in the Presidential Order under Article 371­D.

The Bench remarked that, "It is rightly apprehended by appellants that the State may again by way of mis­adventure, resort to similar illegal exercise as was done earlier. It was least expected from the functionary like Government to act in aforesaid manner as they were bound by the dictum laid down by this Court in Indra Sawhney (supra) and other decisions holding that the limit of reservation not to exceed 50%."

As a sequel to the quashing of G.O. Ms. No.3 of 2000, the Bench conceded to the plea of the State and other Respondents and agreed to save the appointments on the condition that the reorganised States i.e. the States of Andhra Pradesh and Telangana not to attempt a similar exercise in the future.

The Bench added that in case the Government exceeds the limit of reservation, then there shall not be any saving of the appointments made, w.e.f. 1986 till date.

The Bench directed the respondent ­States to not to exceed the limits of reservation in future.

The Bench concluded by quantifying the cost of appeal at Rupees Five Lakhs and declaring that the same to be shared equally by the States of Andhra Pradesh and Telangana.