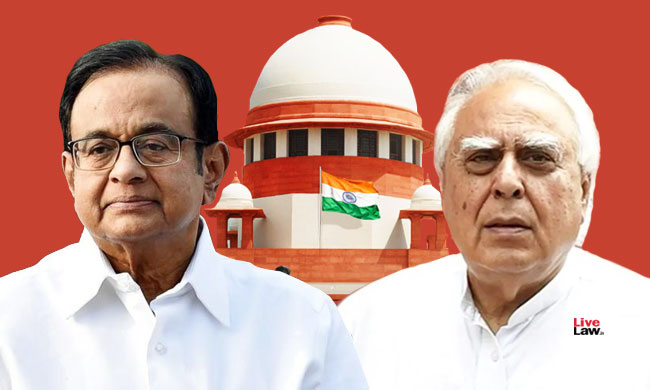 In a relief to former Union Finance Minister P Chidambaram, the Supreme Court on Monday extended the interim protection from arrest earlier granted to him in the case registered by the Enforcement Directorate for alleged money laundering in the INX Media FDI transactions till tomorrow.

The bench of Justices R Bhanumati and A S Bopanna passed the order after a lengthy hearing session which started around noon and took the entire post-lunch session.

The hearing will resume tomorrow at 12 noon.

The same bench on August 23 had given Chidambarma interim protection from arrest till today.

Earlier today, the bench dismissed the petition filed by Chidambaram in respect of the CBI case as 'infructuous' on the ground that he has already been arrested and remanded. The Court granted him liberty to move the trial court for regular bail and observed that the trial court should consider the application without being influenced by the findings of the High Court.

Senior Advocate Kapil Sibal, appearing for  Chidambaram, submitted that the Delhi High Court relied on the allegations in a sealed cover note submitted by the ED to deny pre-arrest bail. Chidambaram had no notice of those allegations.

The HC judge did not make any application of mind. The judgment merely "copy pasted" the allegations in the sealed cover note. The arguments by ED were passed off as findings in the judgment. Even in those findings, one cannot find any link between Chidambaram and INX.

"Where is the application of mind by the HC judge when paragraphs are copied word for word and comma for comma?", Sibal asked.

The Solicitor General denied giving the note and said only the case diary was handed over to the HC judge.

"They should have summoned and interrogated Chidambaram if there were documents that were found between filing of FIR and arrest. They didn't.", Sibal submitted.

"This has become a media trial. The investigating agencies leak documents just before the hearing for bail", he added.

The ED has not bothered to confront Chidambaram with the documents which they claimed to have recovered. When he was interrogated on Julne 6, 2018, he was not asked about his alleged foreign accounts.

The crux of the allegation is that Karti tried to influence FIPB officials to grant ex post facto approval for a downstream investment by INX media. None of the board members said that Karti approached them.

Karti has got bail. The entire case talks of a company called Advantage Strategies. Karti is neither a shareholder nor a director of the company. The ED however alleges without any basis alleges that Kari is controlling the company.

"ED claims that fake invoices to the tune of ₹3.5 Cr were raised to be paid to Karti's alleged companies. Where's the money?
There's an entry of ₹10 lakh. And if, for arguments sake, we accept that this payment was made, even then, under PMLA, the minimum amount to attract charges was ₹30 lakh. This was before the amendment, after which the amount has increased further.", Sibal said.

The clearance for INX FDI was granted by the Foreign Investment Promotion Board consisting of six secretaries. Chidambaram as the Finance Minister played no role in the process, except giving sanction to the FIPB clearance in ordinary course of business.

Chidambaram has never said 'no' whenever he was called for questioning. The ED should put to him whatever materials they claim to have recovered. But that has not happened.

The SC should examine whether the HC exercised its jurisdiction under Section 438 of Code of Criminal Procedure wisely and properly. There's great humiliation and distress attached to arrest. As soon as a person is arrested, people believe that he must be guilty.

Come to court and seek custodial interrogation if you think he's been evasive. You had 2 years to ask him all these questions of payments and shell companies, when did you ask him? You haven't. The material you claim to have has never been put to him : Sibal

Sibal : They allege I could tamper with evidence. What could i tamper?Properties abroad or bank accounts? In that case, to do so, I must have really long arms.
SG- yes, that's the case
Sibal- It's you who has very long arms, which is why I'm here and you're there#PChidamabaram

The case is based on the allegation that while being the Finance Minister in 2007, Chidambaram had given approval for about Rs.305 crores Foreign Direct Investment by INX by taking reciprocal benefits from the media house through the companies associated with his son Karti Chidambaram.

The Delhi High Court dismissed his application for anticipatory bail on August 20 after observing that it was a "classic case of money laundering". Chidambaram was termed the "kingpin and key conspirator" of the alleged corruption deal.

After that, the CBI arrested Chidambaram from his Jor Bagh residence on August 21.

The CBI Judge Ajay Kumar Kuhar on August 22 allowed CBI remand for four days observing that the allegations were "serious in nature" and a "detailed and in depth investigation is required in the case".