Chidambaram Bail - "They Didn't Arrest Me From Timbuctoo Or From A Jungle, Why Do They Say I May Abscond?": Dr.Singhvi 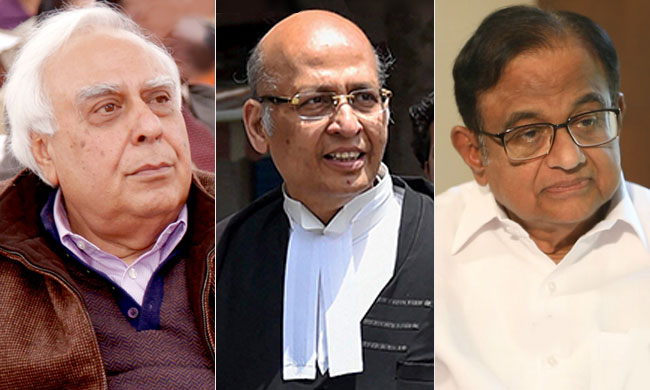 As P Chidambaram's bail plea in the INX Media case came before the 3 judge bench of Justices R Bhanumati, AS Bopanna and Hrishikesh Roy, the CBI sought an adjournment due to the unavailability of SG Tushar Mehta, who was engaged in another matter. However Justice Bhanumati did not accede to the request and arguments commenced through Senior advocate Kapil Sibal who was appearing for the former Union Home and Finance Minister.

Referring to the High Court judgment that had denied Chidambaram bail, Sibal highlighted that it had been noted by the judge that Chidambaram could not have tampered with evidence, and that he was not a flight risk. The only ground for denying bail was on the presumption that he could influence witnesses, as per the judgment. Sibal argued that bail cannot be denied on a presumption that witnesses could be influenced. Only if a witness approaches him, or it is shown that he is influencing witnesses can bail be cancelled (after being granted), he argued.

On the point of Chidambaram being a flight risk, Sibal said urged that there was no possibility of him faking a passport and fleeing as he's a well known face and a respected member of parliament.

It was reiterated that despite not finding any substantial material, the High Court had said that the 'possibility (of influencing witnesses) cannot be ruled out', which is an apprehension and an apprehension is not sufficient to deny bail.

Sibal also mentioned that the notice pasted outside Chidambaram's residence, asking him to appear within two hours, did not mention any provision under which it was issued. He concluded his arguments by saying that the only purpose behind this was to keep Chidambaram in jail and humiliate him.

Abhishek Manu Singhvi then commenced his arguments by stating that the triple test principle was to be applied in cases of bail. Listing out the tests as flight risk, non cooperation and tampering (which comprised of two subsets-tampering of documents and tampering with witnesses), Singhvi asserted that all three tests were in Chidambaram's favour as all findings of the High Court ruled out all those possibilities. So, submitted Singhvi, "operation is successful, yet the patient must die."

He argued that if the High Court has said that most of the findings are in Chidambaram's favour, then there must be something substantial for bail to be denied. However the court said despite findings, "it cannot be ruled out" that witnesses could be influenced. With the same logic, asserted Singhvi, nothing can be ruled out. "It cannot be ruled out that the skies could fall on my head or that there could be an earthquake", but my liberty cannot be denied on those grounds, he added. The implication of finding in favour of the accused but still denying bail could be used to deny every case of bail"

Singhvi's next point was that despite 6 remand applications coming up in trial court, not once was the contention of influencing witnesses brought up. Only around the end of September did that point come up, as a last ditch effort and a desperate afterthought to defeat the grant of bail, he submitted.

Alluding to the sealed cover submission, Singhvi mentioned that there were three co-accused in the case, of which Peter and Indrani Mukherjea are ex husband wife. He speculated, since the contents of the submission were unknown to them, that they were the ones on whose word the sealed cover was based. Reiterating that he's speculating he said he was trying to see the worst case against Chidambaram to show that it was a hoax. Questioning the credibility of Mukherjea, Singhvi said he had been in jail for four and a half years in charges of murder, and that too of his own daughter. What credulity could the court give to allegations that stemmed from a person who is charged with such a heinous crime, asked Singhvi.

His next argument was that all other accused were on bail and even the 11 FIPB officials who were allegedly involved had not been arrested. Chidambaram being the one who supposedly signed the document was behind bars, he submitted.

Moving on, Singhvi submitted two principles of criminal law. Firstly, arguing the Presumption of innocence, it was submitted that Chidambaram is an accused, who is undertrial ("don't know when the trial will begin"), but he's being incarcerated. "Where's the presumption of innocence?", he asked. The second principle was that Bail is the rule, jail is the exception, he submitted.

On the issue of gravity of offence, he said it was subjective. The best way to judge gravity is by length of the sentence, and those offences which attract a sentence of imprisonment of more than 7 years in the Code of Criminal Procedure are regarded as grave.

Singhvi's final submission was that the cross appeal by CBI claiming Chidambaram to be an absconder or a flight risk actually worked in his favour. When we approached Supreme court for urgent hearing on August 20 it was said that the matter would be taken up on 21st but on that date, which was a Wednesday, it was said that the matter would be taken up on Friday, he informed. On that day, the prosecution was present in court, he continued. As per propriety, CBI should have stayed their hands as constitutional silences are more important than the constitutional letter, Singhvi added. In the meantime, Chidambaram held a press conference that evening and said he was going home and went home to Jorbagh. The CBI picked him up from there, narrated Singhvi. "They picked me up from home...They didn't pick me up from Timbuktu or a jungle...Where is the absconding? Where is flight risk?", concluded Singhvi.