Chief Justice Of India Should Have No Power To Assign Cases To Benches, Allotment Must Be Automated : Dushyant Dave 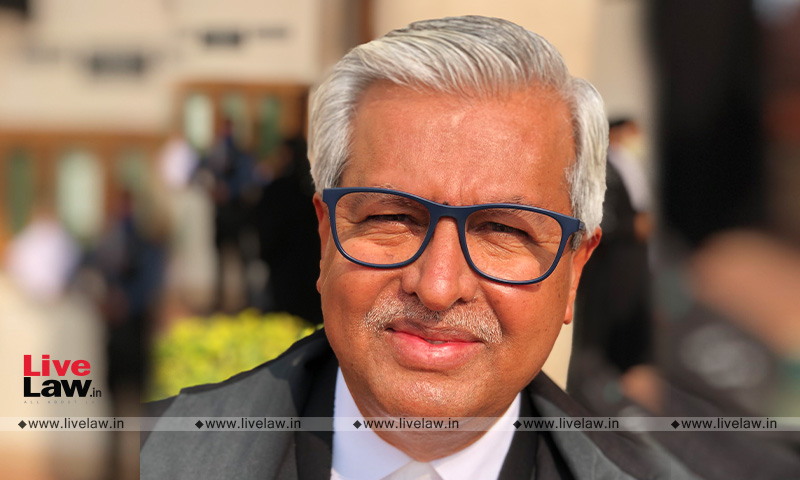 Senior Advocate Dushyant Dave has expressed concerns about the process of assigning cases to benches of the Supreme Court by the Chief Justice of India as the "Master of Roster".

Speaking in an interview with Manu Sebastian, Managing Editor of LiveLaw, Dave said :

"I feel that the Chief Justice as the Master of the Roster should have no power at all to assign any matter to any bench. The process must be completely automated and it should be so automatic and computerised that no human hand can really touch it. Yes, the Chief Justice can decide the constitution of the benches, the Chief Justice can decide allocation of subject matters to those benches, but once having done that, the computer must automatically function and go on sending the matters according to its own interpretation. A human intervention by the registry or by the chief justice is extremely disturbing".

As an example, Dave said that cases of a particular corporate house used to be allocated to one particular bench.

"How else do you explain that nine judgments of one of the largest corporate houses were delivered by a bench presided by Justice Arun Mishra? Despite my letter in 2019 June, by which time four matters were sent, after which five more were also sent by Chief Justice Gogoi.... what does this tell you? When Justice Gogoi's book was launched, he welcomed the head of the corporate entity with his family at that book launch? What does this tell you? It is really disturbing to see that these kinds of incidents can take place and everybody in the Supreme Court wants to shut their eyes! What are the judges doing? Supreme Court comprises of essentially good judges! Why are the good judges silent? Is the supreme court particular bench meant for a corporate house? This thing is happening for a long, long time! I do remember long back when Kerala's former Chief Minister was indicted or something- Justice Balakrishnan was the Chief Justice- in those days, the matter was assigned only to 1st five benches on mentioning, and the matter was sent to court 9 or 10 and immediately an interim order was granted. This is happening time and again".

Dave also shared concerns about the workings of the registry.

"There is a growing feeling among a lot of young lawyers that their matters do not get listed for months and months and matters of certain powerful advocates-on-record suddenly get listed, sometimes even though from the same judgment, the other advocate-on-record has filed a petition in the Supreme Court much earlier. All these things send an extremely wrong message. As the President of the bar, I tried to talk with every Chief Justice and I must say that Chief Justice Thakur tried to protect the system quite remarkably and there was a lot of interaction. He even created a kind of judges and lawyers group for grievance redressal; unfortunately, the moment he stepped down, the next judge did not care for that grievance redressal mechanism. There must be a mechanism. Today, judges are absolute masters. The bar has no way to tell the judges what is happening.

The other day in a matter, while appearing before a particular bench I won't name, I told the judges, when they were a little upset at my outburst, I said you come and sit down on the side of the bar and find out what is happening in the registry. These young lawyers are actually suffering. The genuine litigants are actually suffering. The powerful litigants sometimes get the quicker slot and sometimes a favourable slot".

Hope the Chief Justices will try to remedy the Registry's situation

"I had thought Chief Justice Ramana would try and correct the situation- I must say that at least on allocation, Justice Ramana has not been able to do much, although in many other areas, he has done some very good work, and he has definitely been a revelation after four successive Chief Justices failed the country and its citizens. But I do expect and hope and pray that Justices Lalit and Chandrachud and then Justice Khanna and the thereafter Chief Justices would act immediately to stop what is happening. You just can't allow this kind of situation where corporate houses are just here to succeed in every case that they argue before the Supreme Court. Their success rate is over 90% which raises eyebrows It is not done. Why should it happen? You can't talk many things in these kinds of interviews but privately there is so much to tell to the Chief Justices as to what is happening of which some of us are aware of. But we are not able to share and there is no way you can share with the judges. There must be some interaction where the judges must know what is happening and what their brother judges are doing and how they are damaging the institution and its reputation.

I must say one thing that the people at large are definitely talking about the failures of the Supreme Court in imparting justice in an impartial way. People are talking about selective benches being constituted for matters or selective matters being sent to certain benches; and even people who are unconnected with law, I have heard them talk about it and ask me questions across the country and I have to defend my institution so I don't talk much. Because you love the institution which you were a part of over 40 years. Judges must give us an opportunity when we can have a heart-to-heart talk with them. and tell them that the wrong has set into such an extent that unless they move in quickly, I don't think we can ever correct the situation".

Responding to a question if he had raised these issues before the Chief Justices during his two-terms as the President of the Supreme Court Bar Association, Dave said :

"I must say I raised them with every Chief Justice who was there- there Chief Justice Thakur who responded very very positively whenever I pointed out any transgression. And I must say that even the Secretary General in his time or even the subsequently, when Chief Justice Bobde was there, although chief Justice Bobde was quite disappointing. But the Secretary General.... Time and again, I would pick up the phone when a junior member of the bar would ring me up and complain about his matter not being listed, although urgent and filed long time ago, I would immediately give the number to them and they would ensure the matter was listed. So I used to do as much as I could. But there are limitations as president. As president, we don't meet Chief Justice just like that but only on certain occasions. But Chief Justice Thakur had given virtual, open access to me absolutely. He said that if there is any matter of the bar that you wish to discuss, you are welcome to come and discuss with me. That is how I could get the bar room for the first time in 75 years. I could get a fantastic canteen for the bar. I could get a litigant lounge for the first time in the history of Supreme Court- nobody thought about litigants till I became president. We could have a larger ladies bathroom, we could complete the housing complex for the lawyers at greater Noida. In all that, chief Justice Thakur was constantly of help. Any kind of an issue one could discuss with him. Even with the bar, his grievance redressal committee, my colleagues- vice president, secretary and senior members, we used to go and have a fantastic dialogue with senior judges from J2 to J6 and have all kinds of discussion about various issues. There was no-holds-barred discussion. Registry's top officials would be present and immediately they would be instructed to take corrective or reformative action. It was a fantastic time. But with chief Justice Bobde, not once did he agree to meet even my committee. It was a very disappointing experience. I hope things change".
If cases filed in High Courts can get listed the next day, why can't it happen in the Supreme Court?
When the interviewer pointed out to Dave that even the judges have recently expressed displeasure with the Registry for deleting cases from the list, Dave said :
"Most of these judges have come from a High Court. Some of them are appointed directly from the bar. All of them are conscious of one fact- in every High Court in the country, if you file a matter, it will be listed in 2-3-4 days. In most High Courts, like Gujarat, the matter would be listed the next day with urgent listing. And most matters will definitely come up on the notice returnable date, unless process fee is not paid in a given case. But it never happens...the courts have complete control over their boards in the High Court. The Supreme Court is singularly a failure, and these very judges who have come from High Courts, many of them have been Chief Justices of High Courts, yet are either not willing to take corrective measures or are completely wanting to ignore them. They know the problem. The young and not-so-successful members of the bar face huge problems. See, they have one or two briefs in a month. They must have access to get their matters listed in a day or two or three. Not some powerful advocate-on-record who files 50 matters in a month. These young men and women really need the support of the institution, their clients need justice. What can they show to the briefing lawyers from the states? What can they tell them? It is shocking that the registry officials are completely oblivious to this pain being suffered by young members of the bar or the not-so-successful members of the bar . And they just don't want to help them.
No Chief Justice has wanted to help these people except Justice Thakur, as I told you, in my recent memory. Things were much different, for example, when Chief Justice Venkatachaliah was chief justice, you could stand before him and mention anything and he would immediately order...Even with chief Justice Ahmadi. I thought they were extremely responsive to the needs of litigants and to the needs of the bar. They were alive to their problems. Recently, in the last 10-15-20 years, I feel they are somehow just blind to this problem. People have such huge issues. Litigants need justice quickly. If you don't give them justice, what happens? If the system can work in the High Court, why can it not work here? The master of the roster, the Chief Justice, was also the master in the High Court. But he does not interfere so much. Highly sensitive matters, he might assign to himself, but otherwise things happen normally. There is a roster, there is a subject matter and automatically, the Registry sends it. Just walk 2 km across the road to the Delhi High Court, and it never happens.
Judges will have to seriously introspect on this issue. If they don't introspect, the Supreme Court will come under more and more criticism which is not good for the institution. It is a great institution and it needs to face its problems and solve them so that the respect which it is entitled to command, respect which it did command really continues to be commanded in times to come"
In the 30-minute interview, Dave also discussed the Supreme Court's judgment in the Gujarat riots case and PMLA cases. The full video of the interview can be watched here.

PMLA Judgment A Blackspot On The Supreme Court, ED Has Been Weaponised : Dushyant Dave