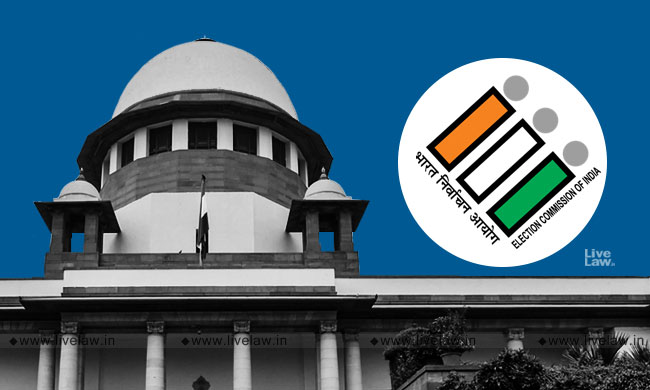 In the light of recent media reports that the Central Government went ahead with the electoral bonds scheme ignoring the serious objections raised by Reserve Bank of India(RBI) and Election Commission of India(ECI), the NGO Association for Democratic Reforms(ADR) filed an application in the Supreme Court seeking stay of the controversial scheme.ADR had filed a writ petition in 2017...

In the light of recent media reports that the Central Government went ahead with the electoral bonds scheme ignoring the serious objections raised by Reserve Bank of India(RBI) and Election Commission of India(ECI), the NGO Association for Democratic Reforms(ADR) filed an application in the Supreme Court seeking stay of the controversial scheme.

ADR had filed a writ petition in 2017 challenging the provisions of Finance Act 2017 which paved the way for anonymous electoral bonds.

Over last week, a series of reports by journalist Nitin Sethi on electoral bonds came in Huffington Post, which were based on official documents obtained by Commodore Lokesh Batra through Right to Information.

Electoral bonds are in the nature of bearer bonds, which can be transferred like currency. Since the only legal authority empowered to issue bearer bonds is the Reserve Bank of India, an amendment was made in the RBI Act to enable the issue of electoral bonds by an "scheduled bank notified by the Central Government".

This was done by inserting sub-section (2) in Section 31 of the RBI Act through Finance Act 2017.

On the basis of communications from RBI, ADR states that the central bank had flagged concerns over electoral bonds, which were described by it as "opaque financial instruments".

The RBI said that amending Section 31 will seriously "undermine a core principle of central banking legislation". Since the bonds are transferable any number of times like currency, its inherent anonymity can be exploited for money laundering, expressed the RBI.

"While the person/entity buying the bearer bond will be as per Know Your Customer parameters, the identities of the intervening persons/entities will not be known. Thus, the principles and the spirit of the Prevention of Money Laundering Act (PMLA) 2002 get affected", said the RBI Chief General manger in a letter sent to the Joint Secretary of Finance Ministry on January 30, 2017.

The RBI added that if the intention of the Government was to ensure that political funding is routed through formal banking channels so as to flush out black money, the same can be achieved through "a normal cheque, demand draft or any electronic or digital mode of payment".

"There is no special need for, or advantage by, the creation of an Electoral Bearer Bond, that too by disturbing an established international practice", RBI said opposing the amendment to Section 31.

But these concerns were summarily rejected by the Finance Ministry on January 31, by saying "RBI has not understood the proposed mechanism of having pre-paid instruments for the purpose of keeping the identity of the donor secret, while ensuring the donation is made only out of fully tax paid money of a person".

The RBI's concern that the anonymity of the scheme is a blessing for potential money launderers was left unaddressed.

On the next day, February 1, the then Finance Minister Arun Jaitley introduced the proposal for the scheme in the Lok Sabha, and the same was eventually made into law by the passing of Finance Act in March 2017.

The ADR then refers to communications sent by the former RBI Governor Urjit Patel to the then Finance Minister Arun Jaitley stating that the "issue of EBs as bearer instruments in the manner currently contemplated has the possibility of misuse more particularly through use of shell companies".

The Committee of Central Board of the RBI urged the government to issue the bonds in demat form, instead of physical form, so as to reduce misuse.

"Not only were the objections raised by the RBI disregarded, but even the suggestions made to make the scheme less vulnerable to fraud were ignored", ADR says in the petition filed through Advocate Prashant Bhushan.

The objections raised by the Election Commission of India are highlighted in the application for stay.

Also, the amendment to Section 182(3) abolished the provision that companies should declare their political contributions in their profit and loss accounts, giving particulars of the total amount contributed and the name of the party to which such amount has been contributed. Now, this requirement to show contributions to different parties have been taken away and the profit and loss account need only show the total political contributions, without mentioning the parties. This would "compromise transparency" and could lead to the "increased use of black money for political funding through shell companies" expressed the ECI.

It may be noted that the ECI has already filed a counter-affidavit in the case expressing stating the above aspects.

The reports alleging interference by the Prime Minister's Office for ordering an extra window for the sale of electoral bonds ahead of Karnataka assembly polls are cited in the application. This is stated to be in violation of the scheme, as the extra window, in addition to the ten days in four quarters of a year, is allowable only during the year of general elections.

"Thus, the Finance Ministry broke its own rules to approve the unscheduled and illegal sale of electoral bonds for state assembly elections on two separate occasions", says the application drawn by Advocates Neha Rathi and Shivani Kapoor.

The anonymity of the bonds is also questioned in the application. Quoting reports regarding the file notings made by Finance Ministry, it is stated that the government can access the donor details from the State Bank of India, which is the bank notified for the sale of bonds.

"Thus, the only people in dark about the source of these donations are the Indian public and opposition parties", ADR says.

Reports on alleged sale of expired bonds by SBI are also mentioned in the application.

Based on reports, it is stated bonds worth Rs 6000 crores have been sold and  95% of them went to BJP.

"It appears that fear with regard to electoral bonds has been proven right in light of the ruling Bhartiya Janta Party's annual audit report for 2017-18 according to which the ruling party received the largest chunk of the funds received through electoral bonds. The ruling Bharatiya Janata Party (BJP) has earned more than ₹1,000 crore in 2017-18 and is all set to be the maximum gainer of political funding in the last financial year, according to its annual returns submitted to the Election Commission", the application states.

The case has not been listed by the SC since then.