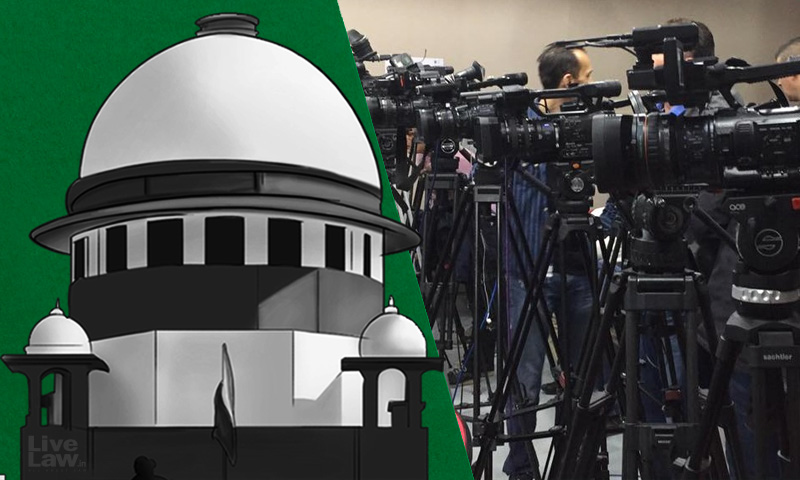 In a significant judgment, the Supreme Court on Thursday upheld the freedom of media to report the oral observations and discussions made by judges and lawyers during a court proceeding.A bench comprising Justices DY Chandrachud and MR Shah held that freedom of speech and expression under Article 19(1)(a) extends to reporting judicial proceedings as well(Case :Election Commission of India v...

In a significant judgment, the Supreme Court on Thursday upheld the freedom of media to report the oral observations and discussions made by judges and lawyers during a court proceeding.

The bench was delivering its judgment in a petition filed by the Election Commission of India seeking to restrain media from reporting oral remarks made by judges, after the Madras High Court orally said that the ECI "should probably be booked for murder" for being "singularly responsible for COVID second wave" by allowing election rallies.

The Supreme Court said that the prayer of ECI to restrain media coverage of court hearings strikes at two fundamental principles guaranteed under the Constitution –open court proceedings; and the fundamental right to the freedom of speech and expression.

The Supreme Court first discussed how the ECI's prayer will affect the concept of open courts.

Courts must be open both in the physical and metaphorical sense. Except for in-camera proceedings in an exceptional category of cases,such as cases involving child sexual abuse or matrimonial proceedings bearing on matters of marital privacy, the Supreme Court said that our legal system is founded on the principle that open access to courts is essential to safeguard valuable constitutional freedoms.

"The concept of an open court requires that information relating to a court proceeding must be available in the public domain. Citizens have a right to know about what transpires in the course of judicial proceedings", the 31-page judgment authored by Justice DY Chandrachud stated.

"Arguments addressed before the court, the response of opposing counsel and issues raised by the court are matters on which citizens have a legitimate right to be informed. An open court proceeding ensures that the judicial process is subject to public scrutiny. Public scrutiny is crucial to maintaining transparency and accountability.Transparency in the functioning of democratic institutions is crucial to establish the public's faith in them", the judgment said.

An open court system ensures that judges act in accordance with law and with probity. Public discussion and criticism may work as a restraint on the conduct of a judge.

The Supreme Court also said that the cases before the courts are vital sources of public information about the activities of the legislature and the executive. An open court serves an educational purpose as well. The court becomes a platform for citizens to know how the practical application of the law impacts upon their rights.

In this connection, the judgment referred to how the widespread reportage on Lokmanya Balgangadhar Tilak's first trial for sedition was seminal in highlighting the variance in procedural laws and rights denied to Indian undertrials.

"Post-independence, matters of seminal constitutional importance have witnessed widespread reportage in newspapers and magazines-which did not merely report on the pronouncement of verdicts, but also the quirks of the counsel and judges. These tales have now passed down as the legacy of our profession and also provide useful context for our study of the law", the Court added.

Rejecting the plea of ECI to stop media reporting of oral remarks as lacking in substance, the Court emphasized that the media coverage of court hearings was part of freedom of press, had a bearing on citizens' right to information and also on the accountability of the judiciary.

"Freedom of speech and expression extends to reporting proceedings in judicial institutions as well", the Court held.

"Courts are entrusted to perform crucial functions under the law. Their work has a direct impact, not only on the rights of citizens, but also the extent to which the citizens can exact accountability from the executive whose duty it is to enforce the law. Citizens are entitled to ensure that courts remain true to their remit to be a check on arbitrary exercises of power. The ability of citizens to do so bears a direct correlation to the seamless availability of information about what happens in a court during the course of proceedings. Therein lies the importance of freedom of the media to comment on and write about proceedings", the Court observed.

The judgment also referred to the new-age developments in court-room reporting, such as live-accounts of hearing given in twitter and other social media platforms.

The Court said that real-time updates about the hearing are an extension of the concept of "open court", and that they are not a cause of apprehension but a celebration of the constitutional ethos.

It is better for the Constitutional Authorities to accept this new-reality, than to complain, the Court said.

"Acceptance of a new reality is the surest way of adapting to it. Our public constitutional institutions must find better responses than to complain", the judgment said.

"In this backdrop, it would be retrograde for this Court to promote the rule of law and access to justice on one hand, and shield the daily operations of the High Courts and this Court from the media in all its forms, by gagging the reporting of proceedings, on the other", the Court said.

The Court also added that the High Courts have been doing commendable work dealing with the COVID crisis and the strong remarks might be a reflection of their anguish.

"A degree of caution and restraint on part of the High Court would have allayed these proceedings. Oral remarks are not part of the order and hence there is no question of expungement", the top court said in the judgment.