"We Are Always Angry, Our Anger Has No Meaning":CJI [Courtroom Exchange In Sr Adv Ashwani Kumar's PIL] 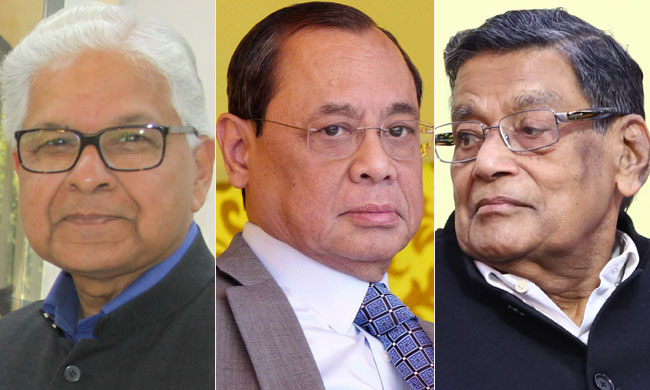 The hearing in the PIL by former Union Law Minister Ashwani Kumar for effective and purposeful legislation against custodial torture was privy to an intriguing exchange between the Senior Advocate, Attorney General K. K. Venugopal and Chief Justice Ranjan Gogoi on Wednesday morning.

When the Chief Justice asked where in his petition Mr. Kumar has made a case for directions to be issued by the court under Article 142 to govern the field pending the enactment of a law, Mr. Kumar advanced that he has not been afforded an opportunity to be heard so far, the matter earlier having been disposed on the assurance of the then-Attorney General that the recommendations of the Law Commission for a stand-alone law would be duly heeded.

"Everybody seems to say this that they are not being heard! Let us discharge the board today and hear only this!...We have been on that side and now on this side. We know the compulsions. We know how many cases are begging for our attention. Please don't remind us of Supreme Courts that have ten cases before them. With the population and the numbers we are dealing, the situation is very different!", reflected Chief Justice Gogoi."

"Don't be in a hurry. Proceed as you may. We are hearing you and nobody else...", added the Chief Justice.

When Mr. Kumar asked if the bench was upset, the Chief Justice commented, "we are always angry. Our anger has no meaning...we will hear. no other cases today or tomorrow or even on Friday. Now that the grievance has been voiced by such a senior lawyer that he has not been heard, we will make up for it"

After a marathon hearing that began right in the morning, the PIL being item 1, even as the petitioner-in-person made his rejoinder submissions at 3:30 PM, the Chief Justice insisted that Mr. Kumar walk the court through all the precedents he has cited- 'When you rely on a case, we can't read it ourselves', vocalised the Chief Justice.

"This is not the usual reply. Any number of judgments may have been referred...", the AG stood up to say.

"This is not a usual case", the Chief Justice articulated simply.

As the bench rose at 4, Chief Justice even permitted Amicus Curiae Colin Gonsalves, who was on his feet then, to resume the following day.

The hearing as it transpired :

In context of the prayer for a direction to the Parliament to introduce a law on the lines of the Prevention of Torture Bill of 2010, the Chief Justice had expressed, "okay, we will issue a writ. Government of India, please fulfill your constitutional promise towards human dignity! Where does it take you? And how would we look to the rest of the world? The Supreme Court of India Issuing directions to the Parliament on the request of a former law minister?"

Mr. Venugopal also interjected, saying, "The United Nations Convention against Torture (UNCAT) was signed in 1997. Since then, nothing has happened. He (Mr. Kumar) was himself a Member of Parliament. He has also been the Minister of Law!...so far as we are concerned, since Your Lordships have been seized of this matter, we have been cooperative. But you can't ask the Parliament to do something as that this beyond your jurisdiction..."

"Are you apprehensive that we would do it?", the Chief Justice asked the AG in a lighter vein.

Intervening, Mr. Kumar argued, "I don't know much about the law, but what I know is that it is the Constitution which is Supreme and not the Parliament. Your Lordships have a very wide power of judicial review to nudge the Parliament...I am espousing a cause; it is nothing adversarial...it doesn't lie in the mouth of the AG to say I didn't do anything! Well, that is why I am here before this court! Because Your Lordships are the ultimate custodians of the Constitution...in fact the AG should have told me that as the representative of the people, he shall request the Supreme Court to direct the Parliament. But If am I responsible, crucify me..."

The Senior Counsel tried to convince the bench that the guidelines which the Court is inquiring about are all to be found in the 2010 Bill- fair and impartial investigation; burden of proof and presumptions; protection, rehabilitation and quantum of compensation; delinquent public servants, and sanction for prosecution; Grievance redressal mechanism, and the need for speedy trial.

"Point out why these are not already covered under the Cr. P. C. and the existing laws?", quizzed the Chief Justice.

Stating that the Cr. P. C. does not even define 'torture', Mr. Kumar submitted, "Every year, there is a human rights review in Geneva, where the AG represents the country. Since 2008, it has been India's consistent stand that we remain committed to ratify the UNCAT. In 2010, a comprehensive law formulated by the Rajya Sabha Select Committee was placed before the parliament. The Law Commission in its 273rd report backed the need for a separate, holistic law...however, The lok sabha lapsed and so did the bill. I wrote to the law minister to please re-introduce this law, saying that the select committee, which represents the parliament, has done its work. That The parliament has spoken! There was No response for a long time. Then they said that they will amend the IPC and the Cr. P. C. But till now, even 'torture' as a crime is not defined anywhere. This is why India's extradition requests yield no results! The white-collar criminals who have fled away have taken this as the ground!"

"We are among the only 7 states in the world that have signed the UNCAT but not ratified it. As per the reply furnished in the Parliament, Every day, 5 custodial deaths are recorded! I am sure the actual number is much higher! There are hundreds of cases of custodial torture! How can one prolong it (the legislation) for years? All that is required today is for the government to say that the legislation shall be enacted within this much time! What is the impediment in it?"

The Senior Counsel drew the bench's attention to the recently-rendered decisions in Tehseen Poonawalla and Mahendra Chawla, where the apex court deemed it fit to urge the Parliament to pass a special legislation to address the concerns of cow vigilantism and witness protection respectively, issuing directions until such time the law comes into force.

"We have come back to square-one. By court order, we can't create an offence of the nature of the IPC", weighed in Justice Sanjeev Khanna.

The judge also indicated that in Mahendra Chawla, the bench headed by Justice A. K. Sikri was encouraged by the fact that a Witness Protection Scheme prepared by the Union of India already exists.

Further, the AG advanced that, in pursuance of the last order of this court, several states have entered their views, opining that a separate law is not necessary and that the existing provisions in the IPC and the Cr. P. C. may be amended.

"For aligning the domestic law with the international obligations under Article 253, why do we need to have the concurrence of the states? It is an Entry 14 (of the Union List) matter!", contended Mr. Kumar.

Stating that the said Entry 14 could apply to either Unitary or federal governments on such issues as the scarcity of food, the AG asserted that in view of the State List and the Concurrent List, police, public order, prisons, criminal law and criminal procedure are also within the realms of the state government.

"In a federal set-up, if you are making a law on a subject that is within the states' powers, the states' role is important. The Centre cannot intervene directly but only issue advisories and issue guidelines...", iterated the AG.

He indicated that in a case of prison reforms, earlier heard by a bench helmed by retired Justice Madan B. Lokur, as many as 50 advisories of the Central government were ignored by the states despite warnings.

"Besides, the courts as well as the NHRC have already issued detailed guidelines in this behalf", he added, referring to the 1997 D. K. Basu case and the IInd D. K. Basu case of 2015.

"To direct the Parliament to enact a law like the 2010 Bill would be to infringe on its powers...Give us some time to apply our minds and arrive at a conclusion. Then we would come to the court and Your Lordships may go into the nitty-gritties of what orders may or may not be issued", the AG rested his case.

The Counsel for the NHRC, however, extended "complete support to the cause of the petition"- "we have been approaching government after government to bring out a legislation...we had also communicated our views to the Ministry of Home Affairs as well as the Select Committee...the judiciary is doing its part, it is the legislation where we are lacking..."

Juxtaposing the definition of 'torture' in Article 1 of the UNCAT and in the 2010 Bill with section 330 of the IPC on Voluntarily causing grievous hurt, the bench asked why the latter did not cover custodial torture. The Advocate replied that the provision of the IPC applied to 'any person' and not specifically to a public servant.

"In India, we have no means of preventing torture. This is why fail in so many of our extradition pleas", she suggested, adding that the IPC only provides for punishment and not prevention as envisaged in Article 3 of the Convention.

Relying on its Article 4, she insisted that the Convention expects its state parties to frame a scheme to tackle custodial torture.

Amicus Curiae Colin Gonsalves also averred that India has repeatedly stressed at global fora its intent to ratify the Convention, even taking the unilateral pledge to ratify in its endeavour to be a member of the Human Rights Council- "the Comity of Nations requires for these assertions made internationally to be implemented!"

"Earlier also, We were averse to the matter being closed upon the Union of India's assurance that the Law Commission's report would be looked into and the needful be done in the next session of the Parliament...Now, some years have passed and, as we knew, nothing has been done...no government wants its police officers to be made so accountable"

"Bodily harm or bodily injury, as provided for in the IPC, totally inadequate in view of the drastic changes in the technologies of torture! This is why a new law is needed", he pressed.

He indicated the various forms of torture that have come to be rampant and in respect of which the prevailing laws remain largely insufficient- serious mental pain, agony and trauma; food deprivation, and forcible feeding of spoilt food or animal or human excreta; electric shocks, cigarette burns, and rubbing of spices or acids on wounds and mucus membranes; water polluted with urine or blood; rape or threat of rape; plastic bag over heads; drugs to alter memory or will; maltreatment of family members; stripping the person naked and parading in public places.

Finally, he contended that the executive power to ratify the Convention is entirely independent of the making of the law.

The Chief Justice, however, took objection at the Amicus's claim of the law being on their side- "Just now you said that fortunately, the law is on your side. You remember when we had requested you to assist us in the matter? Why should we hear an Amicus who takes sides?"