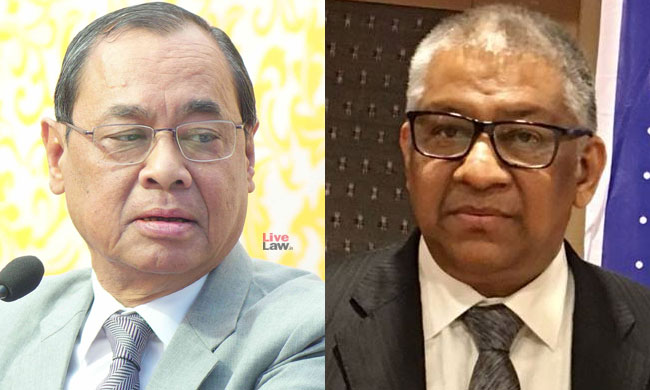 x
CJI Gogoi, Justice T B Radhakrishnan
The CJI is believed to have written to law minister Ravi Shankar Prasad on March 11, asking him to expedite the transfer of the judge.

The Centre and the Supreme Court collegium seem to have hit an impasse again, this time over the transfer of Justice Thottathil B Radhakrishnan, Chief Justice of Telengana High.

CJI Ranjan Gogoi has on March 11, for the second time in less than a month, written to Union Law Minister Ravi Shankar Prasad to act on the collegium's January 10 resolution to transfer Justice Radhakrishnan to the Calcutta High Court, reports the Economic Times.

"The CJI is believed to have written to law minister Ravi Shankar Prasad on March 11, asking him to expedite the transfer of the judge", says the ET report.

The collegium of Chief Justice Gogoi and Justices A. K. Sikri, S. A. Bobde, N. V. Ramana and Arun Mishra had, on January 10, recommended the transfer of Justice Radhakrishnan to Calcutta High Court as its Chief Justice, in the wake of the retirement of Justice D.K. Gupta as CJ of the Calcutta HC on December 31 last year. But this recommendation was sent back by Centre for reconsideration by collegium.

However, the collegium stuck by its stand and reiterated the proposal to transfer Justice Radhakrishnan on February 19, stating, "nothing new has been brought to our notice".

Although the issue is reportedly under consideration, the reason for the delay is being cited to be the less-than-warm reaction of the TRS government, an ally of NDA, to the proposed change at the helm of affairs of the High Court. With the Lok Sabha polls around the corner, the Centre is touted as being hesitant in overriding the concerns of Telangana CM K. Chandrashekhar Rao.

Another recommendation made on January 10 regarding transfer of Justice Dama Seshadri Naidu from Kerala HC to Bombay HC has been accepted and implemented by the centre.

The Calcutta High Court has been operating without a full-fledged Chief Justice since January, an issue which the CJI has supposedly flagged in his letter.

Earlier on February 22, Chief Justice Gogoi had orally remarked in Court that the needful was being done to ensure appointments of judges in High Courts. "Appointments are happening! As the Chief Justice, I am telling you that whatever is pending is pending before the Supreme Court collegium. There are almost 70-80 proposals before the Collegium and hardly 27 before the government", said the CJI while hearing a PIL by Common Cause for filling up of judicial vacancies.

In November, 2018, the CJI had taken objection to the Centre splitting up Collegium recommendations by withholding assent to certain names selectively, raising the issue with the Prime Minister. The collegium under CJ Gogoi had even decided to review all cases where the names cleared by it were held back by the ministry, and also those proposals which were reiterated but are still pending with the government for issuance of warrant of appointment.