'I Don't Think Process Can Be More Democratic Than This' : CJI Ramana On Collegium System 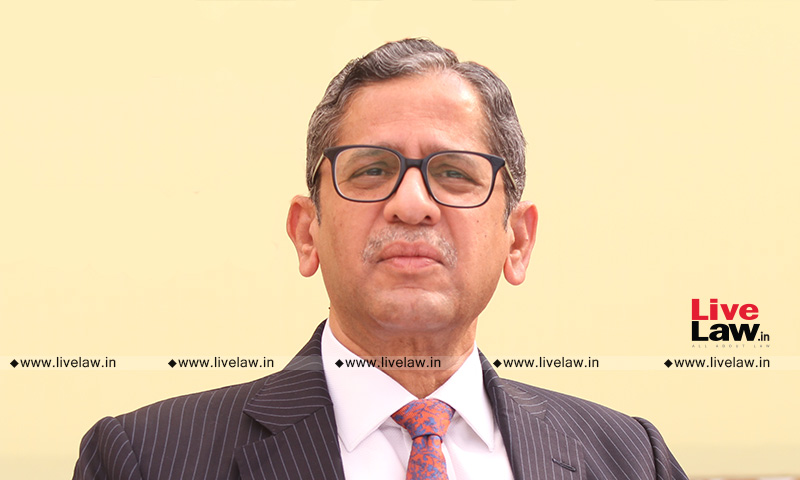 Chief Justice of India NV Ramana on Monday said that the collegium process for judges appointment is democratic as all stakeholders are consulted through a lengthy consultative process."There is an impression in India that judges appoint judges. It is a wrong impression and I want to correct it. The appointment is done through a lengthy consultative process, many stakeholders are consulted....

Chief Justice of India NV Ramana on Monday said that the collegium process for judges appointment is democratic as all stakeholders are consulted through a lengthy consultative process.

'Once we have taken oath on the Constitution and we start working as a judge, politics is no longer relevant'- CJI

CJI: "The job of the judge is not political. It is a wonderful statement, I am very happy to hear from Mr Breyer about that statement. Once we have taken oath on the Constitution and we start working as a judge, I think politics is no longer relevant. It is the Constitution which guides us. It is the principle anywhere"

[On inclusivity in the judiciary, with specific reference to India getting its first woman CJI and the recommendation to the bench of an "openly gay" candidate, both during CJI Ramana's tenure] 'In the recent appointments, we selected judges from nine different states, out of which three are women'- CJI
CJI: "The Supreme Court was established in 1950. It is 72 years old. It is relatively young. India is known as the world's largest democracy, we have one of the largest judicial networks in the world. The first woman judge was appointed in the Supreme Court after nearly 40 years and now we have four women judges, which is the highest number so far. I know it is not enough, I expect more. I am happy that the recent appointments and recommendations have generated a lot of discussion about the inclusivity. In fact, I borrowed from Karl Marx in one of the meetings organised by women lawyers in Delhi to say that 'Women of the world, unite. You have nothing to lose but your chains'. This resonated well with the people, they welcome the diversity. For me, inclusivity does not stop with having more women judges. Our population is nearly 140 crores, India is home to around 120 languages and dialects, more than 4000 communities and more than 700 tribes, it has 28 states and 8 union territories each having many regions with distinct characteristics. These social and geographical diversities must find reflection at all levels of judiciary. With widest possible representation, people get to feel that it is their own judiciary. Diversity in the bench promotes diversity of opinion. Diversity enhances efficiency. People from different backgrounds enrich the bench with the diverse experiences. A judge from rural background understands the issues of rural India better. A judge from a particular region understands the issues of that region better. A judge from marginalised section understands the issues of marginalised better. I am very happy that the outlook of my collegium members is very progressive. In the recent appointments, we selected judges from nine different states and out of which three are women. I know we have many miles to go but a beginning has been made

Justice Breyer: "Women judges in the US Supreme Court, when Judge Ketanji Brown Jackson is here, will be four out of nine. That does not mean the problem is over...Also, it is not just with women but with minorities and all kinds of people. Justice Marshall was the first black person to be appointed to this court. He was helpful on this court to tell people about a few things that the rest of them may not have experienced. So diversity of background and experience is a good idea. Though it is not the only idea- You are judges and you must be a judge. But it is an important part of it. So we are moving in that direction and I am glad that we are..."
[On Retirement and age limits] Dean Treanor to the CJI: "You turn 65 in August. For a judge, is it a young age to retire? What are your future plans?"
CJI: "65 years is too early for someone to retire. I worked for almost 22 years as a High Court judge, High Court chief Justice, Supreme Court judge and now CJI. In Indian judiciary, at the time of joining, we know our date of retirement. There are no exceptions. As for me, I am still left with a decent amount of energy, I am the son of an agriculturist, I am still left with some land to cultivate. I am basically a man of the people. I love to be among the people. It has been my nature since my student days. I hope I will find the right avenue to invest my energy for the sake of people. One thing I can say for certain is that retirement from the judiciary does not mean that I will retire from public life. So I can say that I am too busy to comment about my future retirement plans"
Justice Breyer: "I have heard certain number of complaints in India that the term is too short. We don't have any term, we can have a long term of 18 years or 20 years...You want it long because you don't want somebody thinking what is his next job. I will be 84 years old this summer. I am not so much thinking about my next job...Also, it takes time to adjust to the institution, and I suspect the Indian Supreme Court is similar. It is an unusual institution. The first few years you wonder 'can I do this job?'. You might not say it but you are thinking it. And then you say 'I can do my best and that is about it'. You get used to it, but there are all kinds of approaches, rules and how the Court works- it is an institution of government as well as a court of law, and how do those things combine? It takes time to develop all your approaches, understanding...Would it matter to have a very long retirement period? I say 'no'. Would it be better to have no period than a short period. I can't really answer that because we don't have any period..."
Dean Treanor: "Considering the US Constitution is shorter and that of India is so much longer, more detailed,how does it impact the constitutional interpretation of these two courts?'