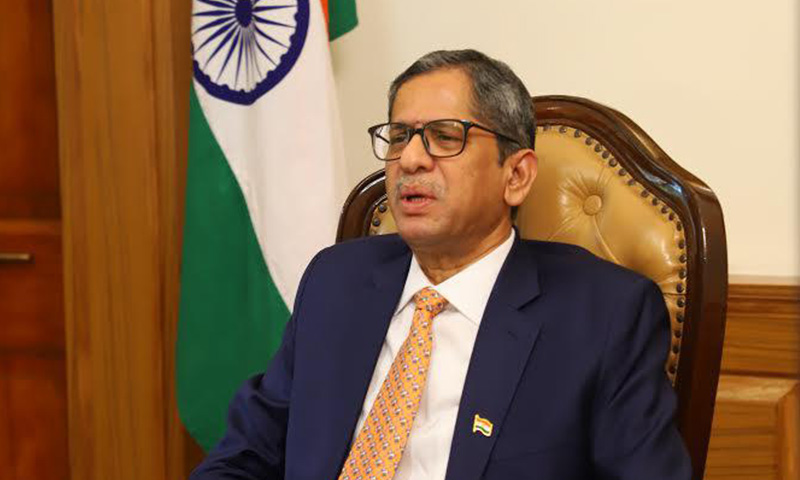 Addressing the inagural session of International Virtual Mediation Summer School, 2021, the Chief Justice of India, N.V. Ramana expressed his belief in the role of mediation in dispute resolution encouraging law students and lawyers to learn the skills. In his address, he emphasized on education as a tool of empowerment and bringing about change in society. The future belongs to mediation, he said.

In the event organised by Nivaaran-Mediators of Supreme Court of India, Justice of Appeal Vasheist V Kokaram, Judge the Court of Appeal of Trinidad and Tobago and Brain Speers, the current President of Commonwealth Lawyers Association were also present.

The Chief Justice expressed his belief in Mediation as one of the most important conflict resolution mechanisms currently, which will only continue to grow in relevance in the coming future. He referred to his address at the India-Singapore Mediation Summit. He had noted that the practice of Mediation was commonly followed in India before the arrival of the British. Emphasizing the need for a system of dispute resolution, such as Mediation, he noted

"Not only did the British establish the framework for the modern Indian judicial system, but they were also instrumental in the creation of the myth that dispute resolution, and justice, require black coats and gowns and elaborate arguments. It is time to dispel such myths and notions. The reality is most of the litigants in India suffer from many social and economic constraints. What they need is a quick, inexpensive, and convenient method of dispute resolution."

He noted that Mediation as a means of dispute resolution is cost-effective, time-saving, and convenient to parties. However, drawing a comparison between Mediation & traditional litigation, he remarked that the latter often leaves one of the parties to the proceedings dissatisfied with the result, leading to appeals to the Supreme Court, leading to judicial delays. He said that this is an outcome of the "winner-takes-all" attitude affecting the system.

He presented Mediation as a solution to this problem that signifies a shift from an adversarial attitude or position and focuses on better outcomes for all parties, contemplating a continued relationship after the end of the resolution process.

He acknowledged the less emphasized role of Mediation in furthering access to justice in the country, making it reach of parties without ample resources or time, or sophistication.

On the role of the Supreme Court in improving Mediation in India, he noted that the institution had played a crucial role in bringing Mediation into the mainstream through various judicial pronouncements resulting in the creation and spread of Court annexed Mediation in the country.

He lauded the efforts of the Supreme Court Mediation and Conciliation Project Committee, set up in 2005, which has been integral when it comes to the training of Mediators in India.

"The first batch of mediators trained nearly a decade ago, and a fresh batch was trained in May 2019. I am glad to state that, over the past two years, the Supreme Court-trained mediators have been extremely active, despite the ongoing pandemic. and have organized various events, lecture series, and discussions. The present Summer School program is one such program which can help Mediation become an important tool for "NIVAARAN" in the country," CJI noted.

He emphasized the importance of training mediators, flagging the difficulties that mediators face during conflict resolution. The first issue related to the role of a Mediator- which is now shifting to a more active, engaged role as opposed to the facilitative role which was earlier envisaged, and how a Mediator must act in such situations. The second relates to what a Mediator must do, or how "neutral" a Mediator must be, in the face of a patently unjust settlement reached between parties in unequal bargaining positions.

He proposed that issues will be resolved when a Mediator is well trained and equipped to understand and be prepared to react to any situation that arises before him. Further advocating for continuous and quality training of mediators, he noted,

"This can only happen if there is a well-designed training program for Mediators in place with a focus on situation recognition and the appropriate response. The Supreme Court Mediation and Project Committee has already created a model Training Programme wherein 40 hours of training and participation and successful completion of a certain number of mediations is mandated for accreditation as a qualified mediator."

He also remarked that training programs have to be constantly updated and modified to keep up with the best practices in the rest of the world.

He remarked the difference between traditional lawyering and Mediation while noting,

"It must also be remembered, being a successful lawyer does not guarantee similar success in Mediation. These two distinct roles require distinct characteristics. A mediator needs to be perceptive to both the parties' emotions and the underlying issues. Even with the most stubborn parties, the mediator must guide parties with great optimism and patience to find a workable settlement."

He said that while the Bar Council of India mandates a course on Alternate Dispute Resolution, more focus should be placed by law schools in the country on clinical education, with a focus on Mediation.

While remarking that the future belongs to mediation, he encouraged law students and young lawyers to learn the requisite skills and be at the forefront of creating the space for the establishment of Mediation and Mediators as a separate profession.

He concluded with the words of the Mahatma Gandhi-

"I realized that the true function of a lawyer was to unite parties riven asunder…..[T]wenty years of my practice as a lawyer was occupied in bringing out private comprises of hundreds of cases. I lost nothing thereby- not even money, certainly not my soul."