'Let The Matter Be Considered By The CJI On Administrative Side": SC On 'Application For Framing 'Live-Streaming Rules [Courtroom Exchange] 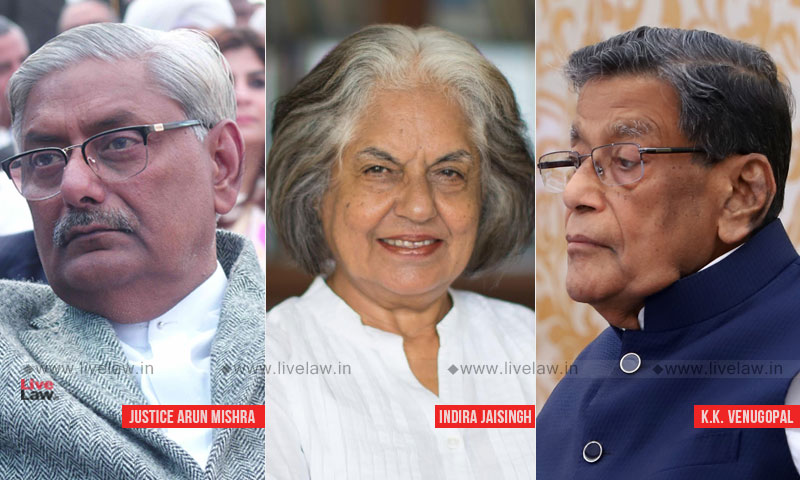 A Supreme Court bench headed by Justice Arun Mishra on Tuesday took up the application filed by Senior Advocate Indira Jaising for a direction to the Supreme Court in the administrative side to frame rules under Article 145(1) for live-streaming of matters of national importance."This judgment speaks of live streaming of hearings of public importance, particularly those before...

A Supreme Court bench headed by Justice Arun Mishra on Tuesday took up the  application filed by Senior Advocate Indira Jaising for a direction to the Supreme Court in the administrative side to frame rules under Article 145(1) for live-streaming of matters of national importance.

"This judgment speaks of live streaming of hearings of public importance, particularly those before a Constitution bench, as per the guidelines laid down in the judgment. The Attorney General has also submitted his guidelines, which were found acceptable by the court...", began Senior Counsel and petitioner-in-person Indira Jaising.

"Should we do this by a judicial order or should we leave it to be dealt with on the administrative side? Now, after this judgment, there is a provision for it, the law is there for it...it should be the Chief Justice's discretion...", observed Justice Arun Mishra.

"I am not asking for a mandamus. My prayers are very calibrative...", Ms. Jaising sought to submit.

"The project of live streaming of the court proceedings of the Supreme Court on the "internet" and/or on radio and TV through live audio-visual broadcasting/telecasting universally by an official agency, such as Doordarshan, having exclusive telecasting rights and/or official website/mobile application of the Court, must be implemented in a progressive, structured and phased manner, with certain safeguards to ensure that the purpose of live streaming of proceedings is achieved holistically and that it does not interfere with the administration of justice or the dignity and majesty of the Court hearing the matter and/or impinge upon any rights of the litigants or witnesses"., she read from the September, 2018 judgment, drawing the bench's attention to the guidelines in the judgment which themselves carry the safeguards.

"To begin with, only a specified category of cases or cases of constitutional and national importance being argued for final hearing before the Constitution Bench be live streamed as a pilot project...", she quoted from the then CJ Dipak Misra and Justice A. M. Khanwilkar's judgment.

"But there is some problem. It says 'For that, permission of the concerned Court will have to be sought in writing, in advance, in conformity with the prescribed procedure'...", pointed out Justice Mishra.

"The judgment is of September 26, 2018. It has been over a year. My limited prayer is for the matters that go before the constitution bench to begin with...All the three judges (CJ Misra, Justice Khanwilkar and Justice D. Y. Chandrachud) agreed with the proposition that live-streaming is a part of right of access to justice and open justice, hearing in open court! Everybody, whether they are present in court or not, has the right to observe!", urged Ms. Jaising.

"If the pilot project fails, there is no point of framing any rules. Then everything goes! Then there is no occasion for framing any rules, if it is found that we don't have the discipline for this direct streaming of arguments...That stage comes only if it succeeds...", observed Justice Mishra.

"You can file a IA in any case where there is a hearing before a constitution bench. Like there is a 9-judge bench, you can file an application before that bench...where is the room for us to direct anything?", ventured Justice Mishra.

"This would be a chicken-and-egg problem! They would say unless this exercise is done, we can't direct anything! These kind of applications have been filed by certain persons!", replied Ms. Jaising.

"The court considers these to be model guidelines. They have to be translated into actual guidelines", she continued, adding that the judgment notes that;

"The model guidelines are of a suggested nature and will not detract from the authority of the Court to frame Rules...Needless to observe that before the commencement of first phase of the project, formal rules will have to be framed by this Court to incorporate the recommendations made by the learned Attorney General".

When it was suggested that the judgment speaks of experimentation, Ms. Jaising argued, "Ultimately, it is the discretion of the court. I can't deny that. But what is at discretion is the guidelines! like matrimonial cases cannot be live-streamed because the law requires them to be held in-camera!"

"Why don't you write to the CJ?", asked Justice Mishra. "I have on several occasions written to the Secretary General of this court. At the last hearing, notice was issued to him and he was required to be present in person today", replied Ms. Jaising.

"There was a long debate before this court which culminated into this judgment. What has to be followed and what has to be eschewed has been set out- sensitive cases, matrimonial matters, terrorist matters. The judgment is complete as to the modalities. But the final call has to be taken on the administrative side to frame the guidelines...the second phase is as to the implementation of the judgment as to specified matters which are to be decided by the CJ...the presiding judge's permission is to be sought before proceedings before him are live-streamed...and the live-telecast shall be delayed by a few seconds to allow the deletion of any objectionable content...the Secretary General has started the process as to the infrastructure. Your Lordships direct the drafting of the guidelines. Everything else has been debated", advanced AG K. K. Venugopal.

"Judgment may not be the last word. It can be suggestive also...There may be this channel or that channel. To say that it is a compulsion to frame the guidelines not the same lines is not necessarily binding, it is not the last word", said Justice Mishra.

"If it is to go to the full court, now we are 34. What will happen? Do you follow? Section 30 of the Advocates' Act was enforced only after fifty years. 3-4 judgments were there. Article 44 is the same...the idea is that it shouldn't become like this...", continued the judge.

"You have your own internal rules, whether it has to be by majority or how...", replied the AG.

"There cannot be any judgment compelling the court on the administrative side! ('There have been judgments', contended the AG)...whether the direction is permissible? Can we direct somebody to legislate?If the CJI takes it up as the administrative head...what if we choose to do nothing at all? It will be a zero...not implemented...", iterated Justice Mishra.

The AG agreed that it be left to the administrative side.

"Let the matter go to the CJ", relented Ms. Jaising. "on the administrative side, not the judicial side", clarified the judge.

"The judgment is advisory. At that time, the CJ was party to it. Otherwise, no amount of commands to the court would do anything...",  expressed Justice Mishra.

"Please look at the wording...It is not advisory ...unless you overrule the judgment...", countered the AG.

"Even if it is a writ, it is a futile writ. Can we issue a command to the Parliament?", demanded the judge.

"No. but the Court can issue to the court itself. Even the CJ can't overrule it!", insisted the AG.

"I know my limits. We know our limits. We won't direct...", stated Justice Mishra, even as the bench was informed that the process of implementation has begun.

"The judgment is recommendatory only in the sense that the full court may want other guidelines!", pressed Ms. Jaising.

"Can you compel us to stream live?", asked Justice Mishra.

"I can't compel anybody! I will do whatever is suggested and leave it at that!", responded Ms. Jaising.

"In recognizing that court proceedings ought to be live streamed, this Court is mindful of and has strived to balance the various interests regarding administration of justice, including open justice, dignity and privacy of the participants to the proceedings and the majesty and decorum of the Courts.As a result, we allow these writ petitions and interventionists‟ applications with the aforementioned observations and hope that the relevant rules will be formulated expeditiously and the first phase project executed in right earnest by all concerned", the AG indicated from the 2018 judgment.

"You only have to direct the judgment to be implemented! It is self-operative!", he persisted.

"We won't say anything. No judicial order is needed. Let the matter be placed before the CJ on the administrative side", Justice Mishra proceeded to declare the order.

"I didn't know  when it will come before this bench...but someone has to decide 'yes' or 'no'! Instead of dismissing this application...!", advanced Ms. Jaising vehemently.

"You are not hearing. It was said that it (the implementation of the judgment) is already in process...we are not closing the doors for further applications, but we don't want to compel", declared Justice Mishra.

"Then let the order say that the judgment is in the process of being implemented?", asked Ms. Jaising, adding, "I didn't say I will enforce anything...I will pursue it before the CJ".